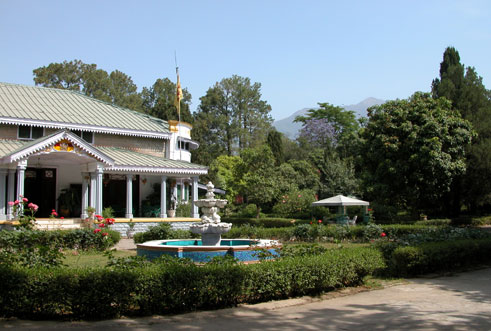 Taragarh Palace Hotel is managed by the Royal family of Jammu and Kashmir.
This palace hotel is in the name of Maharaja Karn Singh’s mother, Tara Devi.

Tara Devi was from Kangra valley, she came from a very poor Katoch family of Jaisingh Pur region in Kangra.

Taragarh Palace is situated on a 15 forested estate surrounded by tea gardens of the Kangra valley, one of the most scenic and unexplored areas of Himachal Pradesh.

Located at an altitude of 3,400 feet above sea level, Taragarh Palace is at the foot of the Dhauladhar mountains with a splendid view of the surrounding snow-capped peaks.

Formerly known as Alhilal (land of the crescent moon),the palace, was built in the early 1930s as a summer resorts. It was bought by the royal family of Jammu & Kashmir in 1951 for the dowager Maharani who lived there for several years. It is now run as a hotel by the present royal family, Vikramaditya Singh, who is eldest son of Dr. Karn Singh runs this place.

In 1931, the 27 year old Nawab of Bahawalpur built large European-style summer residence for himself up in the cool Himalayan jungle of Kangra district . He laid out lush gardens, built a glass pleasure pavilion and a mosque and christened his country palace Al Hilal ( The Crescent Moon ).

The ravishingly beautiful land of Kashmir saw many a golden age- of Ashoka, of Zain Al Abidin, of Mughal emperors Akbar, Jehangir and Shah Jahan. After the decline of Mughal authority in the 18th century, Kashmir passed into the hands of Afghan kings. In 1819, the city of Srinagar and parts of Kashmir were conquered by the Sikh armies of Maharaja Ranjit Singh. The successful military expedition was led by his Dogra general, Raja Gulab Singh of Jammu and went on to create the state of Jammu and Kashmir.