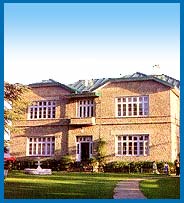 A quick getaway that you’re looking for in north India, then there are quite a few places in Himachal Pradesh which can make for a good, affordable holiday for the entire family. One such place is Chail – the summer retreat of the Maharaja of Patiala.

About 7 hours drive away from the sweltering summer heat of Delhi, lies the winding stretch to Chail. Cushioned between the rolling hills of the Shivalik range, the entire length of road has thick forests of Deodar and Pine trees. While tourist season is in summer, a holiday in this area during winter would be quite another experience, considering it snows in these parts.

PALACE HOTEL
At Chail the place to stay in is the famous Chail Royal Palace built on Rajgarh hill. It was converted into a hotel by Himachal Pradesh tourism sometime in the seventies. The original palace built in 1891 was devastated in a fire, and the palace was shifted to this somewhat plain grey stone structure in 1951. Since the time that the palace was converted into a hotel, it has undergone a lot of renovation despite which, the interiors retain their grandeur.

The palace still retains an unusual feel of a bygone era, probably because of the long, dark corridors, lit by large, ornate chandeliers. I decided to take a see what the royal chambers look like!

The rooms within the palace have been understandably named as Maharaja, Maharani, Prince, and Princess suites. While some of the upholstery and linen could do with a little more finesse, the high ceilings and innumerable pieces of antique furniture, decorating the rooms, offset the strong colour scheme and choice of fabric.