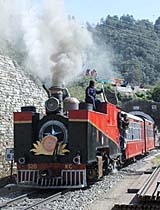 The 100-year-old steam engine, specially hired by a group of 22 British tourists to ride the 25-km stretch between Shimla and Kathlighat, arrives at Tara Devi railway station on Sunday. The fare for hiring the steam engine has been slashed from Rs 1.8 lakh($2500.00) to about Rs 58,000($1350.00) per trip following a notification by the Railways. PTI

Kalka, April 17
The popularity of Kalka- Shimla heritage rail section among rail enthusiasts from all over the world for taking the journey in the clouds, is bringing windfall for Northern Railway (Ambala division).

With UK-based tour operators, especially those dealing with rail journeys in different countries, advertising the trip on this heritage section as one of the greatest rail journeys in the world, there is a renewed interest among foreign tourists. The fact that Indian Railways Tourism Corporation (IRTC), too, is advertising the journey through lofty pines and misty mountains on this heritage section on the Net, is also adding on to the popularity.

â€œThough we get tourists from all over the world, a large number of these tourists are from the United Kingdom. Most of the people take this trip not just for the sheer engineering feat in laying the rail, but also because of sentimental reasons. Many of the tourists were here during the days of the British Raj, or their parents of grandparents were associated with laying down the rail line,â€? informs Station Superintendent, Kalka , Mr R. K. Datta.

As is the case of Rosemarie Hall, who has come down from the UK and boarded the rail motor car for Shimla from here today. â€œI was born in Karachi, then a part of India. A few months back, I discovered that my birth certificate was registered at Shimla. I decided to visit Shimla, and since I knew that the rail track was laid by the British and had heard people talk about the breathtaking view of the Himalayas offered on the rail journey, I decided to have a goâ€? she says.

They were among 29 tourists from the UK brought here by the UK-Based Great Rail Journeys, who chartered two rail motor cars for Shimla from here today. Mr Andrew Summerhayes from Great Rail Journeys, informed TNS that after a documentary on the Himalayas was aired by the BBC in London, they started advertising the Kalka- Shimla rail journey as one of the best rail journeys in the world, along with rail routes in North America, Europe, Japan and Africa.” We offered a trip on this rail section in September last year, and within 10 days we were all booked for the entire year 2005,â€? he says.

The Railways on its part is also offering all possible help to make the journey a pleasure for these foreign tourists. The chartered rail motor car is allowed to halt at any place enroute Shimla, in order to allow the tourists for taking pictures, or having a small lunch – either at Dharampur or Barog.

The chartered rail motor car journey is available for Rs 10, 283 from Kalka- Shimla and back. For the high end foreign tourist, the steam engine service on the Kalka – Shimla section is available from Shimla to Katleeghat and back (a distance of 18 km one way). Though the journey was earlier available for over Rs 1 lakh, the Railway Board notified the new rates from April 1, and the same distance will now cost Rs 58,808. The single way journey from Shimla to Katleeghat will cost Rs 27, 848. For a chartered service with a diesel engine, the one way journey on the entire stretch of this 100 year old rail section costs Rs 34,580 and both ways the journey would cost Rs 73,998.

Mr R. K. Datta, Station Superintendent at Kalka, says that even the domestic tourists have been taking a lot of interest in the rail journey. â€œThere is an unusual rush of tourists and all trains on this route are running to packed capacity. Almost 800 persons are taking the rail trip daily. From April 17-20, we are running two holiday special trains,â€? he informs.