The origins of the Kangra School which held sway over the entire Punjab Hills can be traced to Guler, which stands at the entrance to the valley bordering on the plains. Guler was a small state. Nadir Shah’s invasion and the conquest of Delhi in 1739 were instrumental in the founding of the Kangra School of painting. The Guler was then ruled by Dalip Singh (1694-1744). It was during the period 1739-40 that Hindu artists trained in Mughal style migrated to the Punjab Hills possibly from Lahore or Delhi. It is quite likely that they returned to their homes in Guler only to escape the
uncertainties of life in the plains.

The source of inspiration of Kangra painting was the Vaishnav cult of Hinduism, the love of Radha and Krishna. In this style arms of lovers are about each other’s necks, eye meets eye, the whispering Sakhis (friends) speak of nothing
else but the course of Krishna’s courtship, the very animals are spellbound by the sound of Krishna’s flute and the elements stand still to hear the ragas and raginis. This art is only concerned with the realities of life. Above all with
passionate love service, conceived as the symbol of all union. This is the spirit which parameters a number of paintings in the Kangra style which had its origin in Guler. 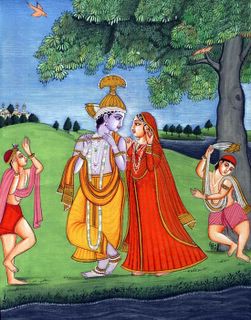 The Divine Pair! Harassed by the demon sent by Kansa, Nanda and his cowherd Kinsmen decided to move from Gokul to Vrindavana across the river. Their children enjoyed swimming in the river during the heat of the summer, while the cows sat in groups chewing the cud contentedly. Krishna, his brother Balarama, the cowherds and the gopis roamed the woods of Vridavana with their graceful trees covered with blossoms. Here Krishna and his companion played â€œhide â€“and â€“seek â€œ or sang and
danced to music. 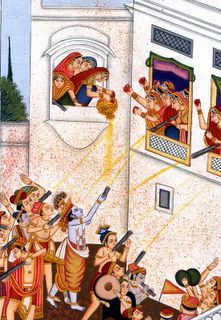 The onset of spring, occasion for much revelry and celebration, does not go unnoticed in the context of Krishna and his companions, the cowherds and the gopis, for it provides yet another occasion for the poet and the painter to establish these relationships at a different level. Wile everyone else celebrates the festival, as it is done even today in Indiaâ€”by throwing colored powder, soaking one another with colored water from syringes, and singingâ€”between Krishna and Radha, the play of Holi takes on another significance. Suddenly, amid so much noise and activity, their eyes become
locked, as the poet say, and they get drenched in each otherâ€™s love as much as they do in the water that is being squirted around.

A great many paintings on the theme of Holi being celebrated in Vraja (in the land around Mathura it is still a remarkably spirited festival) were painted, and this is among the finest. The wonderful air of festivity, the grouping of figures that leaves space in the center for Radha and Krishna to be places in relief, the range of stances and gestures, the little dramatic vignettes involving so much animation, are all handled with singular ability. But the work goes beyond these effects, and the eye is led, through the tender, encouraging eyes of the companions of Radha, to the two lovers who stand transfixed. That is where passionate attachment is seen at its most affecting, and suddenly some of the women musicians stop short, much more intent on what is happening there than on playing their instruments. 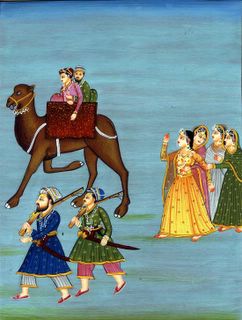 Sassi Bewailing of her lover, Punnun

Sassi a beautiful girl was born to a Brahman King. At her birth it was prophesied that she was destined to fall in love with a Muslim and would die of grief of separation while searching for her lover in a lonely desert. In order to save the honor of the family and the girl from her tragic fate she was shut in a box and floated down the Indus River. The box attracted the attention of a childless washer man, who brought her up as his own daughter at Bhambhore.Sassi grew up into a girl of dazzling beauty and attracted attention of all the young men of the neighborhood, but she spurned their advances. On a visit to garden of a rich merchant she saw a portrait of Punnun, the son of the King of
Kecham in Baluchistan and fell in love with him. 1750 AD, National Museum 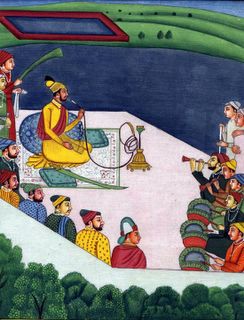 Govardhan chand listening to music, which was in the collection of Raja Baldev singh and is now in Chandigarh Museum. The Raja is seated on a terrace listening to the music of drums and pipes. The Raja is listening to music, and the air of gentle reverie is well expressed. The pose of the individual figures and the balance of the whole are admirable. In this respect it respect it resembles the finest of the Mogul paintings, but it has a delicacy and a spirituality of feeling to which the Mogul art never attains. The coloring of Kangra pictures of this period is extraordinarily delicate. The Kangra artist had the colors of the dawn and the rainbow on his palette. 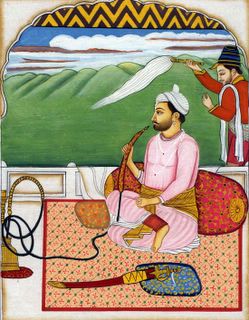 In 1809, Raja Sansar Chand employed a European adventurer, Oâ€™ Brien, who established a factory of small arms and raised disciplined force of 1400 men for him. In this painting, we can see Oâ€™Brien waving a fly â€“whish over sansar chand. It is a very fine portrait by one of the Guler artists who had migrated to Tira- sujanpur. The green background with dashes of red in the horizon is typical of the work of these artists. The character of sansar chand, proud and sensitive, is well brought out in this painting. Collection – Chandigarh Museum 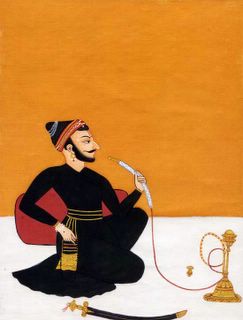 The king sitting in pavilion. He wears a black jama and turban on his head. He is smoking huqqa with one hand and in other hand a rosary. A sword is kept near him. 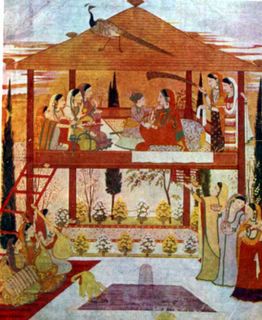 1780 AD, Chandigarh Museum. In this beautiful painting Balauri Rani from Basohli is shown seated in a pavilion talking to her son Bhup Singh. One of the maidservants is offering him a wooden toy. On the roof of the pavilion is peacock and in the foreground is a pool with a fountain. A monkey is drinking water from the pool totally unafraid. Women musicians are singing and playing on musical instruments. A servant girl is feeding a parrot. 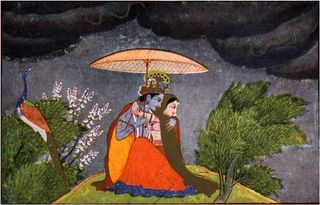 Sheltering in the Rain.

Radha and Krishna are shown sitting on the top of a mountain, sheltering from rain under one umbrella. A storm bends the branches of the trees, lightning shines in the dark clouds and rain pours from above. The peacock cries with joy,and Radha clasps Krishna, afraid of the rumbling thunder.