Shimla: Where women voters outnumber men in every election in Himachal Pradesh, the state ruling BJP has come out with the ‘Stree Sankalp Patra’ that would further strengthen the objectives of women empowerment and women-led development, Chief Minister Jai Ram Thakur said.

Talking to IANS during his campaigning, he said, “In our outgoing five-year stint, we started many schemes for empowering the women. Now in our election manifesto, we have made 11 commitments for women-led development.”

“The Congress says the Jai Ram Thakur government has done nothing. The truth is that the Congress is taking advantage of our schemes. Even their electricity and water bill is zero, but they won’t accept,” he said while campaigning in Chopal in Shimla district.

“We started many schemes for women belonging to the poor families, whose benefits are being availed by lakhs of them.”

Under “Stree Shakti Sankalp”, part of the BJP’s manifesto named ‘Sankalp Patra’, the party promised to provide 33 per cent reservation to women in the government jobs and educational institutions, establish a corpus of Rs 500 crore to give interest-free loans to women entrepreneurs to set up homestays, besides construction of two hostels for girls pursuing higher education in all 12 districts.

Countering the main Opposition Congress’ promise to provide Rs 1,500 monthly allowance to every woman above 18 years and Aam Aadmi Party’s (AAP), which is in its maiden fray, promise of Rs 1,000 per month allowance for women, the Chief Minister replied to IANS that the BJP was a responsible party. “It does what it says”.

“We worked honestly for the poor for five years. The Congress never thought about the poor. The Congress people say they will put Rs 1,500 in the bank accounts of women. This is a false promise. The Congress had said in 2012 that they will give jobs to every household. Also an unemployment allowance was announced that too was not given,” Thakur added. 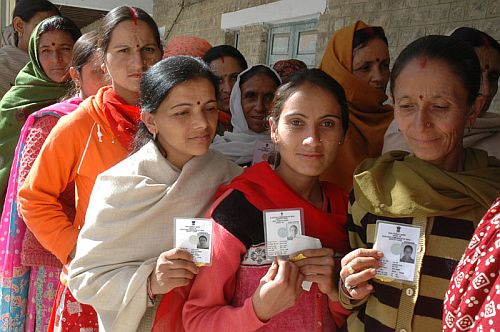 State BJP vice-president, Payal Vaidya, said the BJP was the only party that released the ‘Stree Sankalp Patra’, an agenda for women empowerment.

“This shows our party’s commitment towards women. Earlier, the party has increased the honorarium of Anganwadi workers, Asha workers, sewing teachers and midday meal workers from 50 to 400 per cent.”

An election official said the percentage of women voters exercising their franchise in the state has been on the rise since the 1993 Assembly elections.

“For almost three decades, the women outnumbered men as voters and they hold the key to the formation of every government, be it the parliamentary or the Assembly or even the panchayat,” an election official told IANS.

Social scientists attribute the increased participation of women in the democratic process to the higher literacy and awareness drives by the Election Commission of India.

Known for its healthy gender ratio, the tribal-dominated Lahaul-Spiti district every time creates a record of the women voters outnumbering men. The district, the sprawling Buddhist-dominated district, has 16,455 (52.20 per cent) men and 15,073 (47.80 per cent) women voters.

In 2017 polls, the highest polling station was set up at an elevation of over 15,000 feet at Hikkam in Lahaul-Spiti district. With 194 electors, it saw an 85 per cent turnout despite snow in the evening.

Sadly this time again, the main parties in the state — the Congress, the BJP and AAP — have not been fair to the womenfolk in the ticket distribution.

Out of 412 candidates for the November 12 elections to the 68-member Assembly, 24 are women, while 388 are men candidates in the fray.

As against the six women candidates fielded by the BJP this time, the Congress has fielded three women and AAP has six candidates.

In that election the BJP had given tickets to six women, while the Congress had three women leaders. In the outgoing Assembly there are four women legislators. They are six-time lawmaker Asha Kumari (Congress) from Dalhousie; four-time legislator Sarveen Choudhary (BJP) from Shahpur; Reeta Devi (BJP) from Indora; and Kamlesh Kumari (BJP) from Bhoranj.

Choudhary is the only woman minister in the outgoing 11-member Cabinet.

From 1972 till 2007, only 19 women have won from 36 constituencies, some winning more than once like Congress leader and seven-time legislator Vidya Stokes.

A record over 74 per cent, highest in four decades, of the state’s 50.25 lakh electorate exercised their franchise in the Assembly elections on November 9, 2017, where the ruling Congress and the BJP were locked in a straight contest.