Manali: Plastic clogged drains on Wednesday (13.7.2022) morning had water overflowing on the main roads of the tourist township here that entered into many peoples houses and flooded the bus stand area that is used by tourist to board high end Volvo buses.

Eyewitnesses said that the Bhajogi drain, flowing through the middle of Manali city got clogged and flooded a vast area as the water overflowed onto the road and nearby residential areas. At around six in the morning, yesterday, there was a sudden increase of water in the drain and flowed at high speed, which entered houses of the people residing in ward one, two and three. The flow turned the nearby Volvo Bus Stand into a drain.

“Flash flood in Manali are entirely manmade because of poorly maintained drains, plastic bags, haphazard constructions and shrinking open spaces leading to to accumulation of water on roads after a heavy downpour,” says Vikramjeet Singh Thakur, an old time resident of Manali. 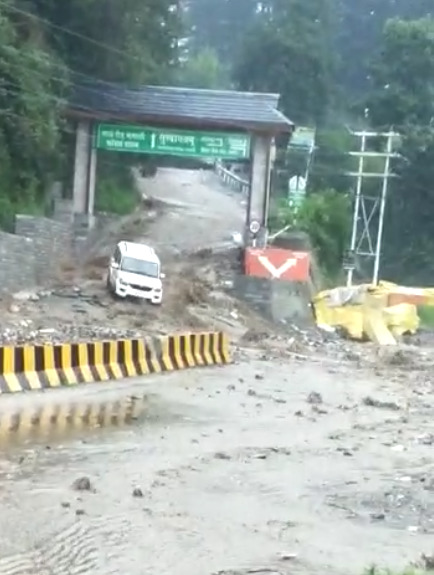 “Citizens need to behave responsibly,” he adds, “to ensure that plastic bags or used food plates are not thrown in the open or in the neighbourhood drains.”

“It is true that poor drainage and sewage systems are the real cause of urban flooding. Encroaching upon public lands also is a problem with puts pressure on the existing civic infrastructure,” said Large.

“There is urgent need to fix accountability of government officials and municipal authorities if drains are not properly cleaned. Strict penalties should be imposed on people throwing garbage in the open,” says Rajesh Sharma another resident of Manali.

Chaman Kapoor, president Manali Nagar Parishad says, rapid urbanisation and population growth have contributed to drainage systems getting congested. These drains are not able to take the pressure of huge water accumulated due to heavy rain, leading to water logging,” However, he added that steps were being taken to improve garbage disposal and ensure that plastics do not find their way to drains.