Nestled deep in the trans Himalayan cold desert landscape of the western Himalaya, in the Spiti region of Himachal Pradesh, lies a tiny unknown, sleepy hamlet of Gue. Situated at an elevation of over 10,000 ft, Gue is relatively unknown to the outside world. The hamlet holds great importance from the defence point of view, as it is situated a few kms away from the Indo-China Line of Actual Control (the LOC). Today, Gue is in limelight for another reason, and is attracting a large number of visitors, including tourists as it boasts of having the only known naturally preserved mummy in the country.

A colourful large cemented gate marks the deviation towards the village on the Sumdo-Kaza state highway, around 2 Kms from Sumdo. What follows is a steep 9 km climb by a narrow winding road, leading to an opening in the valley, where the small quiet village of Gue is located, comprising of about 25-30 odd houses. In the recent past, the existence of a mummy has created a buzz among the visitors, especially the fast-increasing tourism circuit in the Spiti valley –‘as to how this mummy came here’, ‘who does it belong to’, and ‘how it found its place in a glass box case’, in this up to now, a non-existent remotely located village.

As per my numerous visits to the village, spanning over two decades, the literature consulted, and the information collected from the villagers, the mummy at Gue, supposedly belongs to Lama Sangha Tenzin, a Buddhist monk, from the Gelugpa order of Tibetan Buddhism, who is thought to have died around the 1500s, and thus is believed to be around six centuries old. While there are no official records to claim this; there are certain scientific facts that can be looked upon in this aspect. Carbon dating by a team from Vienna has revealed the Tibetan mummy dating back to the year 1475, making it over 600 years old.

During 2002, a team of researchers from Oxford University of California, also came forward for research on the mummy. With the help of carbon-14 dating, they found the mummy has been in the same position since 1420 AD; they also mention that nothing was used for preservation (as stated outside the mummy temple). The mummy was found in a sitting position, with a rosary in one hand, and all body parts intact and a strange belt running down its spine, from neck to lower parts of the body. This suggesting that Sangha Tenzin, was from a group of monks who were practitioners of “Dzogchen”; one among the highest forms of meditation. The strange belt tied around the body could be a ‘Gomthak’ that monks used to tie around their neck to their knee while doing such meditation.

Originally from Tibet, Sangha Tenzin had come to Gue for meditation at an age of around 45 years. It is also stated by some, that the monk had started the process of self-mummification, while still being alive, and is considered as the only mummy of a Buddhist monk in India, that is naturally mummified. His remains were discovered in 1975 and a tomb was established in the village.

Then came the devastating earthquake of Spiti in 1975, that created extensive damage in various parts of the valley and destroyed the tomb as well. However, the mummy was buried in this earthquake, leading the body to be rediscovered by ITBP personnel in 2004, when they were digging in the area. Others say that the ITBP came upon the mummy while digging trenches in the area; either way, ITBP takes full credit for finding the mummy in the year 2004.

Once found, the body was placed in a small hutment above the village. Later on, it was shifted to its present location a little higher up besides the new gompa, naturally preserved in a thick glass box, without the use of any chemical preservatives. Presently, what you find there inside the box case, is a naturally preserved dead body, not wrapped in any kind of bandage, but completely dried up, and the eyes, teeth, and hair on its head still very much intact. His fist is around one leg while the chin is resting on his knee. 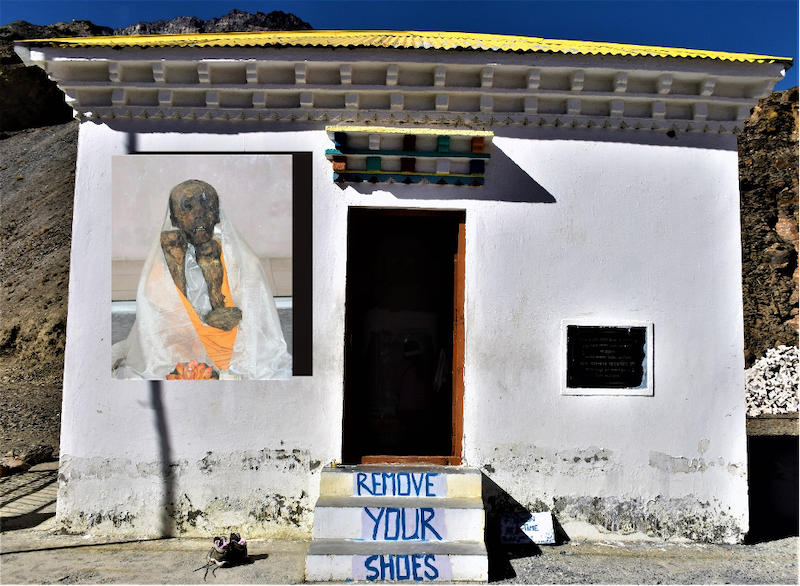 Mummification, as history proves, was not a common Tibetan practice, as it was in ancient Egypt. Tibetans in old times would either offer their dead to the vultures and fishes, or would have them cremated. However, some of the high priests were mummified and bodies kept around, out of devotion, as a guide, or someone to believe in and follow. Almost all Tibetan monks were mummified or preserved in a squatting position, rather than the reclining posture. Another significant difference between the Egyptian and Tibetan mummies, is in the way of preservation. While the Egyptians used the embalming technique with several chemical ways to preserve the body of their dead; Tibetan mummies were said to be natural, meaning that the monks wilfully put themselves to death, through starvation and meditation. This process of self-mummification is known as ‘Sokushinbutsu’. Using the advanced yogic postures and surviving on barks, they used to deprive their bodies of all juices, fats, and bacteria, which preserved the body with no chemical embalming required. The monks would also consume poisonous cycad nuts and lacquer tree sap, in very small doses, which would help remove moisture from the body, while they were still alive; besides it would deter flesh-eating bugs after their death. This seems to be the same way that lama Sangha Tenzin, is believed to have mummified himself, and hence its completely dried-up body.

Mummy – the very word is enough to arouse anyone’s curiosity. Now the question is that, are such mummies real? Well mummies are definitely said to be real; however, they’re not the monsters that you come across in scary movies. Generally, a mummy is a dead body that has been preserved. Some ancient cultures believed that preserving a person’s body after they died would help to preserve their soul or spirit. A number of mummies are found across the globe, but the oldest mummy is that of Lady Dai, of China’s Han dynasty (206 BC-220 AD), now more than 2,000 years old, who still has her own hair, is soft to the touch, and has ligaments that still bend, much like a living person; and is widely recognized as the best-preserved human mummy in history.

Apart from these scientific and logical explanations, there is also the folklore that the village folk tell you with pride and devotion – who believe that the mummy has been looking after the well-being of their village for centuries, now. One version states that the monk sacrificed his life to rid the village from the menace of scorpions. Villagers believe that after the death of numerous village folk, the monk became concerned and sat in meditation, for the betterment of the villagers, and asked his disciples to entomb him. They say that as his soul left for heaven, a rainbow appeared across the blue sky, and since then, the village has never seen even a single scorpion till date. Another version states that in ancient times, the important trade route between India and Tibet passed through Gue village, and as a result, the village prospered. But slowly the traders found better and shorter routes, greatly effecting the prosperity of the villagers. It was this prosperity of the people, that the monk wanted to restore, and thus sacrificed his life. Whatever, being the reason, the villagers hold the mummy in great esteem and worship it like their protector. The local villagers also believe that the mummy is alive, and hence refer to him as the “Living Buddha”. They also claim that the hair and nails of the monk are still growing. Prayers are offered daily at the shrine by the locals, wherein they burn incense and light lamps. When I first saw the mummy around 20 years back, it was at a different location below, not kept in a case, the body then being much brighter. However, the burning of lamps and incense has turned the mummy much darker now. Sometime back the mummy was shifted to its present location near the gompa, and is now placed in the glass box case.

Spiti is among the most sensitive border areas of the country, and until a decade ago, this region had not seen much of tourism despite, the fact that it harbours a mesmerising landscape and culture, one of uniqueness and amazement. Of late, the Spiti valley has seen a sudden rise in tourism and, the uniqueness of this mummy at Gue, has provided an added attraction to the visitors. It means that if it was not for its mummy, the small village of Gue, would probably have forever remained unknown to the world. But now, every year, the mummy attracts a steady stream of visitors, despite its remote and inhospitable location.

Here is a society divided between the scientific and the mystical, but one thing is for certain that this mummy has put the small village of Gue, not only on the national, but also on the global map. To think of whether or not this was his intention, but the mummy of Lama Sangha Tenzin, does provide great attention to this small lazy village and wants its people to prosper. Today, a lot of tourism activity can be seen in the village in the form of the many homestays that have come up. There is a steady flow of tourists to see the monk mummy. If it was not for him, not many would know about the existence of Gue, or ever care to visit this remote village.

On Tuesday (3rd May, 2022), I was at Gue on a field survey for research on a Salix project (funded by the Indian Council of Forestry Research & Education, Dehradun), and witnessed a good number of tourists driving to the village to see the mummy. I have been visiting Gue on many occasions, since the mid-nineties, but this time around, I made it a point to pen down a write-up for the general public – to create awareness about the mysterious mummified monk of Gue – and as the villagers of Gue greet you on arrival – ‘Julley’.