Shimla: Charna Devi, 49, a woman farmer from Chagaon village uphill Tapri in Kinnaur district of Himachal Pradesh has been contributing significantly in agriculture fields all through. Life was just run-of-the-mill for this little educated tribal woman as she worked from hearth to the field almost unnoticed.

Launched in Himachal Pradesh in 2018, the Prakritik Kheti Khushhal Kisan Yojana (PK3Y), however, came as a turning point for her when she was picked up for visit to Kurukshetra along with other farmers from the state for exposure to natural farming.

“I could have never thought of going beyond Shimla. The travel not only changed my outlook towards agriculture but taught me so many other things,” Charna Devi said, who is now a member of a women farmers group in the village formed in 2019 as a part of PK3Y, besides being a motivator for natural farming in the area.

The group has over 20 women farmers, who have adopted this low cost, non-chemical and climate-resilient Subhash Palekar Natural Farming (SPNF) technique (being promoted under PK3Y) on portion of their individual farms for the cultivation of apples, rajmash, garlic, maize and traditional crops like Ogla phaphra and Koda. 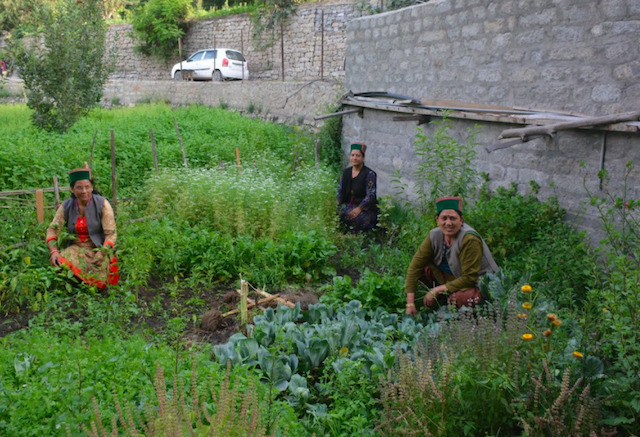 “It never happened earlier. For the first time the women farmers are attending training camps in the village, gaining knowledge and are creating awareness among others to adopt this technique,” said Kumari Prem Pyari, another farmer. She hastened to add, “We are now like a family in this group and help each other not only for preparing farm inputs like jeevamrit, ghanjeevamrit etc, work in agriculture fields and motivate others, but find solutions for each other for other personal or social issues as well.”

Chagaon is not just one instance of the pleasant change the PK3Y is bringing in the lives of women farmers in the state with a focused approach. Apart from individual women farmers, the effort is being made to encourage the women to take up natural farming collectively for better results across the state.

The knowledge imparted to the women farmers and their capacity building through training, exposure visits to other farms under PK3Y is doing more good to them than just providing them the option of healthy and sustainable agriculture for livelihood. The knowledge has visibly instilled confidence in women farmers in totality and has led to their inclusion in decision-making at home.

As is the case of these 20 young women farmers in Khaushshah village near Jhakri in Shimla district, who earlier stuck to the four walls of house because of family engagements. Since they formed the Prakritik Kheti Mahila Khushhal Kisan Samiti in the village in 2019 (registered in 2021), they have stepped out of their houses to work in the fields with a new role to set an example for others to follow.

Shared Harshita Rana Bhandari, 28, President of the Samiti, “We were contributing in farms earlier, but routinely. The apple orchards were not giving good results due to overuse of chemicals and the expenditure was increasing. But when women were specifically approached for natural farming under PK3Y and attended trainings on the technique, we were motivated that we can also contribute significantly with knowledge.”

Harshita is educated upto 12th standard and is now leading the natural farming initiative by propagating it among other women in the village.

The women farmers group is doing natural farming individually on land measuring around 12.5 bigha and SPNF technique has helped them take multiple crops alongside apples, like pulses and vegetables, which not only supplement their family income but the farm health also.

Over 1.5 lakh farmers in Himachal Pradesh have so far been trained in SPNF technique. The number of women participants in all the training sessions was reasonable and the results in the field are encouraging.

So much so that they are breaking the mindset barriers at home and in society with the new confidence they have attained with the latest information and knowledge.

“Everyone doubted me when I talked about adopting SPNF technique at home. My husband once threw the dung and urine of desi cow that I collected for natural farming. However, when I persuaded my husband to try it and get training in SPNF, he agreed. He was happy with the results. Both of us are now doing natural farming on more than 5 bigha land and growing 20 types of fruits and vegetables and other farmers in the village are also showing interest now,” said Jaswinder Kaur, 50, from Kanshipur in Paonta Sahib block in Sirmaur district.

Kaur is part of the women farmers group and publicises natural produce through Whatsapp and Facebook for a better marketing network.

At many places, the groups of women farmers doing natural farming are collectively making pickles, chutneys, garlands for marriages and other items to add on to their livelihood from agriculture.