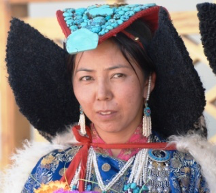 Ladakh, meaning the “land of high passes”, a Trans Himalayan plateau in the North of India. It is at times referred to as “Little Tibet”, because it has been strongly influenced by Tibetan culture and is inhabited by an admixture of Indo-Aryan and Tibetan people. The culture is traditionally rich, more akin to those of neighboring Tibet and other Central Asian countries. Supposedly, the original population may have been Dards, an Indo-Aryan race down from the Indus and the Gilgit area.

The landscape is referred to as the high-altitude cold desert with unique flora and fauna. Like the landscape itself, the culture, tradition and lifestyle of the people in the region are different from those of the rest of the country. The people traditionally lead a nomadic pastoral life and practice and follow their rich cultural traditions very diligently. 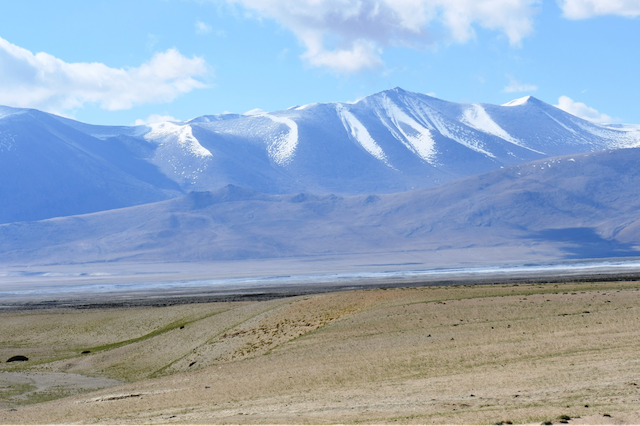 Here, I bring to focus one such unique tradition from a remotely located village of Kukshow, where they celebrate ‘Snola’ the festival of flowers. Kukshow village sits in the lap of the trans-Himalayan region, between the Zanskar and the Ladakh ranges of the cold desert area. The village is listed under the very remote Shakar – Chiktan Taluk, in the district of Kargil, located at an elevation of 3,500 m near longitude and latitude of 34.44836° N and 76.62428° E respectively. This small sleepy village is located 45 Kms east of the district headquarters of Kargil and almost 100 Kms from Leh. It is an off-road village which has a unique location, hidden from the outside world, but nevertheless a treasure house of unique flora as well as rich culture. Here majority depend on agriculture for their livelihood with barley, wheat, buckwheat, peas and beans being the main agricultural products. Apples and apricots are grown by them in warmer regions at lower altitudes near the Indus. 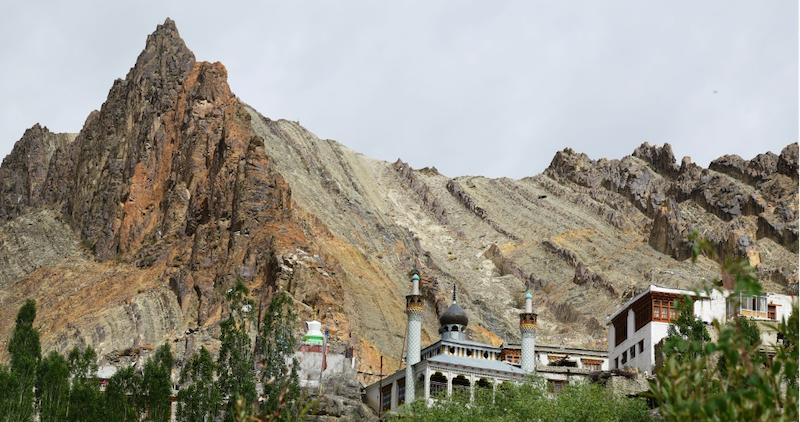 The vegetation of this region is an admixture of more of oasitic vegetation and less of desertic vegetation. Oasitic vegetation mainly comprises of indigenous species growing along the water streams in addition to some exotic flora while the desert vegetation is made up of plants adapted to very little rainfall, high-velocity winds and extremes of temperature. The village is among the oldest civilization in Ladakh and is specially recognised for its unity between both the Buddhists and Muslims who live in great harmony, setting a great example, even today. The village gonpa (monastery) is believed to be more than 700 years old. The village also has two very ancient palaces (Toto-khar and Pato-khar) which were supposedly used by the soldiers of the king to protect the village.

The festival of Snola is an annual much-awaited celebration at Kukshow and falls on the 16th and 17th of July month each year. It is mainly a Buddhist festival which, however, is equally important to the majority Muslim community of the villages, who readily participate and enjoy the activities undertaken in its celebration. The village portrays a rare epitome of harmony as the two residing religious communities of the village share cordial relations amongst each other. More so, the place of worship in the village is also shared with one half a Gompa and the other half the Masjid. We were told by an elder, that the religious communities were formed much later and that there was initially no specific religious community in the village. Snola is an exuberant and colourful festival for the celebration of the native wildflowers with which they share an intimate relation. The festival is celebrated for two days with feasting and dancing open-hearted. 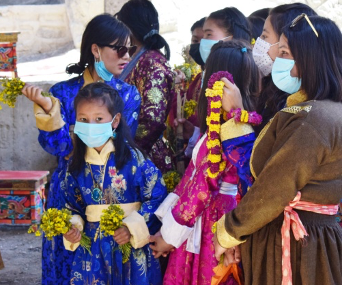 The festivities begin during the previous evening with the drinking of the local drink ‘Chang’late into the late-night accompanied with rhythmic beating of the drums, singing and dancing. The next day various religious ceremonies take place in a cutout sequence of events. It begins with an early morning arduous trek uphill the steep mountainside above the village, to collect the native mountain flowers for the religious ceremonies to follow. Interestingly, it is the privilege of the young, unmarried girls to collect the flowers. They come out dressed in beautiful, colorful Ladakhi attire, each prettier than the other. Even the elderly women folk are adorned with rich traditional attire and ornaments of turquoise passed on from one generation to the next. 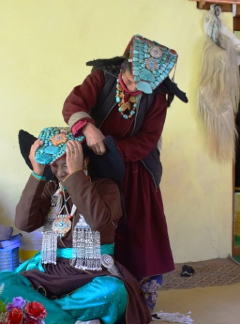 The Yellow Himalayan poppy, locally known as “Shondro” is the main flower of the festival. This flower is highly fragrant and is burnt in admixture with Shukpa twigs – it is believed to be auspicious and is supposedly burnt to purify the surroundings. Besides, the branches of willow (Salix spp.) and wheat from the field are collected and all these are then presented as offerings to the local deity called “La”. After making their collections, these girls then return down the hill slopes and proceed towards the commonplace of worship in the village. They are now accompanied by the villagers and the local village band, singing and dancing merrily. Amidst the chanting of the Lamas, the religious ceremony is held where the villagers hand over their floral offerings to “La”. 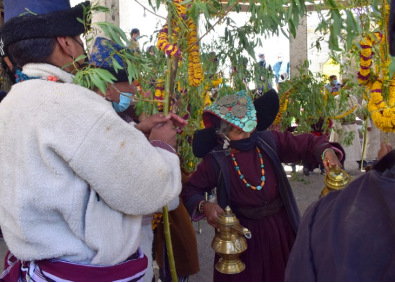 This entire ceremony is done in order to please “La” which in return bless the village and its residents from all evil and bring prosperity as a whole. The festivities are followed by a grand feast which is relished by the villagers and then the endless dancing, drinking Chang and singing follows throughout the night. This festival truly marks the vibrant nature of the tribal communities and a break from the harsh climate and rugged terrain and difficult lives of the tribal folk. Elsewhere, we are today losing touch with our local cultural traditions and celebrations, but here in Kukshow the community is still celebrating with the same majestic grandeur and simplicity.