The Mughal’s ruled the Indian sub-continent for a span of almost three centuries. They transformed the culture of the region together with their gardening style and left behind strong footmarks, very much visible today. However, we often relate to them with invasions, wars, conflicts; the creative side of theirs being lost in the noise of the battles they fought. Here in this write up I would like to highlight the role of Mughals as nature lovers – The Naturalists. 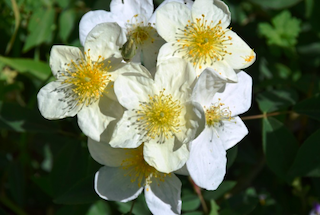 The Mughal’s, starting from the earliest invader; Emperor Babur (1526-30) followed close observation of nature. They had always been keen observers of the natural resources surrounding them. Babur showed great interest in the detailed description of plants and animals, both back in his native place in Central Asia and also during his conquest of India.

He is credited for bringing many plants from Central Asia (probably Persia) to India. Noteworthy, among them being the white musk rose (Rosa moschata var. nastarana H. Christ), the accepted nomenclature now being Rosa moschata Herrm. 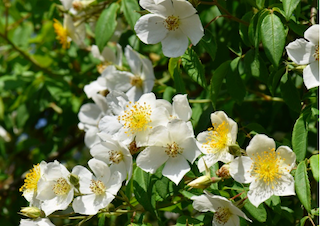 However, botanists are not clear about the origin of the musk rose, as this species has been in cultivation since ages. But Viru and Girija Viraraghavan, who have devoted their life working on roses in India, credit Babur with its introduction to India. His fascination for flowers, especially the rose (gul in Persian) was so deep that he named his daughters Gul-chihra Begum, Gul-izar Begum, Gul-badan Begum, and Gul-rang Begum. Other species of roses were also brought from other countries, as there is mention of queens bathing in rose water and later the process of development of attar from roses was discovered by queen Noorjahan, Jahangir’s pretty wife. Empress Noorjahan who also discovered the making of rose oil in India probably used the Damask Rose (Rosa damascena bifera).

Jahangir (1569 – 1627), the great grandson of Babur, and also the fourth Mughal Emperor, was also a first rank naturalist. He was sensitive towards nature, besides possessing artistic acumen, had laid many gardens in India. Jahangir is well known for his passionate interest in plants and animals, and his court painter Mansur was frequently commissioned to produce detailed and scientifically accurate images of Jahangir’s collections of flora and fauna. One of his significant recordings was that of the majestic lily ‘Crown Imperial’ (Fritillaria imperialis L.) during Jahangir’s visit to Kashmir in the spring of 1620. He termed it as ‘Bulanik’, which later became the Mughal favourite; found etched in numerous sculptures and paintings of the Mughal era. Another plant introduced was the ‘Bokhara’ tulip (Tulipa linifolia L.), from Central Asia, which was probably the earliest botanical illustration from the era.

The architectural legacy of the Mughal’s, in the form of grand forts, tombs, mosques across India needs no introduction. They also laid numerous gardens, especially in the northwest part, which they called ‘Charbaghs”, the four-fold gardens – providing a glimpse of paradise on earth (Garden of Eden). The love of trees was a passion with the Mughal’s and it was visible in these gardens, where trees of all kinds – flowering, fruiting and shade-providing were appropriately landscaped with springs and waterways. A large number of myriad species from Central and Eastern Asia and the Americas were introduced in these gardens. Prominent among them being a variety of Lilies, Poppies, Larkspur, number of forms of Narcissus tazetta, Crocus, Iris, Cockscombs, and Marigolds. These flowers are also predominantly visible in their arts and sculpture; the reason being that because traditionally, living creatures and humans were not shown in Islamic art. Therefore, the flowering plants provided subjects that were non-controversial and at the same time appealing to the eye. Some of these beautiful Charbaghs are the Mughal Gardens (Rashtrapati Bhavan, New Delhi), Shalimar Bagh (Srinagar), Nishat Bagh and Chasma Shahi (Srinagar) and Taj Mahal Baghs (Agra). Babur has been credited with the inception and development of these gardens. Later, Akbar built some gardens in Delhi and Agra while Shahjahan, more precisely, built the famous ‘Taj Mahal’ in memory of his favourite queen’ Mumtaz Mahal’, with the design of the gardens. Though Jahangir did not build any magnificent garden, he focussed on their development and also enriched these gardens with flowering plants. The prominent native trees included Dhak (Butea monosperma (Lam.) Kuntze), Parijat (Nyctanthes arbor-tristis L.), Mulsari (Manilkara kauki (L.) Dubard), Kewda (Pandanus odorifer (Forssk.) Kuntze), Champa (Magnolia champaca (L.) Baill. ex Pierre), Padri (Stereospermum chelonoides (L.f.) DC) and Neem Chameli (Millingtonia hortensis L. f.). All these trees had been selected for their sweet fragrance, either from flowers or the foliage.

Two important trees introduced during the Mughal era are, the ‘Chinar’ (Platanus orientalis L.; native range being Eurasia from the Balkans to at least as far east as Iran) and ‘Cypress’ (Cupressus cashmeriana Royle ex Carrière; the native range being Arunachal Pradesh in the Eastern part of the country). Today, the Chinar has become naturalised across Kashmir and is seen as a living heritage of Kashmir, their State tree, a symbol for the region, and more importantly, a part of its soul. Chinars are considered as the symbols of the Persian influence on the heritage of Kashmir, visible in their arts and crafts.

Most of the lineage of the Mughal Dynasty, truly justify themselves being referred to as the Naturalists of the bygone era. They were very much aware of the benefits of the natural world and thus glorified it in their palace gardens and the specific Charbaghs across their empire. As a true naturalist, Emperor Babur expresses his love for nature in the following words:

My heart, like the bud of the red, red rose,
Lies fold within fold aflame;
Would the breath of even a myriad Springs
Blow my heart’s bud to a rose?