Manali: Cold swept winds dropping temperatures to below freezing point has not deterred motorists from moving in and out of Lahaul valley as traffic through Rohtang Tunnel touched 5,450 vehicles for the first time since it was thrown open to traffic in October.

Till last year, all vehicular traffic to Lahaul would normally stop by 20th November because of heavy snow on the 13,058 feet high Rohtang Pass would cut off the region for the winter months that could extend to May or June. 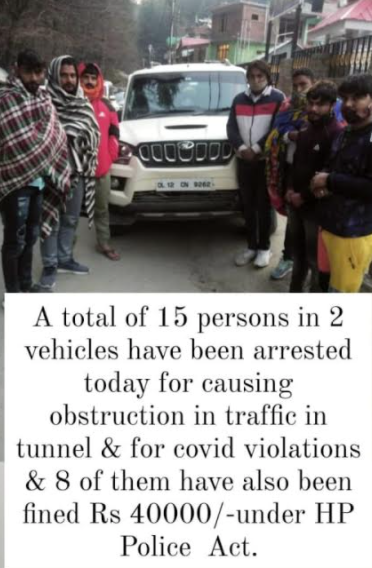 District police chief Gaurav Singh stated that 2,800 automobiles entered Rohtang Tunnel from the Manali side and 2,650 from the Lahaul side of the tunnel. “This was the very best variety of automobiles utilizing the road on a single day since its inauguration in October,” said Singh.

Every additional thousand vehicles at Manali Bailey Bridge were facing delays because of the Green Tax Barrier and to manage the slow pace in crossing at the Bailey Bridge connecting the left bank side. All vehicles going beyond Solang Nala towards the tunnel were compulsorily headed up to Atal Rohtang tunnel South Portal & then U-turns were facilitated there. No overtaking was permitted between Palchan & South Portal, he added.

About traffic violations, Singh disclosed that 15 persons in 2 vehicles had been arrested for causing obstruction to traffic inside the tunnel and for violations of special Covid related regulations. The persons violating the traffic regulations had been fined Rs 40000/-under HP Police Act, said Singh. Since the opening of the tunnel, a total of 25 persons have been arrested for stopping inside the tunnel and obstructing traffic.

Opening of the tunnel has led to a tourist rush to this beautiful land that is crisscrossed by high ranges and the valleys sheltering some of the biggest glaciers, including the Bara Shri Glacier, in all of the mighty Himalayas.