Shimla: The near threatened and rarely seen Himalayan serow, a goat antelope, has been sighted and captured in a camera by the state wildlife wing in Himachal Pradesh’s remote Spiti Valley for the first time, officials said on Saturday.

The place of sighting is close to the Indo-Tibetan border.

Earlier, Himalayan serow sighting in the state was reported from the Great Himalayan National Park (GHNP), a Unesco World Heritage site in Kullu district, in 2018. At that time, it was caught on a camera trap laid by the park authorities in the Sainj side.

This solitary #Serow, recently spotted in #Spiti valley, was the first time the animal has been seen in this remote region. pic.twitter.com/i46xzbPYx7

GHNP Deputy Ranger Roshan Lal Chaudhary said that the sighting of the Himalayan serow in nature is very rare.

“It is an extremely shy animal and its habitat is dense forests. Only in winter, it’s sighting in the GHNP is possible when it migrates to lower elevations,” he said. 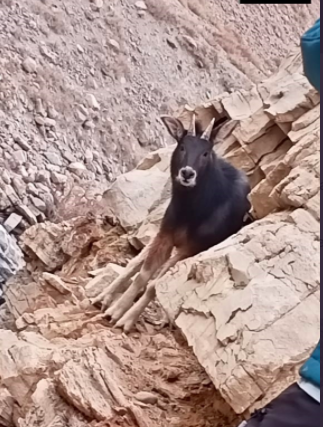 Chaudhary said one could encounter signs of serow like pellets, resting places, and footmarks, but it is almost impossible to spot the animal.

“In 2018 only once its sighting was recorded in a camera trap installed in the GHNP,” he said.