It is no secret that an overwhelming proportion of the Indian diaspora abroad roots for Mr. Modi, mesmerized by his hallucinatory vision, “Sholay” persona, and unkept promises. The current of nationalism courses strongly in their veins, perhaps to assuage the latent guilty feeling of having deserted their country for a better life abroad. And yet, safely insulated by a few thousand miles and cushioned from the daily shocks in this country, they like to believe that India is becoming a Valhalla under Mr. Modi. The grass, after all, is always greener on the other side- especially if you don’t have to do the mowing.

The BJP is far too shrewd to have missed this joker in the rigged pack of cards it has been dealing out for the last six years. According to official figures, there are 10. 17 million NRIs who are registered to vote in Indian elections ( but rarely do so because under present rules they have to come physically to their respective polling booths to cast their vote). The importance of this captive vote bank for the BJP cannot be overemphasized: it translates roughly into 20000 votes per Parliamentary constituency, which perhaps is more than the average winning margin for a seat! The BJP is not wrong in considering this an almost captive vote bank.

This is the actual backdrop against which we must assess the latest proposal of the Election Commission of India ( ECI ) to allow NRIs to vote in all elections via the ETPBS ( Electronically Transmitted Postal Ballot System ). The dog whistle is loud and clear and the ECI has an acute ( albeit selective) sense of hearing. On the face of it, this appears to be a progressive step but is not: it is a cold-blooded, calculated, discriminatory gambit and raises many questions.

First, why should NRIs be given the right to vote at all as long as they stay abroad? They have no stakes in this country and are usually in the queue for citizenship of their adopted country. They pay no direct or indirect taxes in India. Many of them do derive some income in India from bank deposits, equity holdings, rents, savings accounts, etc. but most of them pay no tax on this also, either in India or in the country where they are resident/working. Yes, they do send almost US $ 70 billion in remittances, but then the recipients of this money in India do get to vote, so why should the NRI enjoy a privilege that other citizens do not? The battle cry of the American war of Independence was ” No taxation without representation! ” The logic in the case against NRIs is ” No representation without taxation.” The poorest migrant labourer from Bihar has a better claim to the vote than the richest NRI because he pays a tax even when he buys a kilogram of salt, whereas the latter pays nothing ( in India ) on the millions he makes in Silicon valley. But millions of labourers rarely get to vote ( as we shall see) because of systemic deficiencies.

Second, why should NRIs have any say in determining who, or which party, forms a govt. here when they will be completely untouched by the effects of any decision taken by this govt.? The citizen who lives in India has to suffer the consequences of his choice and therefore has a vital stake in govt formation. The NRI is safely cushioned from the consequences of his vote, therefore his nationalism, or capitalism, or Marxism, or Luddite-ism, should not be allowed to influence the process here. It is like allowing a non-shareholder of a company to cast his vote at the AGM. 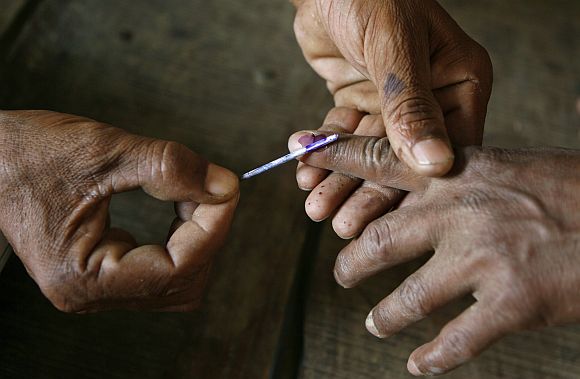 The ECI’s recommendation to allow electronic postal voting for NRIs alone is also wrong because it is selective, discriminatory, and elitist on three counts. There are tens of millions of citizens in this country who are unable to vote because they cannot access their polling booths: the ECI has not shown any urgency or concern to give them a similar facility as it has now recommended for the NRIs.

According to the Census 2011, there are 45.40 crore migrants ( mostly labour) of which 28 crores are eligible to vote- they constitute 35% of the total registered voters in the country! But most of them are unable to vote because they are by definition migratory, moving from state to state or place to place, have their votes in their villages but cannot afford to go back to their villages to cast their vote.

The number of people suffering from certified disabilities is 21.90 million; they too find it difficult to vote in a country where public spaces are not at all disabled friendly. Merely providing a wheelchair at a polling booth is only a symbolic gesture, the real challenge is getting from the residence to the booth, and negotiating the long queues there.

A third category that is discriminated against is Senior Citizens. Even if we ignore the people in the 60 + category ( 104 million ), that still leaves 13.73 million people in the 80 + group, for most of whom even stepping out of the house is fraught with risk.

The vast majority of voters in these three vulnerable categories go unrepresented in our electoral process because they are unable to access the polling booths. This, incidentally, is the primary reason why their welfare seldom features in the govt’s policies. One would have expected that the ECI and the central govt. would have devised a scheme to first extend the benefit of ETPBS to them, before doing so for their blue-eyed NRIs. For these are voters living right here, not thousands of miles away: surely they should have at least an equal if not greater say in choosing a government to rule them. The technological architecture- Aadhar, internet connectivity, mobile phones, ID verification process – is already available to enable the ETPBS for them also, so why this obsession for the NRIs alone?

By all means, give the ETPBS to the NRIs if you must, but give the benefit first to the citizens who reside here but have been disenfranchised by either the vagaries of fate or our own policies. This would ensure greater participation of the actual citizens of the country in our democratic process.