Lucknow: Prime Minister Narendra Modi is all set to lay the foundation stone of the Ram Mandir in Ayodhya on August 5. From 1528, when the Babri Mosque was established in Ayodhya, to its demolition in 1992 and then the legal battle many people played their roles. Let’s have a look at the prominent faces of the Ram Mandir movement. 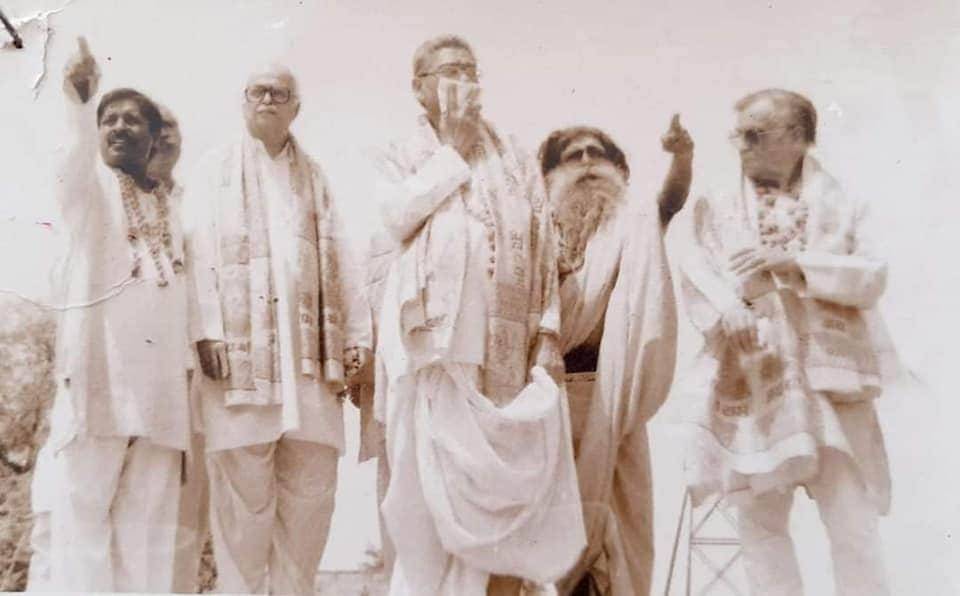 Advani was the mascot of ‘Ram Janmbhoomi’ campaign as he took out Rath Yatra from Somnath on September 25, 1990 to reach Ayodhya on October 30, 1990. It was a mass mobilisation of Kar Sevaks that made a decade old BJP, a political face of the Ayodhya movement. Advani’s Yatra was stopped by then Bihar Chief Minister Lalu Prasad Yadav on the orders of then PM VP Singh. Advani is the founding member of BJP and later became the Deputy Prime Minister in the Vajpayee government.

Born in 1926 in UP’s Agra, Ashok Singhal saw the Ayodhya movement right through the stormy developments ranging from Shilanayas, Kar Seva and to the demolition of the structure. He was among one of the organisers of the first VHP Dharma Sansad in 1984 in New Delhi, which was the starting point of Ramjanmabhoomi Temple movement. Gradually, Singhal became the mascot of the Ayodhya movement and he also fasted unto death on this issue and advocated the temple construction till his death on November 17, 2015. From an RSS volunteer in 1941, he rose to the post of chief of Vishwa Hindu Parishad (VHP) – an active arm of Rashtriya Swayam Sevak Sangh. 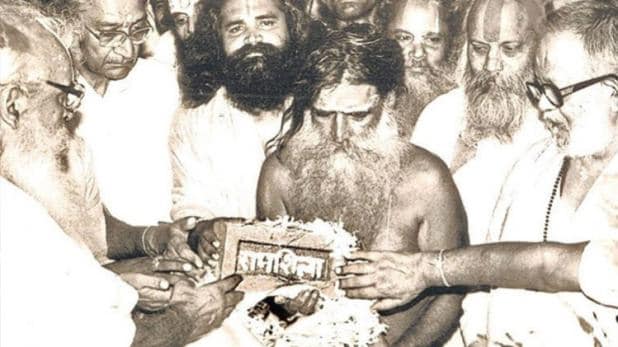 The former head of the Ram Janmabhoomi Nyas in Ayodhya, Mahant Ram Chandra Paramhans led the battle for Ram temple for more than 50 years. In 1934, he played a key role to mobilise Hindu activists to take over the structure in Ayodhya. Later, post-independence in 1949, Mahant was instrumental in installing the statue of Lord Ram inside the structure. Then the Nyas approached the court, staking claim over the land and fought legal battle till the mid 80s. Born in Bihar, Mahant Ram Chandra Paramhans died in 2003.

Murli Manohar Joshi was active in the Ram Mandir movement alongside LK Advani. He was made an accuse in the FIR and it was widely speculated that he was present in Ayodhya when the structure was pulled down. He was the president of Bharatiya Janata Party then (1991-1993) and also represented different Lok Sabha segments of UP in the parliament and remained the Union HRD minister in the Vajpayee government. 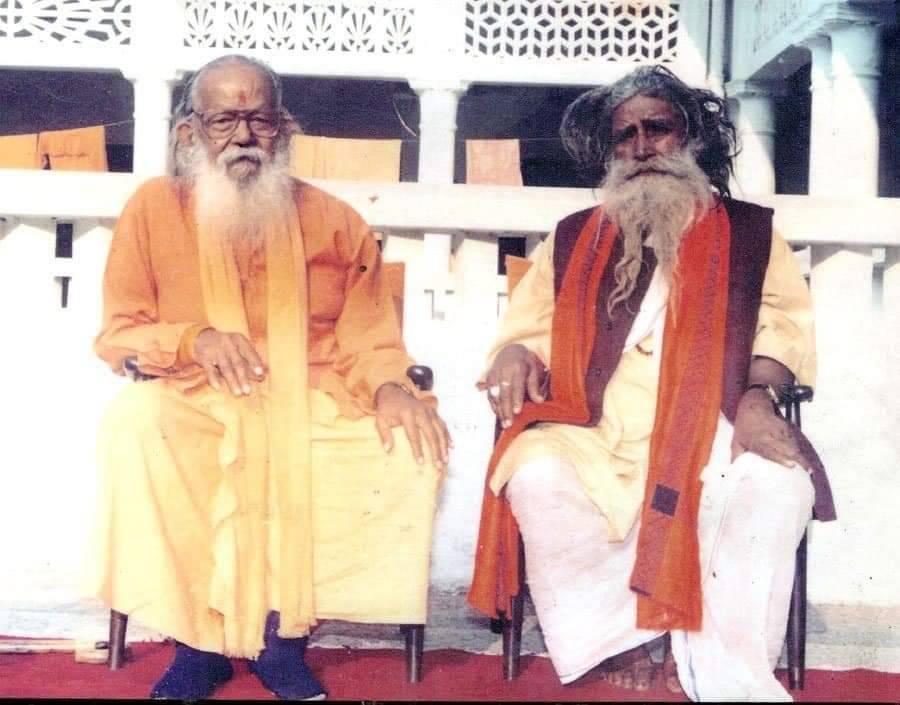 Mahant Avaidyanath was the head priest of Gorakhnath Temple and played a major role in Ramjanmabhoomi Movement. He founded the Sri Ramjanmabhoomi Mukti Yagna Samiti in 1984. He also launched “religious processions with Hindu nationalist slogans” from Sitamarhi in Bihar to Ayodhya, in September the same year. He also exhorted people through his sermons to vote those who promise to safeguard and ‘liberate’ Hindu religious places.  Mentor of current UP Chief Minister Yogi Adityanath, he was also a Hindu Mahasabha politician and represented Maniram assembly segment in the state assembly, he later went on to win from Gorakhpur Lok Sabha seat on Hindu Mahasabha and then on BJP tickets. He died in 2014.

A Sadhvi, who remained Chief Minister of Madhya Pradesh and union minister in the first term of Narendra Modi govt was amongst the active leaders of the Ram Janmbhoomi movement and through her fiery speeches, attained national prominence. She was among the right-wing leaders present in Ayodhya on December 6, 1992, when the structure was pulled down. Liberhan commission, that submitted it’s report in 1997, held that she incited Karsevaks through her speech to commit violence, however, she denied it. She remained unapologetic about her role in the movement and as well as in the demolition of the structure.

Katiyar was an MP from Faizabad (Ayodhya) when the structure was pulled down in 2012. Katiyar founded the Bajrang Dal– youth wing of VHP in 1984. He started his political journey as Akhil Bharatiya Vidhyarthi Parishad worker and then spent time in RSS as pracharak. The Dal was founded to steer the Ramjanmbhoomi movement. Known for his fiery speeches, Katiyar remained in the controversy for his statements against a particular community. He represented Faizabad in parliament thrice as Lok Sabha member and once as Rajya Sabha MP.

She remained associated with the RSS and associated outfits. She was one of the founder members of Durga Vahini—women wing of VHP. She played a major role in the Ramjanmbhoomi movement. In fact, she was among one of the three prominent women leaders—Vijaya Raje Scindia and Uma Bharti– of the movement. She is one of the accused in the structure demolition case.

Kalyan Singh was Uttar Pradesh chief minister when the structure was demolished on 6 December 1992. In 1991, Kalyan Singh government acquired 2.77 acres of land around the “Babri Masjid’’ complex for the purpose of tourism promotion by issuing a notification. Later in July 1992, right-wing organizations dug up the land around the complex and built a cemented platform and VHP declared it as foundation of Ram Temple. When Kar Seva was scheduled for December 6, 1992 in Ayodhya, he assured the Supreme Court that the structure (mosque) will not be damaged. But the Kar Sevaks pulled down the structure.

Hashim Ansari was the oldest litigant in the Ayodhya dispute, who died in 2016. He had been associated with the Babri Masjid case since 1949. He was arrested after the violence in Ayodhya, followed by the placing of idols of Lord Rama inside the structure. The administration locked down the place but he gave a call for Namaz and Faizabad court sentenced him for two years in 1952 for breaching the law. Later in 1961, he along with few others became the main plaintiff in the ‘Ayodhya title suit’ that was filed by the Sunni Central Waqf Board in the court of Faizabad civil judge.

He was Imam of Delhi’s Jama Masjid and played an active role to support the Babri Masjid in Ayodhya. He was involved in the talks prior to the demolition of the structure. He was appointed the Shahi Imam of Jama Masjid in 1946, died in 2009.