The People’s Linguistic Survey of India (PLSI), Vol. XI, Part II, (2017) lists 24 languages / dialects used across HP. But each of these 24 is not a separate, standalone language / dialect. One of the Pahari languages, the Bagali for instance (spoken in parts of present day Solan and parts of adjoining Bilaspur district), has a number of sub-languages like Kuthiari, Kunihari, Mangali and Mahalogi. Such sub-language / dialect links apply to all the 24 recorded / recognized languages in Himachal Pradesh. The number of mother’s tongues becoming stupendous.

The 1961 Census of India had recorded 1652 languages being in use in India. However, it was decided to exclude languages spoken by less than 10,000 people in the 1971 Census, which brought down the figure to 108 languages.[2]People’sLinguisticSurveyofIndia

So, if we talking of using the mother’s tongue in the first 5 years of schooling, then the teachers need to speak the mother’s tongue of the child? This means that Primary teachers have to be local and locally recruited? This could prove to be a huge change in existing teacher training and recruitment policies and will be opposed strongly by the inveterate education vested interests / mafia? There are neither lessons, nor reading material nor books even in a small fraction of our myriad mother’s tongues. Practically and politically, therefore, Mother’s tongue is not an option for teaching primary kids. Over much of North India the default mother tongue would be Hindi or the state’s official language. This has been the case so far anyway.

In the absence of what Central Government means by switching to mother tongue, it is not clear how the NEP changes / proposes to change the medium of instruction?  A possibility is that English as a medium of instruction could be banned if the bi-lingual option mentioned in the NEP, 2020 boils down to Hindi versus English? The death knell of English medium schools?

There is talk of the tried and failed 3 language formula, which is neither here nor there. The sad fact is that in Primary schools our system has consistently failed to make children reach basic language proficiency in one language as numerous ASER reports have confirmed over the years. We are again being told that research says kids can learn several languages quickly.

Interestingly, despite the general nationalistic brouhaha over mother tongue and national / state language, and the Government persisting in trying to disadvantage/ block the use of English to get “rural” students into Central jobs, the following table is revealing: 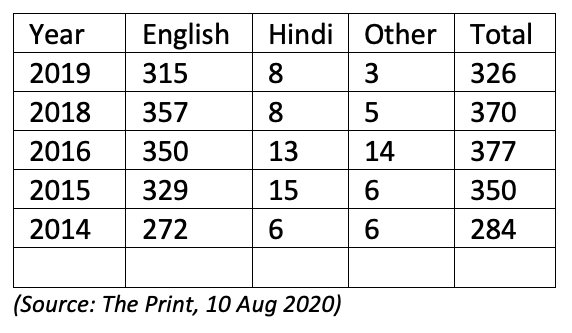 Similarly, the medium of instruction in school for the civil servants was overwhelmingly in English.

Given the current state of disarray in schools and push to ‘Indianise’ education generally, the apprehension is that the switch to mother’s tongue will become a tussle between Hindi versus English. With easily one of the largest school going kids population in the world with most doomed to indifferent government education and a growing number clamouring for English medium schooling, it would be very interesting to see how schooling unfolds with reluctant parents and children being made to choose in favour of Hindi in place of aspirational English?