In Uttar Pradesh, Congress this time is at its lowest tally in Lok Sabha (1) as well as Vidhan Sabha (7).

Rahul led the party in 2017 polls while Priyanka was in-charge of half of the UP and even lost it’s family bastion Amethi.

One thing that the Gandhi family-controlled Congress party must understand that people want real leaders and not the ones that look like leaders.

She had over 40 LS segments to look after including family bastions of Raebareli and Amethi, where she had been filling in for her mother Sonia Gandhi and brother Rahul Gandhi for long a time during poll campaigns. Her debut as an active politician was not promising as the Congress scored it’s lowest in UP and even lost Amethi to BJP’s Smriti Irani. State wide, Congress’ vote dipped by just over 1% to 6.36%.

One thing similar between Priyanka and Rahul Gandhi, besides having born in Gandhi family is the dilemma.

Priyanka Gandhi is in the same dilemma that Rahul Gandhi was in when it came to leading the Congress from the front in Uttar Pradesh, a decade ago. Many senior, as well as junior leaders, feel that the Congress’ revival in Uttar Pradesh is a key to its nationwide stimulation.

Congress workers were hopeful that Priyanka will contest election from any of the eastern UP seat while some old Congressmen wanted her to challenge Prime Minister Narendra Modi from Varanasi. Insiders say that the family was not sure about it and kept the party workers in dilemma for days, later announcing that she would not contest elections.

In recent times, 2009 poll results were best for the grand old party in Uttar Pradesh. Several Congress leaders had then opined that Rahul should lead the party in UP for 2012 assembly polls if not willing to take any responsibility in Dr Manmohan Singh’s UPA II government. However, 8 years later, Rahul joined hands with Akhilesh Yadav, the then UP Chief Minister for UP assembly polls but swept away in the BJP wave. Congress in 2017 assembly election hit its lowest tally of 7 assembly seats in Uttar Pradesh—the home state of Nehru-Gandhi family.

2019 election result was a setback to the family and the party as Rahul lost from Amethi—something that party would have never imagined. Priyanka’s leadership in eastern UP reduced it from 2 seats in 2014 (Amethi and Raebareli) to just Raebareli Lok Sabha seat. 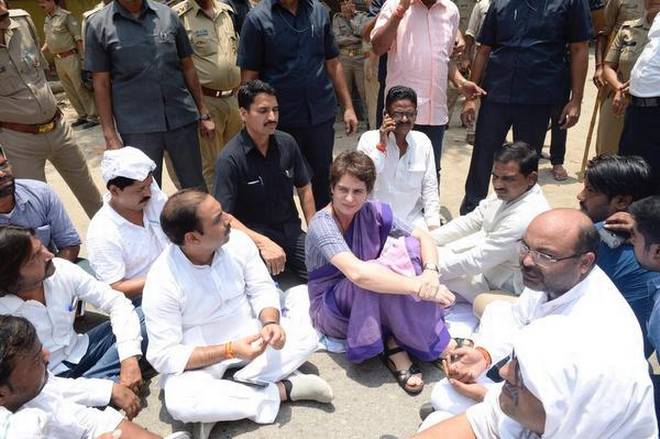 During elections, there were strong rumours that Priyanka will work from UP Congress office, where some of the Congressmen said Indira used to work from. A room was prepared for her besides the rumours of her shifting to an old house belonging to her family in Lucknow’s Gokhle Marg.

But after the election, Priyanka tried managing Congress affairs in Uttar Pradesh remotely from New Delhi and mostly on twitter. She, however, tried to make direct connect with the public during incidents like Sonbhadra massacre but that was a rare moment.

A senior party leader in Uttar Pradesh, who once was considered close to Gandhi family said, “During UPA’s first term, Rahul should have worked in Uttar Pradesh and led the party in assembly polls. As it is he was not willing to shoulder responsibility at the national level, he should have stayed here to stimulate the party.”

Recently the Modi government asked Priyanka to vacate the government accommodation and Congress is apparently trying to draw political mileage from this. Isn’t it the flawed strategy of the Congress party? However, it has fueled another wave of speculation of Priyanka settling in UP.

Defending the family and its members for Congress is understood. But at a time when people love crackdown against VIP culture, Congress’ defense may harm Priyanka’s prospects who recently dared the UP government saying, “I am the grand-daughter of Indira Gandhi”.

This is not the first time but earlier when Gandhi’s family’s Special Protectees Group (SPG) cover was withdrawn, party workers took to the roads but it hardly made any difference.

After BJP, BSP gained from 2019 LS polls as it secured 10 seats from nil in 2014. But the fact is after Mayavati, no other BSP leader has the grip over its ‘disciplined’ cadre.

War of words ensued between two women leaders after a recent attack, in which Priyanka accused BSP of favouring BJP while the latter accused the grand old party of series of mistakes over the years.

Political experts opined that any party would love to control the BSP’s cadre—Dalit vote bank in Uttar Pradesh. Congress, which so far has not significant community support is reluctantly but moving ahead in the same direction. In 2019 polls, Priyanka also had a meeting with Bhim Army Chief Chandrashekhar Azad. Now Chandrashekhar Azad has floated a political outfit named Azad Samaj Party (ASP).