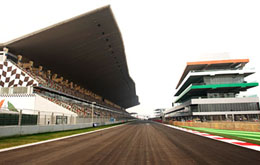 New Delhi: For all their lavish praise for the organisation of Formula One Indian Grand Prix, the journeymen would love to see hassle-free visa processing, adding in the same breath that things have improved this time around compared to last year.

Officials of the world governing body for motor sports, FIA, and regular faces at the paddock agree that getting the Indian visa has been ‘less painful’ this time, but the process can still be made easy for the Oct 26-28 event.

“My Indian visa is in the process of being sorted out — I have handed over my passport and am hoping to get it back by Tuesday before I fly out in the evening. But there’s no way of knowing until I hear from the consulate that it’s ready for collection, which is annoying,” said Kate Walker, F1 editor of Girlracer.

Walker applied for the visa in the first week of September and despite all possible assistance from race organisers, Jaypee Group, is waiting for her visa. She missed the inaugural Indian Grand Prix because she could not get the visa in time and she does not want to miss it this time.

“The people I’ve been working with in India (Jaypee officials) have been incredibly helpful, but the employees in the London consulate are hard to deal with, and don’t acknowledge requests for help made by the Indian race organisers or the FIA,” she added.

A Jaypee official said most problems occur when person is applying for the visa outside of his native country.

“Situation has changed after 9/11. A thorough check is important before the visa is issued. But by and large, problems arrive when lets say a French national is applying from the Indian consulate in London. That also takes about 10 days whereas if you are working in your country, then it takes about three days to get the visa,” the official said.

An FIA official said that India’s inclusion on the F1 calendar has been a welcome one and an efficient visa procedure will only add to the event’s success in the future.

“We were in a shock last time around. Teams, drivers and media faces problems while getting the Indian visa. This year has been a lot better but the problem persists. Getting the clearance in other Asian countries is a lot faster than in India,” the official said.

“We faced similar issues in China when the Shanghai race started in 2004. But now there are no hassles at all. I expect the same from the Indian authorities in the future. Getting the visa in time is critical to the success of any grand prix. The time is of utmost importance as you got to attend 20 races across the globe in less than a year,” the official explained.