Dharamshala: Senior congress leader GS Bali questioned the delay in arresting the second accused in a scam about purchase of personal protection equipment by the health department for combatting the Covid pandemic.

Talking to the media at Kangra, Bali, a former minister disclosed that the second person, other the then director of health services, was held on Saturday, after many days since the health director was arrested in the purchase scam.

“The scam is big and there are many big names involved,” said Bali, adding, “resignation of BJP state president itself is proof and other big names will be exposed soon.” He asked chief minister Jairam Thakur to make the vigilance investigation transparent.

The government must put all culprits behind the bars soon to prove that it is working for the welfare of the public, he said. “Delaying tactics were indicative that the authorities were trying to hush-up the matter,” the congressman said.

“Apart from corruption in the health department, another scam has come to light at the Rajiv Gandhi Engineering College, Nagrota Bagwan,” he alleged, “where Covid warriors – the Safaai Karmchari’s, were being cheated by the contractor, who is said to be a BJP man.”

“The institution has been declared a Covid care institution and the BJP man is looting the poor workers, with the government remaining silent about it,” said Bali.

Opposition congress and GS Bali’s concerns aside, the newly appointed Director General Police of Himachal Mr Sanjay Kundu has his task cut out and has lined up urgent meeting with Special Investigating Teams (SIT) handing the “Malicious Complaint Regarding Ventilator Purchase” and “Fake Degree Scam” for Monday afternoon. 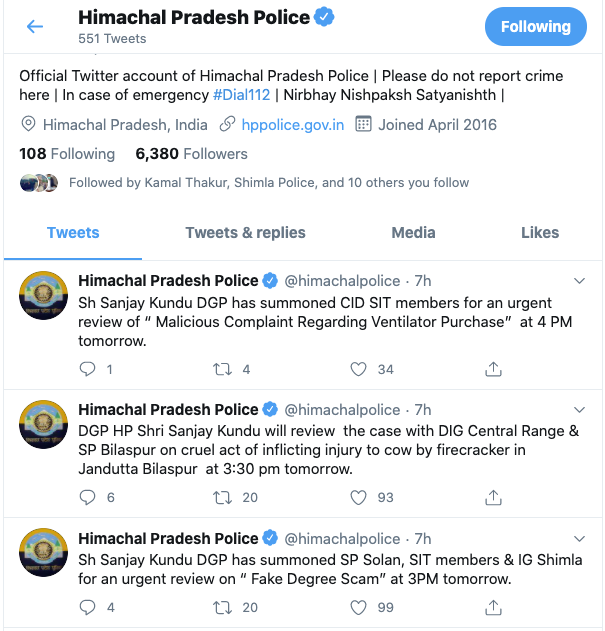 The Fake Degree Scam involves a private university of Himachal which is alleged to have sold hundreds of degrees, some of them even being PhD doctorate degrees.