Dharamshala: Many individuals and institutions have come forward to help the poor in facing food shortages as the COVID-19 pandemic leaves a trail of job losses and business closures scattered around under lock down conditions prevailing.

Tibetans monks residing at the Nechung monastery here pitched in by distributing food rations to about 800 daily wagers and poor people here today. 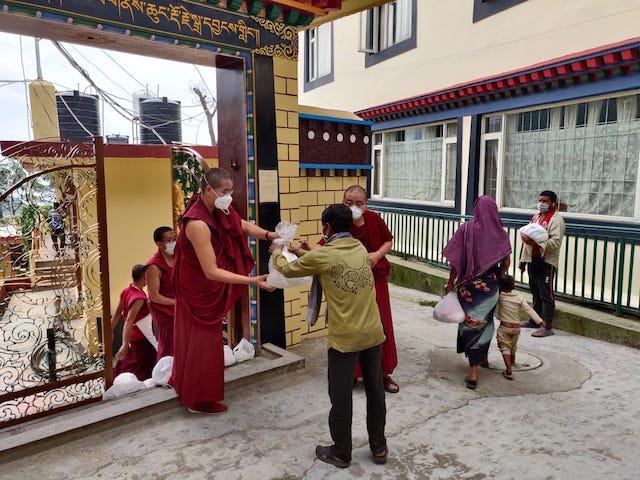 Nechung monastery, also  known as Gangchen Kyishong is nestled just below the Tibetan Library at McLeodganj, Dharamshala. Overlooking the vast expanse of the Kangra valley, the monks living at this monastery have kept alive Tibetan traditions that an earlier generation brought with them when moved into exile with the Dalai Lama in 1959. The small but beautiful with its peaceful atmosphere presents a way of life of the Tibetans.

The monastery was officially inaugurated and consecrated by the 14th Dalai Lama on March 31, 1985. At the monastery there are 93 resident monks, who are headed by Ven. Nechung Kuten Thupten Ngodup and Ven. Nechung Choktrul Rinpoche Tenzin Losel. The monks study various subjects: Buddhist philosophy, psychology, the sutra and tantra texts of Tibetan Buddhism as well as traditional rituals, creation of sand mandalas, English and computer.

The Nechung Monks perform various ceremonies for all living beings in general and particularly for the longevity of H.H.the Dalai Lama and the well being of the Tibetan Government.