Rajgarh Forest Division was unique in the sense that it comprised all sorts of forests – Reserved, Demarcated Protected, Undemarcated Protected as well as Mushtirqua, Shamlat and Private. While the Reserved and Demarcated forests were delineated on the ground with boundary pillars, the other four  types had no boundaries marked on the ground, hence it was extremely difficult to say with surety where the private land ended and forest land began. The Survey of India maps, too, depicted only the Reserved and Demarcated forests, and not the other types. The only record we had of the boundaries were the Revenue maps, the custodians of which were the Patwaris of the Revenue Department. Since the Forest Department field staff had no knowledge of the boundaries of villages, it was quite easy for the unscrupulous timber mafia to surreptitiously fell the trees, and smuggle the valuable timber outside the state. Many a time the crooked timber contractors would obtain written consent of the villagers to sell their trees to them and then obtain the official approval of the Divisional Forest Officer to fell and export them. The only provision was that the revenue officials demarcate the private land in the presence of a forest officer before the trees could be felled!.

Since I had been assigned the task of demarcating the forests of the Division, my boss also gave me the added task of fixing the boundaries of the forests adjoining private land, with the help of whatever records were available – and these were only revenue records, which could be interpreted only by the revenue staff who were the custodians  of the same. The Patwaris carried with them a map traced with black indelible ink on a cloth sheet, which was called a ‘Lattha’. This was traced from the original ‘Musavi’ which was kept under safe custody in the district headquarters. Whenever the Patwari was called upon to identify the boundaries of a piece of land, he would pull out the ‘lattha’ from his bag, identify the land in question from the ‘khasra’ number of the plot, fold the cloth sheet into a small rectangle, and proceed to measure the boundaries of the plot according to the figures written on the map. Needless to say, the figures were often faded, or smudged with dirt or oil stains from the tiffin that was packed side by side with the ‘lattha’! The cloth could also be stretched by the individual, to favour someone, or held loosely to deny a person his rightful land. 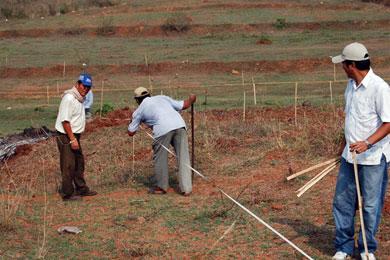 As one can imagine, it was an extremely difficult task with which I had been saddled. For one, all the notations and figures on the so called ‘map’ were written in Urdu, a language that was as foreign to me as Greek and Latin. I understand these have been written in Hindi now – a blessing for field staff, I must say! Outlandish terms such as ‘Jamabandi’, ‘Khasra Girdawri’, ‘Tatima’, ‘Zareeb’, ‘Karam’, ‘Paimana’ further confounded the confusion. To make matters worse, the actual measurement was carried out with the help of a rope (Zareeb) which was knotted at regular intervals to depict smaller measurements. Villagers neither had the knowledge, nor the temerity, to question the work done by the Patwari, so the worthy could literally get away with murder! No wonder there were so many land disputes pending in the Revenue and Civil Courts in those days. I guess the situation is much the same presently too!

There is this story of a boundary dispute arising between the residents of Heaven and Hell, which dragged on for ages because no one could get either party to agree to a compromise. Finally Lord Indra, the ruler of Heaven invoked the Almighty to step in and resolve the dispute. God politely declined, but advised that both parties consult a Patwari who had just landed at the Pearly Gates. On being approached, the Patwari promptly dug into his satchel, pulled out a bedraggled and stained Lattha, folded it up in a bun, and proceed to lay out the the boundaries of the two kingdoms. When he had finished, both parties found that both their territories had diminished. Where had the land gone, they asked the Patwari. “Oh”, said the worthy, “I have taken that as my fee for the adjudication.” Indra and his counterpart beat their foreheads, and went back to their thrones, wondering why they had involved a Patwari in the first place. Such was (and is) the power of the Patwari.

It was into this morass that I was forcibly pushed. The first thing I did was to learn to decipher the Urdu numerals. I sent staff to Malerkotla in Punjab to acquire the brass revenue scales (Paimana), and got copies of the original maps (Musavi) from District Record Room. These were got traced on Tracing Cloth, and then securely kept at the Division headquarters at Rajgarh. Accurate measuring ropes (Zareeb) of nylon fibre were got made, and staff trained in their use. We recruited our own Patwaris and got middle level revenue staff on deputation from the Revenue Department. Whenever I went to the field to demarcate the boundaries of private land adjoining the forests, I made sure to take along a person who could read Urdu, in order to make sure that the ‘Lattha’ we were presented with was indeed the one of that particular village. As most of the Revenue villages in Rajgarh actually comprised of two adjoining estates, this precaution was mandatory. Patwaris would quite often try to present us the map of, say, Katoga habitation when we were actually surveying Ulakh habitation of Village Ulakh-Katoga! The same could happen in Ber-Jamoli, Deothi-Majhgaon, Jadol-Taproli, Dhar-Baghera and a host of others. Another hurdle I had to overcome was the Patwari’s practice of folding the Lattha, thereby hiding almost all the surrounding areas, making it extremely difficult to match the map with the ground reality. I made it a point to get them to lay out the Lattha flat on the ground, with the top pointing  North. Identifying the land holdings suddenly became much easier, as one could now see it in relation to other surrounding physical features like hillocks and streams, as well as man-made features such as temples, mosques etc. These were called ‘Pakka Mauka’ or permanent features, from which to measure the distance to ones holding. It was truly a battle of wits! More often than not, the Revenue staff would hand over their records to me and vanish, leaving me to do the best I could, which was a very good thing indeed.

I am happy to say that within a month of my sincerely taking up the Revenue demarcation work, villagers began requesting me to demarcate the boundaries of their holdings, and even to settle boundary disputes with their neighbours. Needless to say, the timber contractors, for whom I had taken up the task in the first place, soon began to shy away from me and eventually requested my boss to replace me with some other officer. I thank the Lord that, because of this, I escaped being entangled in the wrong demarcations and the consequent clearance of hundreds of hectares of undemarcated forests and forests on village common land, and the scandals and court cases that followed!