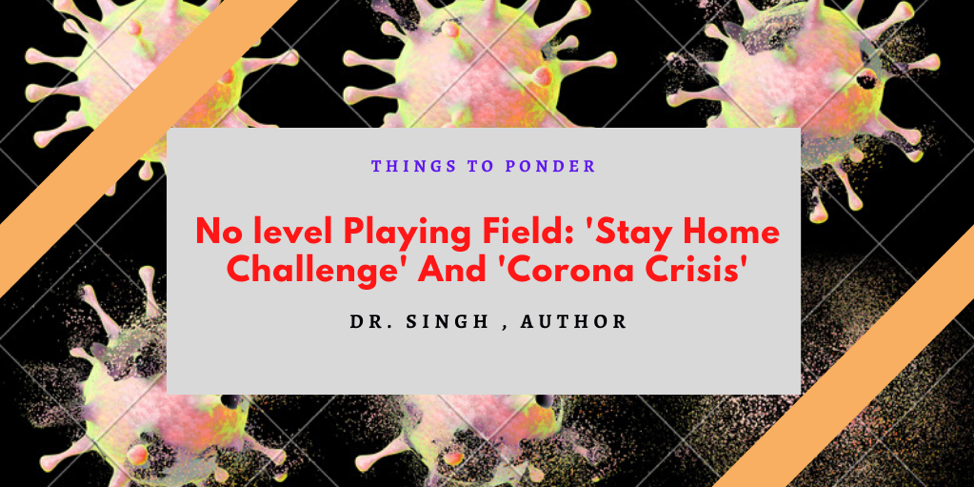 In this article, an attempt has been made to analyze the response mechanism and management of the Corona Pandemic in India.

‘Social Distancing’ and ‘Stay Home’ are being suggested as the most potent ways to contain the spread of the virus.

Are these measures equally practical for the ruler class, middle class and the poor? Do poor might succumb to hunger before actually killed by virus?

The knee-jerk reaction of the Indian Government has resulted in putting the whole nation into a ‘lock-down’. Things started as a ‘Janta curfew’ got quickly transformed into full-blown Marshal Law type of curfew. The presence of a large crowd of daily wagers on major cities bus stops is self-explanatory. Migrant labour got trapped and forced to walk hundreds of miles back home surviving the baton of police.

There is barely any level playing field for ‘Stay Home Challenge’.  There is no equivalency for the amount of hardship faced by rulers, middle class and poor or homeless. For upper class stay home challenge is largely like staying home without going to the pub or club. Middle class stay home challenge is somewhat staying home without going to parks to discuss politics.  But the challenge for the poor is entirely different and insurmountable. Poor have to stay at home hungry.  It is pertinent to elaborate on the definition of hunger to understand the gravity of the problem. Hunger is ‘a feeling of discomfort or weakness caused by lack of food, coupled with the desire to eat’. Additionally, the homeless poor do not qualify for this challenge as they do not have a place to live.

Poor usually live in crowded slums in cities and cramped spaces in villages without having minimum access to water and civic amenities. ‘Same Day Earn-Eat model’ is the business signature of the poor. This model barely keeps them living. Even under normal circumstances the poor and jobless often sleep hungry in free India. Presently, the real ‘Bigg Boss’ is taking place in houses of the poor as they have to stay home hungry. It is also possible that for few elites and middle class this ‘Bigg Boss’ is thrilling. The shutdown of ‘langar’ at ‘Gurudwaras’ has put the poor between the rock and the deep valley.

In the Indian context, the response to the corona crisis by rulers, bureaucrats, media, Bollywood celebrities and corporate ‘sadhus’ is interesting and worth examining. The response of the above five powerful groups will help us understand the direction and orientation of modern India after 70 years of independence.  Reaction encompasses their real actions, hollow speeches and changes in the existing circumstances on the ground towards better or worse.

Rulers of modern India are democrats as they come supposedly elected from the public. The reaction of the government to corona could be described as ‘archaic’. The use of police and force is the prominent response mechanism by rulers to the crisis. If we go back in history we can see the same type of reaction to the crisis as we are witnessing today. It means that the action of rulers is devoid of any strategy and professional approach. No mechanism has been placed to guide the poor through this rough time. The over-personification of government has led the poor clueless and miserable. The reaction of modern democratic rulers is similar to that of kings or invading forces characterized by absence of any compassion.

Bureaucrats are also referred as the permanent government. Interestingly they are regarded as most intelligent or super brains of India. But due to the established permanency of their job profile, they failed to establish any effective intervention to support the poor. Job security has made them so lazy that they no longer innovate to create a support mechanism for such a foreseeable crisis like coronavirus. Blaming politicians is the regular golden excuse for these heavy-footed bureaucrats. They are good at using police force to pressurize people. Bureaucrats fail to create non-police intervention and support mechanism for the poor. Social welfare department and non-police personnel are rarely seen to engage with the poor on the ground. This is the same mechanism that our great freedom fighters attempted to change. But still, we are living in a police state and miles away from the dream of a welfare state.

The role of media has been contracted as a P.R agency. The media is acting on behalf of rulers and bureaucrats. Rarely stories of poor, homeless and hungry appear on prime-time. Religious debates adorn the modern media of India. Media has failed to highlight the heavy burden of being hungry during the ‘Stay home challenge’ for the poor and homeless. Bollywood is another industry full of rich and famous. The number of Bollywood celebrities who retire in Rajya Sabha as non-attending MP’s. In this crisis of pandemic few Bollywood celebrities have gone to the extent that they lashed out on poor and needy for being walking on the road. These celebrities own multiple houses and have loads of money. Most of their big houses are sitting empty. Not a single celebrity has offered to open their few empty mansions to the homeless poor. The anger these people are showing only reflects their shameless response towards a natural calamity that can actually infect them. Sponsoring food and shelter for poor, needy and homeless is a challenge that has negligible takers in the world of celebrities.

Corporate Sadhus or Godmen are very much powerful in modern India. The majority of them are even capable of making and breaking democratic governments. They are so influential that the mainstream media calls them on the debate of ‘Corona Virus’ in place of ‘virologists’ or ‘scientist’. Claims like drinking cow urine and cow dung baths as cure of coronavirus are usually sponsored by this group. Their sphere of action is around selling traditional medicines, yoga and promoting religious identity to be used in the election. These corporate Sadhus control a huge chunk of land and big ‘deras’. But they have also closed their door to poor and are not helping the poor to stay in their sprawling deras. In the time of distress, they are now vehemently supporting science which to they normally disagree. They usually wear clothes as worn by traditional Sadhus. But corporate Sadhus are far away from the original concept of ‘tayag’. Historically, tayag means absolute sacrifice and used to be the hallmark of a ‘Sadhu’. ‘Tayag’ is what ‘Guru Tegh Bahadur’ did for the sake of oppressed and miserable. But these corporate Sadhus have plugged doors of their deras etc. Largely, Godmen are busy guarding their immense wealth without showing negligible signs of help to poor, homeless and miserable. Modern corporate Sadhus are not taking a small fraction of motivation from examples like Guru Tegh Bahadur. Corporate Sadhus are simply misusing ‘saffron’ or ‘green’ colour to amass wealth, money and power.

At last, we can conclude that all these ‘five power centers’ in modern Indian society are not responding in a sane and responsible manner. They are so much absorbed in enjoying the fruits of science and technology that they rarely care to protect the poor in normal or time of foreseeable crisis like a virus infection.

Informed and logical youth is the only solution to the problem of modern India. United and awake youth can bring sanity and accountability among the powerful minority. Encouraging and demanding professionalism is the master key to the solution of modern India. The objective and verifiable approach could address suffering, deprivation, hunger and physical or mental disappointment among the poor and homeless. Stay home challenge could be implemented only by the creation of a level playing field. It involves meticulous and logical planning. Youth should pressurize all five power centers to acknowledge the poor and homeless as equal partners of free India. Youth should ask questions to government, media and corporate Sadhus about the logic behind their actions. Demand should be made to create a verifiable, objective, scientific and comprehensive mechanism to help poor to complete their ‘Stay home Challenge’ without fearing ‘death’ from hunger. Non-police departments like the social welfare department should be assigned more frontline jobs to support the poor and needy. Brutal ways of police should be transformed into actions based on compassion and empathy. Police action should not be seen as a solution to each and every issue and crisis. The present challenge of Coronavirus could be resolved by placing an accountable and responsible professional response rather than ‘police and baton action’ as practiced during medieval times. Let professionalism should prevail in modern India.

As a writer about contemporary issues and new immigrants, Dr Aman Singh holds a doctorate in Sociology from Punjab University.