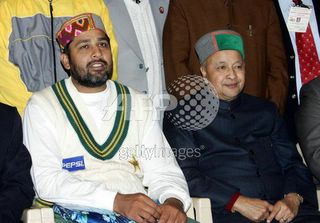 DHARAMSHALA, INDIA: Pakistani cricket captain Inzamam-ul-Haq (L) and Chief Minister of the Indian state of Himachal Pradesh Bir Bhadra Singh pose with others for a group portrait on the final day of a three day match between Pakistan and an Indian Board President’s XI at The Himachal Pradesh Cricket Association (HPCA) Stadium in Dharamshala, 05 March 2005. The match was called off due to bad weather as Pakistan was all out for 273 runs in their firt innings and in reply the Board President’s XI had scored of 120 for the loss of one wicket. Pakistan will play a three Test match and six One-day International match series against India over a two month period starting 08 March, with the first Tes match in Mohali. AFP PHOTO/Prakash SINGH (Photo credit PRAKASH SINGH/AFP/Getty Images)