Dharamshala: Remote region of Chamba district breathed easy on Wednesday after 27 persons screened for spread of coronavirus in the Saho area tested negative. Only yesterday 9 persons who had come into contact with corona positive persons in a village mosque in Una district had tested positive, raising fairs of a community spread in the state.

Vivek Bhatia, deputy commissioner Chamba said to Hill Post, “we have screened an additional 35 people, including close family members, who came into contact with the 4 positive persons of Tissa area of Chamba. Samples collected from them have been sent to Tanda Medical College for testing.” “All the 27 samples collected earlier from Saho area have tested negative, said Bhatia.

The magistrate has enforced strict restrictions about movement of vehicles and people in 29 gram panchayats, which include14 panchayats in Sahu, 8 in Churah and 7 in Salooni sub-division of the district as a preventive measure to ensure public health. He said that supply of food grains and other essential items was being maintained.

The 4 persons from Saho area who had ealier tested COVID-19 positive had a travel history and had attended the Tablighi Jamaat at Delhi. The have been shifted to Mandi Medical College at Ner Chowk and are being.

In Kangra, the magistrate Rakesh Prajapati has widened the corona surveillance net by issuing directions for home quarantine of 15,000 people. “If anyone violates the orders, or we receive any information about defiance of the orders at the administrations toll free number 1077, the administration would be forced to take strict action, said Prajapati.

At the same time he appealed to the people to adhere to the government guidelines and asked the public to report violations of home quarantine orders on the toll free number.

Rising social tensions had Prajapati appeal for maintaining religious harmony. He warned that anyone found spreading rumours that affects religious harmony would be strictly dealt with. “A provision has also been made to take action against those who spread false rumours about Corona on social media and all citizens should avoid posting such fake news on social media,” he said.

The magistrate said that facilities have been created for sanitizing vehicles at the district borders and all toll barrier. Drivers carrying goods into the district were being medically checked.

He said that there was a complete ban on people from other districts and outside the state in force within the district and if anyone was found entering the border, then that person would be kept at established quarter centres at the border itself.

The district administration also did inspect the facilities available at Vivekananda Medical Research Trust in Palampur (VMRT) and are assessing, if needed, whether the institution could be converted into corona hospital.

All the 12 people from Una who have tested positive for the virus are being treated at the Tanda Medical College, Kangra – a COVID designation institution. Of all the 27 persons who tested COVID positive in the state so far, the institution was loaded with 16 of them. Two have been cured and sent home and one patient had died at the hospital.

Sandeep Kumar, district magistrate of Una on Tuesday disclosed that as many as 39 persons who had come into contact with those who attended the Tablighi Jamaat at Nizammunddin, Delhi had been brought under institutional quarantine in the district.

Besides there were another 910 persons  who had been kept in different buffer quarantine centres and 899 persons are under surveillance in home quarantine, said the magistrate.

Harikesh Meena, deputy commissioner Hamirpur disclosed that there were 65 persons in the district had been kept under quarantine for the virus infection.

He said that the administration had decided to issue curfew passes for contract farmers and labourers to harvest crops or for sowing new crops, but they would have to follow social distancing and other precautions that had been specified to contain spread of coronavirus in the state. 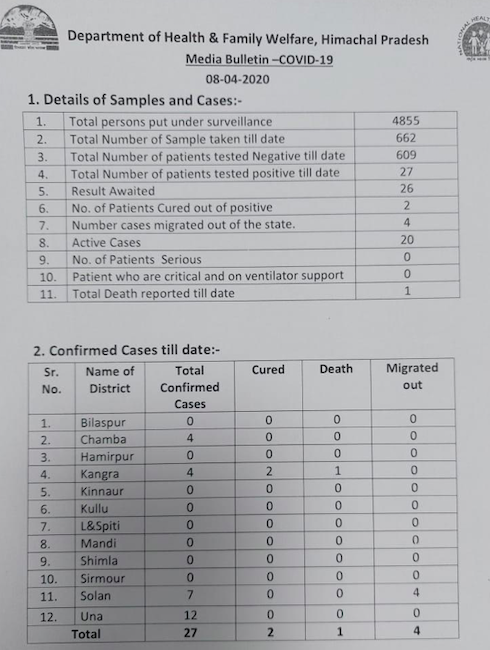