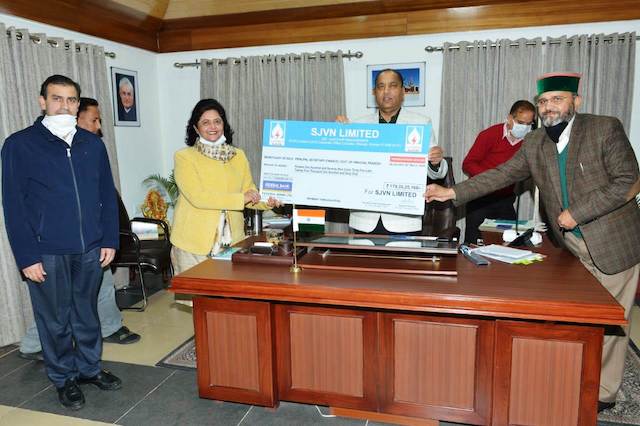 On behalf of SJVN, Geeta Kapur, director and DP Kaushal, chief general manager, presented a bank draft of the dividend amount to the chief minister.

On this occasion, Nand Lal Sharma, Chairman-cum-Managing Director SJVNL said that for the financial year 2019-20 an interim dividend of Rs. 668.07 crores had been declared by the company.

He said that Rs.400.32 crore has been paid to Government of India and Rs. 88.40 crores are being paid to public shareholders as interim dividend. Against a target of generating 9100 million units of energy in 2019-20 SJVN has generated more than 9670 million units.

Sharma informed that till date for an equity investment of Rs 1055.01 crore in SJVN the Himachal Pradesh government has received an accrual dividend payment of Rs 1891.23 Crore.

SJVNL is a Mini-Ratna profit making central public sector undertaking that till date has disbursed a divided of Rs 7356.56 crore and is considered one of the best dividend yield paying companies in the stock market.

Government of Himachal Pradesh retains a 26.85% shareholding in SJVN, the central government has a controlling stake of 59.92% shares and 13.23% shares rest with the public.