Manali: Two young men while travelling by a car on one of the highest motorable roads in the world, near Hikkim village of Spiti, were utterly shocked at spotting two snow leopards that did not shy away, but instead one of them approached the vehicle to have a close encounter with the human world. 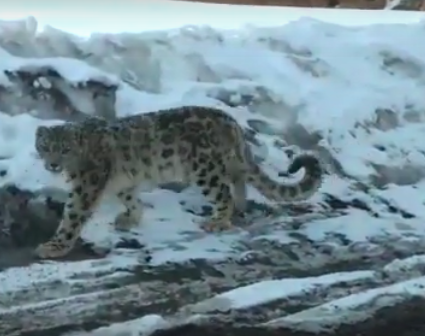 Nawang of Kaumik village and Sushil Yangthangi of Lahaul were returning to Kaza from Kaumik when in the evening at about 5.30 p.m. they saw the rare animals near Hikkim village, about 20 Kms from Kaza.

At first they thought that the animals would run away on seeing the vehicle but one them cautiously began to approach the car. The two young men were even lucky to capture the encounter on their mobile phone video to treasure it as a precious memory.

The video clip has attracted a lot of attention on Twitter and other social media platforms as it is being claimed as one of the closest encounters that snow leopards have ever had with humans in the wild.

Snow leopard is one of the most beautiful and mystical big cat with grey/green eyes, unlike the yellow eyes of other big cats. Tail as long as the body and 5 inch fur at bottom to survive cold weather, rare to see these ghost of the mountain.

Snow leopards are one of the world’s rarest, most elusive and little studied large animals. They are generally very shy and well camouflaged, and hardly ever seen. Most encounters involve villagers looking for firewood or herding animals. The first photograph of one in the wild was taken in 1970 by the legendary zoologist George Schaller. Snow leopards prefer crags and ridges in steppe, rocky shrubs and open conifer forests at altitudes at around 3,500 (11,480 feet) to 5,000 meters (16,500 feet) but have been observed in mountains over 6000 meters (19,700 feet). In the winter they descend to lower elevations.

Snow leopards have short, powerful forelimbs and strong chest muscles that are ideal for climbing and making quick dashes through rugged terrain. They have wide, fur-cushioned paws that allow them to get firm grips or rocks on cliffs and steep slopes and act like snowshoes on soft snow and allow them to move easily and silently over the snow. Long, muscular hind legs enable snow leopards to leap seven times their own body length An unusually long, broad tail serves as both a balance pole for leaping and a wrap-around face muff for sleeping.

Snow leopards are always on the move. They sleep in different spots nearly every night and are most active in the early morning, late afternoon and evening, when the changing light makes them particularly hard to see. They prefer steep terrain and cliffs that they can use to spot prey.