A poison can only be combated one way- by the infected body producing its own antibodies to counter the venom. The struggle is painful and not easy and at times appears futile, but there comes a tipping point: the venom peaks, the fever breaks, and the body expels the poison. I would like to believe that this is what has happened to India, the tipping point being the Delhi elections which the AAP has won handsomely.

This is no run- of- the- mill victory; not since the BJP has come to power at the center in 2014 has an opposition party returned to power, bucking anti- incumbency and with a two thirds majority, in back to back elections. Kejriwal had to contend with an absolutely unprecedented level of hatred, official violence, personal abuse, misuse of police machinery, communalism and naked lies that were unleashed by the BJP. Never was so much fire power brought to bear on 1400 sq. kms of territory: the entire union cabinet, 200 MPs, 7 Chief Ministers, 46 rallies by the Home Minister himself, even the Prime Minister. The largest political party in the world, backed by an unlimited war chest of electoral bonds, against a relative minnow only seven years old has been humbled. This is a bigger victory than in Madhya Pradesh, Rajasthan and Jharkhand for many reasons.

AAP fought this election alone, whereas even the BJP had to fight with three partners, as had the Congress too in the other states it won. The margin of victory is staggering, for the second time running. This was the first election post the Article 370 and CAA/ NRC “master strokes” of the BJP and was supposed to have been an endorsement of these draconian measures. The hubris of the BJP was matched by the somnolence of the Congress which, by not having an understanding with the AAP, practically gifted almost half its vote share to the BJP, notwithstanding which the AAP retained its own vote share to win. The AAP had to fight a lonely battle, vindicating Tagore’s exhortation of   “ekla cholo re”. It would be educative to focus on a few points of interest that indicate that the anaconda’s coils may be loosening. 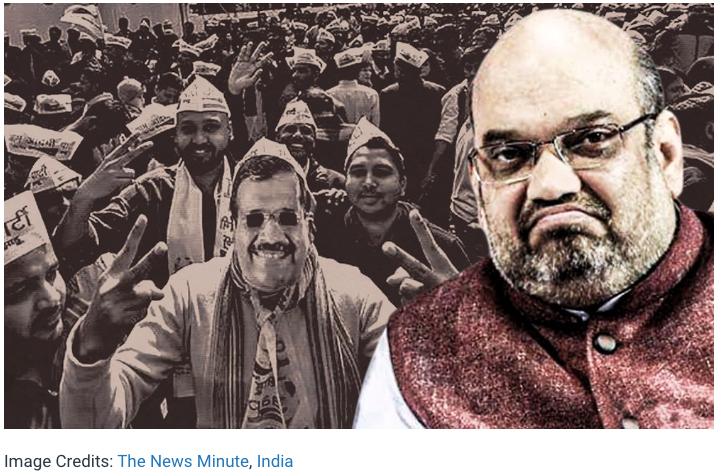 The results unequivocally confirm that the BJP’s hate speeches, abuse, shameless polarisation and incitement to violence did not work. AAP’s vote share of 54% establishes that Hindus in large numbers voted for the party. The clearest( and most shocking for the BJP) indicator was the voting pattern in Okhla, where Shaheen Bagh- that alleged hub of terrorism and “mini-Pakistan”- is located. Okhla has a population of 300,000 of which 40% are minorities. A total of 136000 votes were cast of which Amanatullah Khan of AAP got 109017 votes and his BJP rival Braham Singh received 20520. Even if we assume that 80% of the Muslims voted ( a staggeringly high and unlikely figure), and that all of them voted for Amanatullah Khan, their votes do not add up to more than about 90000 votes. Which means that about 20000 Hindus also voted for him- the same number as for Braham Singh. This is the most favorable calculation for the BJP- in all probability the number of Hindus who voted for Khan is probably double this number. The same pattern is visible across all the seven or eight Muslim dominated seats. Quite clearly, the attempted polarisation did not work, and the Home Minister admitted as much on 13th Feb when he rued the use of extreme and hate filled language by the BJP campaigners. He should, of course, include himself in that black list.

Of equal concern for the BJP, and hope for India, is that the BJP’s vote share was significantly lower than AAP’s across all 7 Parliamentary constituencies- it did not prevail among any cross section of society, whether by cast, profession, region, religion, income or sex, showing that the disenchantment with its arrogance and vitriol is widespread. It should worry in particular that even in New Delhi and Central Delhi it failed to win even one seat; New Delhi, especially, because 80% of its voters are govt. servants and their families – if they too are estranged it does not say much for Mr. Modi and his cabinet. Not only are they losing the states, they are also losing the civil servants.

The (still supine) media is obligingly peddling the BJP line that the party lost because of Kejriwal’s “freebies”, a lackluster local party cadre, failure to project a CM face; and that the trouncing is not a reflection on either the BJP’s insensitive policies or on the Modi-Shah duo. Nothing could be further from the truth. While the first three reasons are valid, there can be no doubt that this is a loss personally for, and on account of, Messers Modi and Shah. Their intransigence, arrogance, lack of any compassion, contempt for the rule of law, refusal to engage in any discussion, abuse of the state’s powers- as reflected in the CAA, NRC, NPR, Kashmir- have substantially eroded the people’s trust in them. This was evident in the Jharkhand results and has now been ratified in Delhi. The people are increasingly uneasy and worried about the ever increasing doses of poison being injected into our system. This politics of majoritarianism and confrontation has gone too far and for too long, and the average Indian- of all religions and denominations- is beginning to push back against it. They want a synthesizer, not a divider, and Kejriwal’s genius lies in having realised this. He has sought to bridge the binaries which have dominated all politics till now, more so since 2014. He will, therefore, encourage business while budgeting big for welfare of the poor, call himself a ” son of Delhi” while making life easier for the migrants in the slums, oppose CAA and NRC while supporting the withdrawal of Article 370, refuse to go to Shaheen Bagh even as his Deputy Chief Minister says his party stands with the protesters, recite the Hanuman Chalisa but not the remix of Jai Shri Ram, proudly proclaim his personal religion while refusing to impose it on others and make it state policy.

The BJP/RSS fighting machine needs an enemy and a target to exist- Kejriwal refuses to be either. He is a will o’ the wisp who cannot be pinned down, he will not allow himself to be stereotyped or poured into a mould of the BJP’s making- anti national, anti Hindu, liberal, urban Naxal, pro-Pakistani and so on. Without these labels, the BJP finds it hard to target him, let alone vanquish him. Kejriwal may just have found the perfect antidote to the BJP in this traditionally syncretic nation- be a leader for all seasons and reasons, not just for the winter of discontent. There is much in this formula for other parties to emulate, if only they could jettison their personal egos and ambitions.