Love can blossom in the in the most unusual places and in the most bizarre ways. It was Bhopal – the city of lakes – which scripted the story of love between two Indian Army aspirants. It was the first time I felt something different. I saw him dragging his suitcase on the railway platform. Drenched in sweat and completely parched, he was hassled by the heat of the plains. This man from the Himalayas (pahari) took my breath away! I had never looked at somebody like this ever. He stood there under a tree and I kept turning and looking at him every two minutes. What was this feeling? I had an overnight journey from Ahmedabad to Bhopal, and this fourth attempt at SSB had to be my last; it was decided.

No, none of us got recommended but the five days we stayed there, life recommended us to each other. My eyes were all up for this man whose name I didn’t know. He was Chest no. 19 for me (the number given by the SSB). While I kept chasing Chest no. 19 all the time, he was absolutely oblivious of my presence. We did not exchange words, we did not exchange numbers. But we had exchanged glances at the railway station while waiting for our return trains. Little did we know, these glances meant something, but what? The longing of not seeing him again ever ripped my heart. And, we returned to our respective homes. 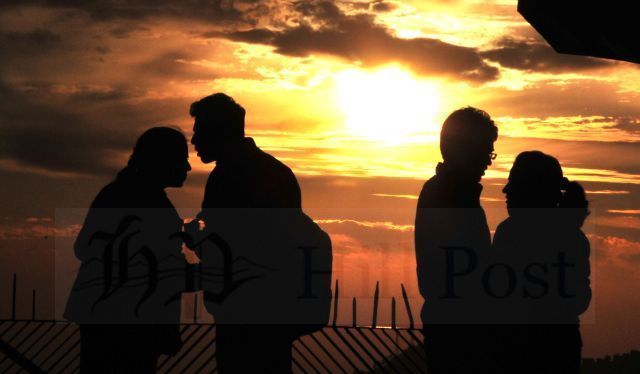 As destiny would have it, Facebook became our meeting place. We met, we exchanged numbers, and we started talking. He sang songs to me while I read him my poetry. We poured our heart out to each other, to a stranger. Everybody thought we are mad. Exactly, a week later, flash floods struck Uttarakhand. I woke up and saw the horrific visuals on news. I was scared to death but I kept calling him. He called me back after four hours! He was safe but before cutting the line, he said, “Love you so much”.

We didn’t speak for the next two days. I fell sick and stopped taking calls. This time, he got scared that he had said something wrong. The third day when we were finally able to speak, he said, “I don’t want an answer.” And he sang “Tum ho” from the movie Rockstar to me. This time, I blurted, “I love you too.”

This was the beginning of love between two people who knew nothing about each other except their names and cities. We made a commitment but had we fallen in love yet? What followed is a story of our struggles, our battle of six long years before we finally tied the knot last year. We fought distance, we fought caste issues, we fought with our respective families and in the process, we fought with each other. But, we remained. Was this love at first sight? Maybe. Or maybe, we fell in love afterwards because we wanted to.

Vandana Yadav is an engineer turned journalist who works at the intersection of content and branding for entrepreneurs and large institutions. A thoughtful writer, an ever ready traveller, she is a poet and a shayara at heart.