For the last six months a small section of the 130 crore Indian society was itching to initiate nationwide protests against the government at the centre. Politicians from the opposition, misguided liberals and a few Muslim community leaders, who form this lobby, appeared to be a worried lot. Try as they may, the Modi juggernaut seemed to be having a free run. The frustration was writ large on their faces whenever they were seen on national television or elsewhere. They appeared to be powerless as the government went about its job of introducing some long pending important legislations successfully one after the other.

It started with Triple Talaaq, then came the bombshell of abrogation of Articles 370 and 35A in erstwhile state of Jammu & Kashmir. Before they could recover, the BJP led government came trumps on the Ayodhya issue with Supreme Court ruling in favour of building a Ram Mandir on the disputed site. To their credit majority of Muslims accepted the verdict gracefully. Perhaps it was always clear that Muslim community as a whole had little interest in Ayodhya dispute as it neither impacted their religion nor any of them individually in any manner. The hype around the issue was only creation of some selfish community and religious leaders who wanted to exploit it to further their dubious leadership credentials.

The expected Muslim back lash, after these three events, was nowhere in sight. This really set the cat among the pigeons as far as anti-government lobby was concerned. Most opposition leaders were worried that BJP and its allies would reap a lot of political mileage from all that had happened. No amount of political rhetoric, which ranged from base to crass, seemed to be working for opposition and their sympathisers. They were itching to crate hurdles and difficulties for the government but Indians thought otherwise and all efforts of the lobby came to a nought. Then came the fourth bombshell of Citizenship Amendment Bill (CAA) passed by the parliament on 11 December 2019.

On the face of it CAA was perhaps the least controversial issue in the list. But as events unfolded in its aftermath, it has become the most controversial one. The main reasons for this are lack of understanding by citizens and success of the lobby in pushing it as an anti-Muslim bill. The lobby saw an opportunity to fan communal divide that could give them the much awaited platform for nationwide protests. Many among Muslim community were itching for a fight after their perceived humiliation and fears relating to Triple Talaaq Bill, changed status of J&K and Ayodhya judgement. Opposition’s strategy of starting with peaceful protests by students from Muslim dominated universities paid huge dividends. Starting from Jamia Milia Islamia in Delhi, the protests spread to other campuses within days. Using students as a front, the opposition successfully infiltrated these protests and ensured that they turned violent. Local politicians, some student leaders and social activists ensured that passions ran high by delivering high decibel speeches laced with perceived fears of CAA being anti-Muslim in more ways than one. It is important to note here that a lot of young people, who are not Muslims, too have joined the protests as equality in word and spirit is genuinely important for them. Finally, after a long period of frustration the lobby had found an issue to ride. The fears over NRC (National Register of Citizens) too being anti-Muslim added to the imbroglio. 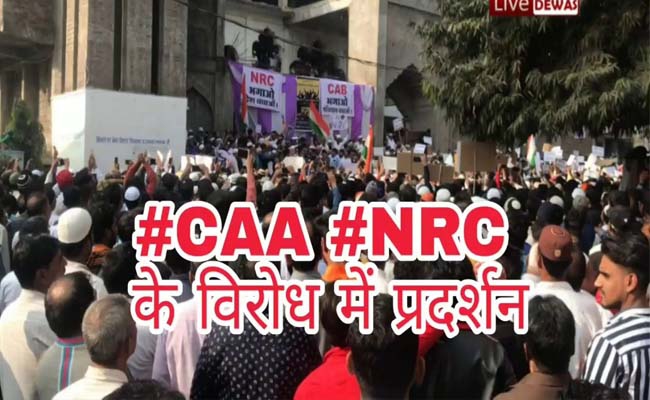 Over the last two weeks the government itself has made matters worse by confusing the public further through its statements on CAA, NRC and now NPR (National Population Register). Despite its honourable intentions the government is on back foot today because of its muddled position on this issue. The lobby has used this confusion caused by the government to its advantage by making the issue more perplexing for the common man. Government’s stand that be it CAA or NRC or NPR, all were the brain child of previous Congress led governments supported by the likes of Mamta Banerjee has not cut any ice with the public. In any case it is time BJP leadership realises that today the onus for ensuring understanding and acceptance of the issue lies with them. If they try to pass the buck it will only result in loss of their credibility.

Maharashtra election results and formation of non-BJP government in the state has reaffirmed opposition’s faith in the need for forging alliances at all cost in every state to beat BJP. Jharkhand has gone the same way and despite being the largest party, BJP will have to sit in the opposition. Despite putting up a brave face BJP’s leadership must be a worried lot today. Emboldened by the protests, many Chief Ministers have openly stated that they will not implement CAA or NRC or NPR in their states. The legality or correctness of their statements is irrelevant here but the fact that such stand by states adds fuel to the raging protest fires cannot be overlooked These political developments have a lot to do with intensity of the protests and the new found confidence within opposition ranks.

In hindsight it is obvious that CAA and NRC are just excuses. The real reason for the protests is the pent up frustration of part of the Muslim community because of their perceived fears of marginalisation and Hindu domination. One can argue, and perhaps rightly too, that all this is far from true and is baseless. However it will not surprise anyone if an average Muslim, even if he is not involved in the protests directly, does harbour such fears with varying degrees of conviction. The anti-government lobby will leave no stone unturned to further this false narrative to increase Muslim apprehensions. In fact given their pathetic run in last five years they have nothing to lose by doing so.  Nation or what is good for the nation is farthest from their minds today. All that matters to them is how to stay relevant politically or otherwise.

Given the above environment, the responsibility for normalising the situation and confidence building has to rest with the government. Is appeasement, as practiced for nearly seven decades in the past, an answer? Perhaps not as it will be a very regressive approach. In fact the current environment is partly a legacy of the appeasement policies of yesteryears. So what can the government do in this regard to normalise the situation. First, and that is perhaps not negotiable, is the fact that violence must be unacceptable and dealt with a heavy hand. Those responsible for such violence and damage to public or private property must be held accountable and dealt with in quick time. Political leaders, including those from the ruling party, and those from the social elite who masquerade as activists, responsible for inciting or spreading half-truths must be dealt with expeditiously. Last but not the least, government must institute measures to prevent spread of fake news in media of all kinds.

Since protests started from students, it may be prudent to educate them to defeat fake narratives on CAA or NRC. University authorities must play an important part in this apart from well-meaning intellectuals and responsible citizens. Politicians and student unions should be kept out of such events as politicisation must be avoided at all costs. Government could consider issuing a gazette notification giving assurance to all citizens, irrespective of religion, regarding safety of their citizenship status. Any exceptions in this regard must be stated clearly and must be specific to avoid any ambiguity. Once that is done it may be prudent for government to prepare a NRC or NPR, whatever one may call it, based on the vast data already held with authorities in the form of Aadhar and Voter Cards since these are the most widely issued documents in the country. Where required these can be linked to PAN, driving licence, passports and property deeds by authorities themselves. Once that is done the authorities would only need to reconfirm existence of that individual instead of asking him to prove his identity from scratch. This could easily be done as part of next census exercise in 2021. Only exceptions should be required to prove their identity from scratch which will be a much smaller and manageable exercise. Hopefully these steps may allay a lot of unfounded fears that abound in many citizens today.