Manali: Himachal Chief Minister Jairam Thakur along with other leaders yesterday paid rich tributes to former prime minister Atal Bihari Vajpayee on his 95th birth anniversary. Forest and Transport Minister Govind Singh Thakur and Urban Development Minister Smt. Sarveen  Choudhary were among those who placed flowers as a mark of tribute at residence of Late Atal Bihari Vajpayee at Prini village in Manali this morning here.

Also the citizens of Manali give their tribute to former prime minister Atal Bihari Vajpayee, who is in their hearts, on his birth anniversary.

CM Jairam praised Vajpayee, who ruled the country for 13 days in 1996, 13 months in 1998 and for five years from 1999. But that year, his government lost a no-confidence motion by one vote

Chief Minister formally launched ‘Ek Buta Beti Ke Naam’, from the premises of Atal Bihari Vajpayee’s house at Prini. Under this scheme five tree saplings would be presented to the families of newly born girl child along with other kit. He presented five deodar saplings to the mothers of newly born girl child, besides twenty kilograms vermicompost, five tree guards and name plate of the girl child to the family members.

Jai Ram Thakur said that Shri Atal Bihari Vajpayee was a multi-faceted personality and apart from being a great Statesman, he was an outstanding orator, a passionate poet and a committed journalist. He said that he always showed special benevolence on Himachal Pradesh and its people. He said that Vajpayee showered his love and affection by giving approval to various mega projects for Himachal Pradesh. He said that statues of Atal Bihari Vajpayee would be installed at Mountaineering Institute Manali, Atal Sadan Kullu and at The Ridge Shimla. 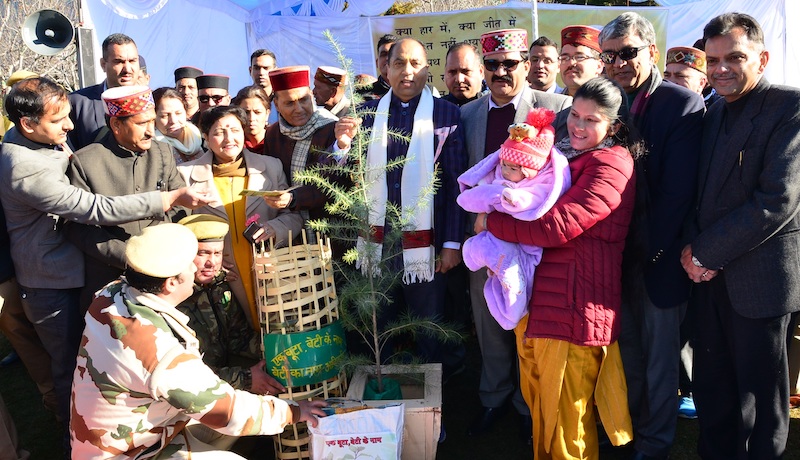 Chief Minister also released a book on Atal Bihari Vajpayee brought out by the State Language, Art and Culture Department which has been edited by Dr. Inder Singh Thakur. He also released the logo of ‘Ek Buta Beti Ke Naam’ on the occasion.

Transport and Forest Minister Govind Thakur said that Atal Bihari Vajpayee had special love towards the State in general and Manali in particular. He said ‘Ek Buta Beti Ke Naam’ would go a long way in increasing the green cover of the State as every family with the newly born girl child would be provided five tree saplings.

Vajpayee was known for his oratory skills, which was on display when he defended the nuclear tests in Pokhran in 1998. Jairam said”It is surprising that people are criticising the nuclear tests. When in 1974 then Prime Minister Indira Gandhi had carried out the tests, he welcomed it even while he was in the opposition.

Poetry was his most preferred expression and delivered his message effectively in a few well-chosen words.

Vajpayee was born on December 25, 1924, to Krishna Devi and Krishna Bihari Vajpayee, who was a poet and schoolmaster. He joined the Rashtriya Swayamsevak Sangh, the BJP’s ideological mentor, in 1939.

In 1942, he and his brother were arrested during the Quit India movement. In 1951, he was asked by RSS to work for the newly former Bharatiya Jana Sangh, the predecessor of the BJP.