New Delhi: PHD Chamber of Commerce & Industry (PHDCCI), a 115 year old organization, with more than 1,30,000 direct and indirect members all over India yesterday appointed Rakesh Wazir, the President Hotel & Restaurant Association, Katra,  as its Chairman for Jammu region. His appointment was conferred by D.K.Aggarwal, national president PHDCCI. at a simple but impressive function here.

Speaking on the occasion Mr Aggarwal said that the Chamber acts as a catalyst in the promotion of industry, trade and entrepreneurship through its research-based policy advocacy role which positively impacts the economic growth and development of the nation and is more than an organisation of the business community, as it lives by the chosen motto ‘In Community’s Life & Part of It.’ It also contributes significantly to socio-economic development and capacity building in several fields. 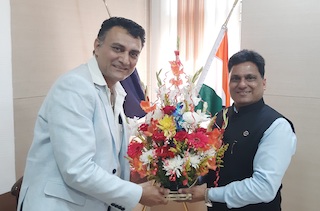 He said that with the coming of Mr.Wazir as its Chairman for Jammu region and with his vast experience of the industry in his different capacities including Advisor India Tourism Development Corporation,President Hotel & Restaurant Association,Katra,Member Tourism Advisory Board J&K government etc.the chamber will strengthen further in Jammu region and in the coming days the chamber will have a strong presence right from Banihal to Lakahnpur in one direction and from Doda & Kishtwar to Poonch in other and particularly in each and every district and major town of this region. He said that the focus will be on specialised opinions to the government and other bodies through this body and through the expert committees of the Chamber to be formed by him in near future.

Mr.Wazir while speaking on the occasion thanked the president and whole PHDCCI team for bestowing this responsibility on him and said that he is feeling honoured in getting associated with this 115 year old organization which has a long history and has contributed a lot in the nation building and every effort would be made to strengthen this organization further particularly in Jammu region and to act as real pressure group and a bridge between Industry, people and business community on one hand and the governments either state, Union Territory after 31st Oct. or centre on the other and will act vigorously for the development of the state/union territory and will project the genuine matters at the genuine level. He said that in the coming days in consultation with Central body at Delhi the rest of the body ,expert committees and presidents/conveners of all major districts & towns of Jammu region will be announced.

Mr Rakesh Wazir is also a Member Tourism Advisory Board of the J&K government.