A recent spurt in resignations by some IAS officers is attracting media and political attention. A BJP leader has advised these officers to go to Pakistan, which is the normal reaction from this party to anyone who dares to differ. Of graver import is an interview by Jawhar Sircar to Newsclick on the 23rd of last month. Mr. Sarkar, who has served as Secretary, Culture and the Chairman of Prasar Bharti till he hung up his well worn boots in 2016, is among the very few articulate and erudite retired officers from this service who have the courage to speak up, and is well worth listening to. He sees in these resignations a shadow of hope, a pushback from the IAS against the increasing dictatorial tendencies of the present Union Government. He expects more resignations to follow as officers are forced to choose between the Constitution and the unlawful proclivities of a vindictive government that will brook no alternative view. How correct is his assessment?

Before we do so, however, it will be useful to recall the context of this debate. So far five IAS officers have resigned: Subhash Garg (Gujarat), Shah Faesal (J+K), Shashikanth Senthil  (Karnataka), Kannan Gopinath (Kerala), Kashish Mittal (AGMUT). They are not all conscientious objectors, however. Mr. Garg was the all powerful Finance Secretary – the demonetisation man- and had no option but to quit when he got his come-uppance for proposing a sovereign, foreign loan in the Budget. Mr. Mittal too was not driven by any ideals: unwilling to give up a cushy assignment in Delhi, he put in his papers when he was transferred to the dreaded north-east. We need not shed any tears for this duo. But the other three- all youngsters with barely fifteen years of service between them- are perhaps the gentlemen Mr. Jawhar Sircar speaks of, officers who still retained in large measure the ideals, values and professionalism with which they had joined service. All three have left no doubt whatsoever as to why they quit: undemocratic functioning of the union government, denial of basic freedoms, trampling of human rights.

There is also a second context: the manner in which the BJP government is systematically dismantling the civil and central services in order to recast them in its own image. All other services have already gone belly up, as have the so called autonomous institutions- CAG, RBI, ECI, CBI, SSC, Revenue, ED and the dozens of others; the judiciary too is well on its way down this slippery slope. The IAS needs a little bit more effort to be brought to heel, partly because it functions under a dual control- the centre and the state- and the former cannot claim exclusive rights over it, and partly because its members are descended form the ICS and can still recall a Seshan, a Noronha, an NC Saxena or a Butch, and some still try to live up to this pedigree. 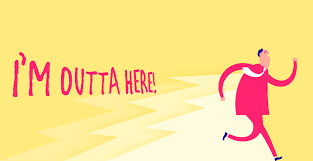 The political onslaught is from all sides: rules have been/are being amended to change the system of assessment and allotment of services and cadres; lateral inductions being made to ensure the loyalty of such appointees to only one party, even UPSC question papers are being realigned to project the BJP’s ideology. (HW channel recently revealed one such question in a paper, it goes like this- “What are the challenges to our cultural practices in the name of secularism?” The message to prospective examinees is clear: start thinking like the BJP if you want to do well in the competition.) Crucial appointments are being made by-passing existing codes, as in the appointment of the Chairman, Staff Selection Commission.” Inconvenient” persons are being eased out, pliable collaborators rewarded with sinecures. Read my lips or you  will be treated like the Lavasa family, is the not so muted message. The centre’s  “cadre controlling authority” powers are being exercised to override, in many cases, a state government’s control. The CBI is always lurking in the wings when push comes to shove.

In this suffocating, and worse, context three young officers decided to quit rather than become willing collaborators. But is it the beginning of a trend, as Mr. Jawhar Sircar feels, or is it just a lonely cry in the wilderness? On this I’m afraid I have to disagree with my batchmate.

The IAS is no longer the service it was even twenty years ago. It has been hollowed out from within by the wrong kind of inductees- the KOTA type of engineering, medical and management graduates who are decidedly intelligent but lack a broader vision of history, of liberal traditions, humanism and social empathy. They are driven by algorithms and not by the values of a Gandhi or a John Stuart Mill, by the hardware of material aspirations, not the software of a troublesome conscience. It is not their fault, they are products of an uncaring, amoral if not immoral society. They are the products of an educational system that prioritises material success and power as the new religion and the Apex scale as the new deity: there is no other meaning to life. Their belief in the utilitarian principles of today is total; they have no self-doubts, they exemplify what Mills called ” the completeness of limited men.”

Perhaps because of their training in the dog eats dog IIT type of exam system, they are competitive to a fault which is why there is no esprit de corps left in the IAS – it is every man and woman for him/herself and the CBI take the hindmost. There is no rallying around when one of its members is subjected to unfair persecution – like a herd of wildebeest, they stand around observing the massacre till it’s the turn of one of them to be on the menu. The IAS Associations can do little to protest, they are mere choir boys who can just about organise a farewell party when pushed to their outer limit. This suits the government of the day just fine. Politics and politicians have made deep inroads into the vitals of the service by holding out the promise of lucrative postings and post retirement sinecures, balanced with the threat of a departmental inquiry or FIR. There was a time when the senior officers mentored the junior ones, and trained them in the sterling ethos of the service. No longer, for the honour of serving the nation has now been replaced with naked ambition and self aggrandisement. They are now taught how to survive, not how to serve. They are like frogs in that famous experiment: comfortable in their slowly heating cocooned saunas, making no attempt to get out while they can, till it reaches boiling point and then it’s too late.

Don’t get me wrong. There still are plenty of fine officers, but they are a silent minority and today its all about majoritarianism. And the IAS alone should not be singled out for blame either. Even the heavily insulated defense services have caved in and can no longer distinguish between the legitimate civilian  control of the armed forces and the wholly unconstitutional political control. They too have fallen in line like a platoon on the parade ground. The IAS has not yet become the Praetorian Guard, but it will soon. I do not see many more Senthils or Aruna Roys who stand by their convictions. It’s more comfortable, and less dangerous, to have the courage of others’ convictions- especially that of your political bosses. One swallow does not a summer make, but it does make one wonder- where have all the other swallows gone?