Those of my readers who still follow the gibberish I churn out every week will be glad to know that I am haemodynamically stable. Gotcha! You don’t know what it means, do you? Neither did I nor does Google which insists on putting a red line below it. Actually, one has to be a retired (also known as retreaded for those with stents, knee replacements and penile implants) fogey to decipher such neologisms: only such a person has the time to sift through the mega tonnes of garbage being voided in print and other media, and find the occasional gem like this one. Unless, of course, you are a follower of Mr. Shashi Tharoor, in which case you will encounter such words more frequently than the UP police stumble upon criminals in encounters. Unlike the latter, however, you will not die but merely be elevated.
Reverting to this seven syllable word, however, it means that your heart is functioning normally, and I found it recently in an AIIMS bulletin about a VIP. Doctors do this, you know- when they use such words you can be assured that they don’t know whether the patient is coming or going, literally. It’s time to reach for the ventilator if not the family priest. But I don’t mind because I intend to leave behind a Living Will with explicit instructions to my direct descendants to pull the plug on me the moment a doctor uses a word that has more than four syllables or mumbles a four letter one. Till then, however, I continue to rummage through this beautiful, linguistic trough like a pig nosing around for truffles.
I am a trenchant critic of our present political dispensation but must admit that, quite against their wishes or intentions, they have enriched and enlarged our vocabulary. If it were not for their retrofitting of past events, for instance, how would we have known that they are committing “historicide”? An utterly stunning word, invented by the literary critic George Steiner, which means destruction of historical-factual reality. Examples: making the Nehru- Gandhi duo culpable of all the evils in this country, maintaining that Maharana Pratap had won the battle of Haldighati, insisting that Aryans were the original natives of the sub-continent but Sunny Leone is not! Have you noticed how this word elevates the political discourse?- instead of saying they are  talking s–t or lying the Congress can now politely accuse them of historicide. And by the time they figure this out with the help of their resident history expert, Mr. Bhupendra Choubey of CNN-TV18, the Opposition would have stitched up another alliance. Or, as another wonderful phrase has it, ” nipped their plans in the butt!”
These wonderful discoveries are not limited to just words, but also embrace theories and concepts. Did you, for example, know that there is an ” underwear index” of recession to assess the health of an economy? It was created by the former Chairman of the US Federal Reserve Alan Greenspan: it assumes that when the sales of men’s underwear falls the economy is in decline. Now, we had heard of the Nudge, Fudge and Shove theories but this is a new one. It may explain why there are so many “briefless” lawyers these days, but also raises some questions. Why has the Indian male stopped wearing underwears? Is he switching over to the “langot” or thong of the Patanjali variety, or is this part of the freedom of New India? Will it lead to a spike in sexual molestation cases, what with millions of Indian males now going around with ungirded loins? Is this theory by itself adequate to explain a drooping economy- should it not be supplemented with a Viagra Index or a Condom Index ? Because if the latter two indexes are rising while the underwears are falling then Mr. Greenspan has a problem with his concept. 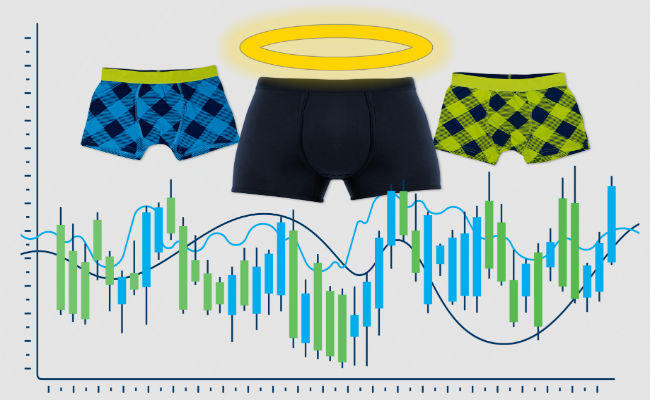 And why is this theory limited to men’s underwear? Why not have a panties index too? Because if the panties too are falling then this may result either in over exposure  or in a stirring of the famed animal spirits, which, economists and our current Chief Economic Advisor inform us, is good for the economy. I don’t know whether falling panties indicate a panting bull or a sulking bear, but the two indexes appear to contradict each other- one shows a limp and wilting economy in need of some stimulation, the other promises a rising one, ready to mount the commanding heights. No sir, Mr. Greenspan, it’s back to the drawing board (or draw strings or G strings) for you to reconcile these contradictions.
Here is some more stimulus. Did you know that we all have two types of intelligence? “Fluid intelligence” is what you possess before the age of 50 years; it is creative, inventive, innovative and characterises entrepreneurs, inventors and ideators. The second type is ” crystallised intelligence” possessed by those above 50 years: assimilated knowledge of history and archival data which is typically found in historians and researchers. This explains a lot about the trajectory of our lives, why practically all start-ups have been founded by people below 35, why we grow more conservative and risk-averse in later life. But in today’s India it doesn’t really matter what type of intelligence you have. In the first category, if you are a successful entrepreneur you will be hounded by the Income Tax chaps, and if you are a failed one then the CBI and ED will have you by the short and curly in no time at all. Similarly, if you belong to the crystallised category and are loyal to history you will be branded a libtard or leftist or anti-national. The only intelligence which matters today is the ossified form: stop thinking and follow the martial music of the jackboots. If you are still wondering what this is, just tune in to any TV channel today evening.
And now there is another danger confronting those with any form of intelligence: you may be locked up without any bail. On Thursday, while opposing bail to Mr. Chidambram, our Addl. Solicitor General argued thus: ” He has tremendous potential for not cooperating in the probe since he is highly intelligent.” Shorn of legalese it means intelligent people should be denied bail. The judge agreed and sent Mr. Chidamaram to the cooler for five days. It’s best to be a moron these days and have it as a default option. But it’s good to know that once upon a time there was such a thing as human intelligence, of whatever type.
Finally, there is no better place to conclude my neologistic travels than my home town, Kanpur. Its spirited citizens are no respecters of either the Queen or her English and do a section 376 IPC to it on a daily basis. On my last visit there I noticed a superlative advertisement issued by a newly opened private hospital. It promised a special rate for dentistry procedures, including for ” loot canal “treatment”. And it also boasted of a modern ICU or “Incentive Care Unit”- no marks for guessing who gets the “incentive” for keeping a stiff in the ICU long after his/her expiry date. Truth will always out.
In the beginning was the Word and the Word was with God. No longer. It is now with Shashi Tharoor, George Steiner and Kanpur.