Tied by a doting dusk

That assurance of light

In the garb of a brother!

Rakshabandhan! Call it the epithet of universal brotherhood or a treaty of affection and endearment, is celebrated with much fervor throughout the country. In Himachal Pradesh it has assumed different names, which is analogous to the rich tradition of this small hill state. Rakhpunya of Shimla hills, Salonoo or Brakhali of Mandi and Sirmaur, Rakhrunya of Bilaspur; echo of the similar sentiments, embedded in the holdfast of human ethos.  This festival is celebrated on the full moon of the Sawan (the fifth month in the Hindu calendar). The vignette of Himachal Pradesh mirrors a chalcedony of the present and the past.  As per the ancient tradition, Rakh (a pious thread) is tied by the Brahmins round wrists of their patrons on the Punya (Full Moon) to safeguard them against the malevolent elements for a year. In the urban areas, on the contrary, this sacred knot indemnifies and reinvigorates the bond between the brother and the sister. 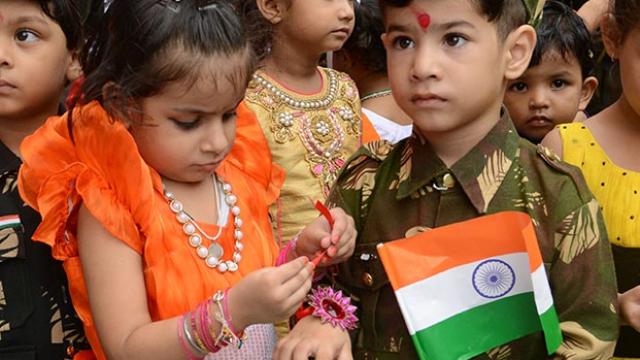 It is believed that the Brahma gave Rakshabandhan to Brahmins as their festival, Dussehra to Kshatriyas, Diwali to traders and Holika (Holi) to Sudras. The ceremony of Rakshabandhana has been described by Hemadri in Vrata as a set of traditional rites which must be performed on the full moon of Shrawan (months of July-August) to ensure peace and prosperity throughout the year. The description also places the importance of Brahmin as the conduit between the Deity and the man, who therefore, deserves to be honored foremost in the ceremony.

The ancient folklore tie the origin of rakshabandhan with the legend of Indra. Lord Indra (the Deva King of thunderstorm and rain) had married Indrani, the daughter of Daitya chief named Puloma. Since, the Deva King was in a precarious war with Asuras, his wife Indrani tied him an amulet (Rakshabandhan), to help him emerge victorious in the battlefield. The battle concluded with the defeat of Daityas. Skand Purana ties the origin of the festival to the tretayuga king Bali who lost his kingdom to Vamana (one of the avataras of Lord Vishnu).However, critics have ruled out this theory stating that the Aryan ruled estates were much lesser in number as compared to the powerful Daitya kingdom of Bali along the Indus river of Punjab. Vamana who has been described as one of the avatars of lord Vishnu must have requested for a piece of land initially in the territory of Bali and later outspread the dominions till the River Indus.

The mention of Rakshabandhan is also found in James Tod’s Annals and Antiquities of Rajasthan, according to which the chivalrous namesake brother of one beautiful Rajput damsel offered her protection in return for the bracelet (Rakhi). Even, emperor Humayun was tied a bracelet by the princess Kurnavati, who pledged her lifelong support and protection. He demonstrated his chivalry through driving away Sultan Bahadur Shah of Gujarat from Chittor as soon he was made aware of the imminent peril by the princess.

If Diwali is the festival of lights, Rakshabandhan is the festival of love and loyalty! The inmates of Model Central Correctional Homes in Nahan and Kaithu have crafted delicious chocolates especially for the occasion. Another trendsetting example which proves that ‘love has no bar’

At last to conclude;

If I were a brother

And offer my hand instead

For a knot as precious