Kullu: Police here have drawn up a new initiative to tackle rising road accidents in district through its “mission zero’ plan.

“Main objective of this initiative is to bring down the number of deaths in road accidents to ‘zero’ across the district,” says Gaurav Singh Superintendent of Police (SP) Kullu.

Talking to media persons, he said that as per available data about 90 to 100 precious lives are lost in road accidents in the district every year. 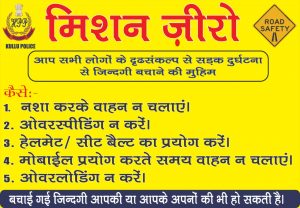 “Though there were many reasons for these accidents taking place but the loss of lives could be reduced to a large extent, if the traffic rules were followed properly,” said Singh.

“That’s the reason for launching ‘mission zero’ in district and we expect the citizens to support us in this initiative,” he added.

Drivers of all vehicles, youths and students in particular, are to be sensitized about the importance of following traffic rules for the sake of their own safety and safety of the passengers traveling with them.

However, offenders would not be spared and should be prepared to face police action, warned the district police chief.

“Traffic violations such as drunken driving, overspeeding, using mobile while driving are going to be handled strictly, afterall it’s the question of saving many precious lives,” he said.

The police officer also stressed upon the need for installing sign boards near all black spots in district where accidents occur frequently so as to alert the vehicle drivers about the lurking dangers on the roads.