Having won the mandate by raising heightened national security concerns; paradoxically, the Government has proposed Rs. 4.3 trillion for defence purposes, a mere 2.04 percent of GDP estimates, which is even lesser than last years 2.14 % allocation.

5th of July, 2019 will go down in the history of Indian Polity as one of the most significant days marking two unique events on the floor of Indian Parliament; one – the unveiling of Union Budget by country’s maiden full-time Finance Minister, Nirmala Sitharaman & two – vis a vis, a first of its kind presentation of this financial blueprint, decked up with ‘high aspirational intent but scrupulously low numerical content’.

Article 112 (1) of the Indian Constitution outlines Union Budget as a statement of estimated receipts & expenditures of Government of India for a given year. In fact, Budget in more precise terms refers to an Annual Financial Statement comprising monetary allocations against the announced schemes or devised frameworks. But, indeed, for the first time ever in 70 years of our Independent history, a Union Budget was tabled across in the Parliament with such dismal fiscal numbers.

Undoubtedly, in any budget “Outlines” – defining the goals & plans of the government are central but, at the same time these outlines need to be backed up with substantial monetary “Outlays” to drive the desired “Outcomes”. For example, the 10 point Vision for decade, highlighted in the introduction of Union Budget, outlines an ambitious target of making India a US $ 5 trillion economy in the next ten years but, ironically, some of the most critical points like Environment, Health etc. as mentioned in this Decade Plan do not even find a single budgetary allocation except for a wordy remark.

Asserting BJP’s massive mandate in the 2019 General Elections, Finance Minister said that people’s hearts were now filled with Aasha (hope), Vishwas (trust) & Akanksha (aspirations). No doubt, people’s aspirations are paramount in building & running large economies like India but, with more than 70 million people still living under abject poverty(according to World Poverty Clock), filling of stomachs is far more essential to ensure their hearts are pumping rather than filling it with mere intent. Invariably, the budget failed to introduce any new scheme directed towards poverty alleviation from its source or to even provide any additional Direct Benefit Scheme to the poor. 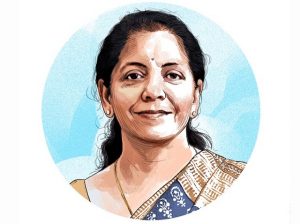 Albeit, innovative experiments like introduction of NCMC (National Common Mobility Card) for facilitating easy payment for travel across India; PMKYMS (Pradhan Mantri Karam Yogi Maandhan Scheme) for providing pension benefits to small retailers & shopkeepers (with income under 1.5 crore) and, the flexible interoperability of Aadhar & PAN card numbers for filing ITR (income tax returns), are welcome steps towards easing people’s lives but what modi operandi (pun intended) will be used will eventually decide the course of these new schemes & experiments.

Having premised their entire election campaign on ideals of extreme nationalism & heightened national security concerns; paradoxically, this Government has allotted Rs. 4.3 trillion for defence purposes, which is only 2.04 percent of the total estimated GDP & is even lesser than the allocations made in previous fiscal year, which stood at nearly 2.14 percent. Also, in an unwelcome move, the excise duty/cess on crude oil was increased by Re. 1 per litre, which eventually will be hitting the pockets of common man with surge in fuel price & its derivatives. Despairingly, farmers have been conveniently left out with no mention of any new incentivised scheme in the Budget. Though, the government aims to set up 10,000 Farmer Producer Organisations in the next five years, but again, no concrete allocations have been made in this regard.

With education budget pegged at nearly 3 percent of the total GDP, the allotted percentage is also one of the lowest amongst a majority nations in the world. In the yester-years many leading educationists & field experts have been pushing various Governments holding office to increase allocations upto 6 percent but the same has not found any actual budgetary thrust. Nevertheless, the proposed New National Education Policy & National Research Foundation to foster research oriented study are a welcome move towards setting up of a comprehensive educational framework.

The flagships programmes of Modi 1.0 regime like Ujjwala Yojana, Saubhagya Yojana & Pradhan Mantri Awas Yojana have been extended till 2022 to achieve the targets of providing clean cooking fuel, 100 percent rural electrification & of providing housing for all, respectively.

Also, a very distinctive measure was put forth by FM in the budget, for raising capital for social enterprises & voluntary organisations by setting up a Social Stock Exchange under the ambit of SEBI. This is indeed a ground-breaking step allowing related enterprises to get listed & to raise capital as equity or debt etc. Throughout the budget session, the FM, also highlighted the need for building vital infrastructure, creating a digital economy & on furthering their support for MSMEs. Start-ups were the focal point of attention in this Budget, with FM announcing relaxation of norms pertaining to angel tax, easing e-verification mechanisms & even proposing to run a TV program specifically for facilitating/enhancing start-ups to investors ties. Again, most of these measures or initiatives proposed by the Government are pertinent in order to change & to challenge the status quo but their efficacy needs to be corroborated unequivocally by concrete ground actions than by mere intent.