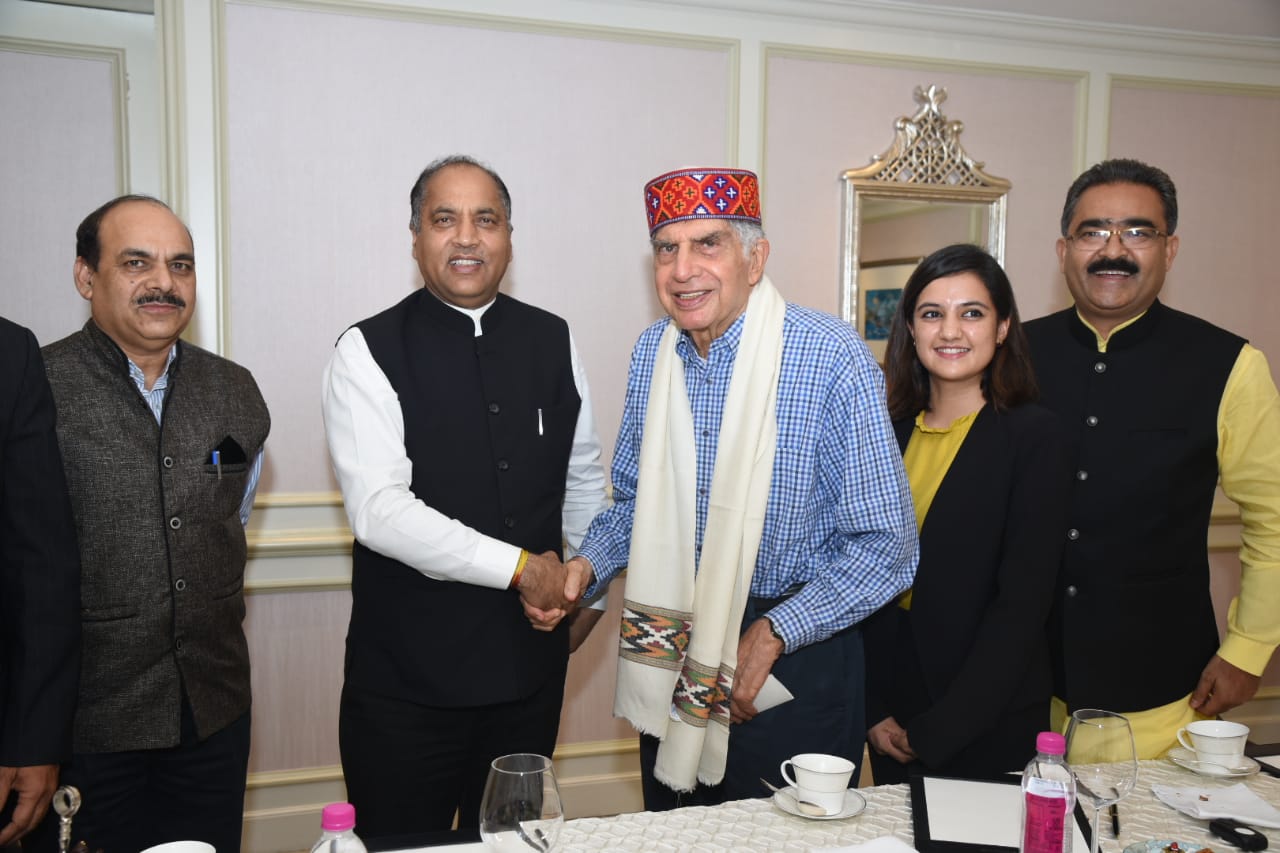 On return from Dubai, it was a hectic day for the chief minister who held back to back meeting with the leading business houses and requested them to consider exploring investment avenues particularly in the areas of tourism, IT, electric vehicle manufacturing  and others.

With the transport sector witnessing a shift from diesel and petrol vehicles to electric vehicles Thakur said that there was immense scope for manufacturing of electric batteries. The locations of Baddi, Parwanoo and Nalagarh are in vicinity of railway heads and the state was providing all basic facilities with uninterrupted electricity supply, he said.

Rattan Tata assured the chief minister that he would ask Chairman of Tata Sons to constitute a task force to explore investment possibilities.

Anand Mahindra showed interest about investing in tourism and real estate sectors. The Group was even willing to partner with the Chief Minister’s initiative of Nayee Rahein, Nayee Manzilein for developing new destinations in the state. About the groups Kandahar and green field hospitality project at Theog, Anand Mahindra said that had drawn up plans to invest Rs. 200 crore.

The Mahindra Group chairman also informed that the group was exploring HP as the next destination for electric vehicles as well as in the areas of intelligent traffic management for smart cities. The group is also keen in implementing enterprise solutions for government bodies. In the ensuing discussion he also showed interest in waste to energy project as there was a vast potential to convert pine cones and needles into energy.

To Adi Godrej, the chief minister made a presentation about increasing the group’s presence in the state in fast moving consumer goods (FMCG) and real estate sectors.He also urged the group to consider setting up a tool room in the state as the company has great expertise in the same.

Adi Godrej informed the delegation that he will send a suitable note to all his businesses and explore business opportunities in the State.

The chief minister also extended an invitation for participating in global Investors Meet that is to be held at Dharamshala in November.

Earlier on a four day tour of United Arab Emirates (UAE) the chief minister held road shows, met the captains of UAE industry, the Indian diaspora, UAE government officials and others to seek investments for the Himalayan state. 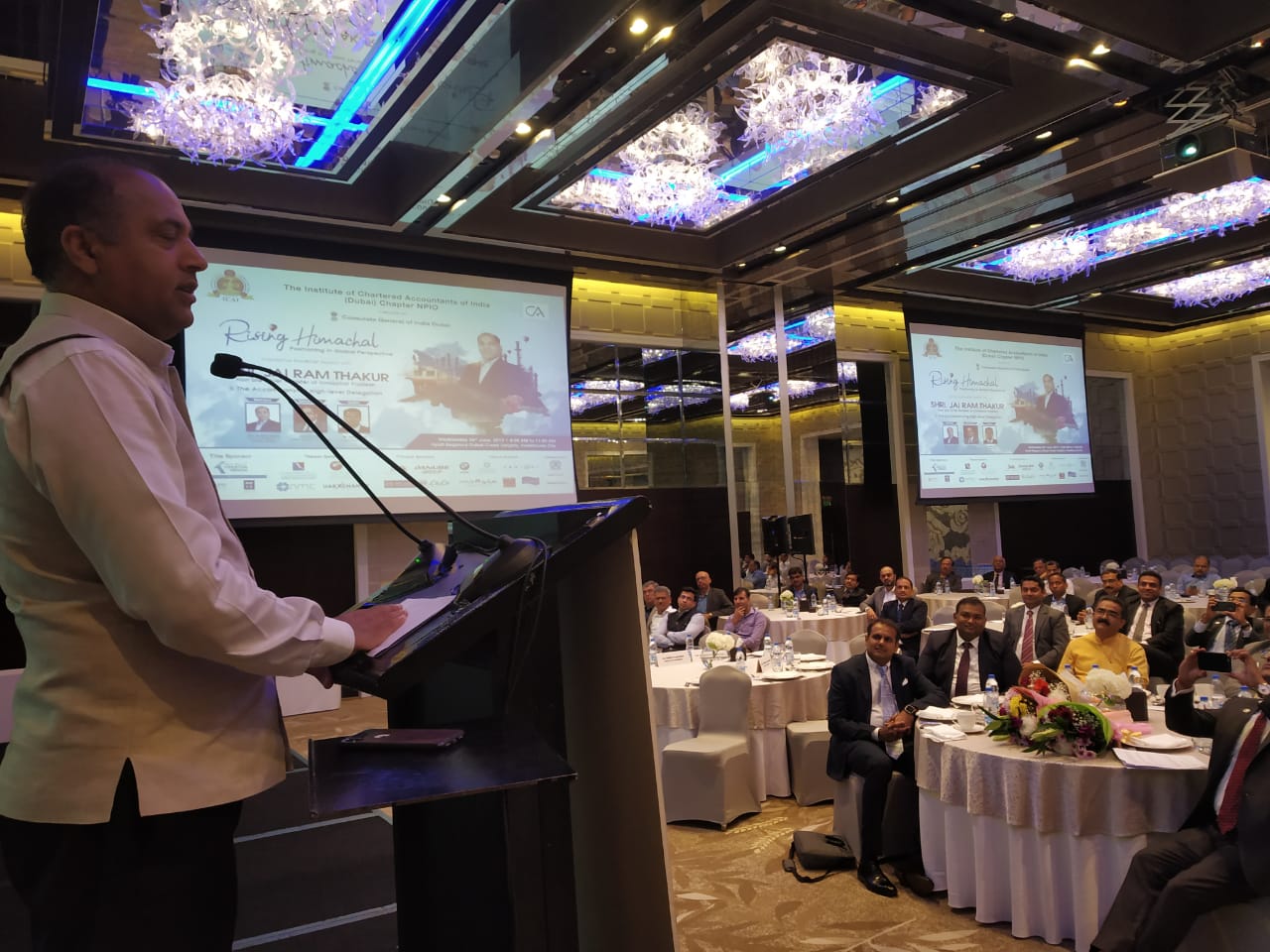 Speaking to the Indian diaspora on Wednesday, Thakur said that Himachal had only recently amended its policy to make the state industry friendly for investors. There is immense potential for investments in sectors like tourism, health & wellness, manufacturing, pharmaceuticals, real estate, hydropower, horticulture and food processing, said Thakur.

In a meeting with Kanishka Gupta, CEO Aujan Holdings, a food processing company with in beverages, especially fruit juices, the chief minister delegation held discussions on procurement of apple concentrate from the State and possibilities of investment opportunities in hotel industry, ‘can’ manufacturing and options for tie up with HPMC.

Another meeting held with Aaditya Sarna, MD, Economic Clusters, United World Infrastructure had the concern express interest in developing  a Smart City Destination in the State.

Rajgarh in Sirmaur district was suggested as destination that could be developed with facilities like theme park, Himachali handicraft and food joints.

Nandi Vardhan Mehta, Head of Finance, KAAF Investments which makes investments globally, in a meeting with the chief minister disclosed that the KAAF only last year had started investing in India. He said that  KAAF was exploring investment opportunities in the large and stable economy of India.

At a road show organised on Wednesday with Chamber of Indian Industries (CII) the chief minister presented Himachal as one of the most visited states of the country by foreign and domestic tourists. “The scenic states offers visitors a variety of choices like adventure, wildlife, eco-tourism, heritage, spiritual, monuments, religious and skiing,” said Thakur.

Addressing members of Institute of Chartered Accountants of India (ICAI) at Dubai the chief minister extended and invitation to the Indian Diaspora for investing in Himachal Pradesh’s growth story.

“Himachal is known as the ‘fruit bowl’ of India and were are a major producer of fruits like apple, plums, apricots, kiwis, walnuts and pears for the country which makes for a great opportunity to invest in food processing and allied industries,” said Thakur.

He explained about various investments in Abu Dhabi and Dubai area and also confirmed that UAE would participate in Global Investors Meet being held at Dharamshala.

At the meeting Mohammed Al Muallem, CEO Jafza and DP World, Muallem said that the group was looking to invest in Himachal Pradesh particularly in the areas of logistics and transportation besides export and import of agriculture and horticulture produce.

On the occasion several MoUs were also signed.

Ramesh Chandra Patidar Group Director MKS Group of Bahrain singed up for investments in a naturopathy resort worth Rs. 100 crore and an affordable housing project worth Rs. 150 crore.

At a meeting with Chandershekhar Bhatia, CEO Nilgiri Trading an MoU was signed between the State Government and  Nomisma, Banking and Financial Advisory, Nilgiri Trading for development of a luxury wedding destination resort. The investment amount was projected at Rs 1000 crore.