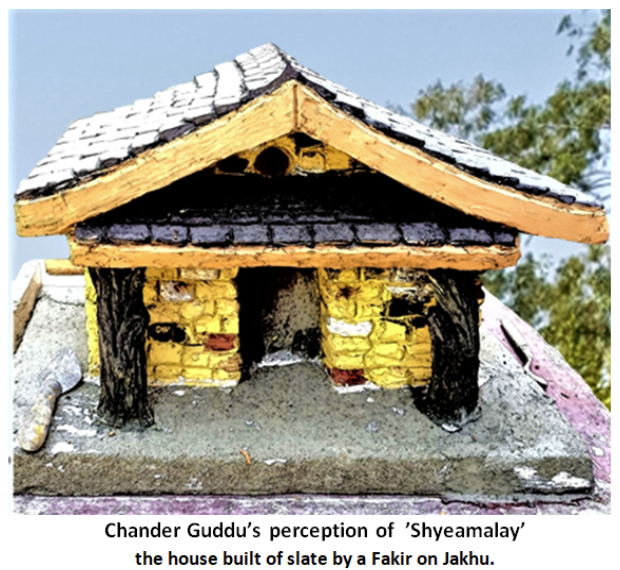 “This is a resting village for us where a fakir offers water to travelers. ..”

is doing vibrant rounds on Whatsapp and social media, over the world with an applaud and a deep sense of nostalgia for those engrossed in the romantic realms of love and passion as also  for music lovers alike. The character of a place, its identity, and its people’s sense of rootedness are shaped by interactions within the place and with other places. This duality affects liveability.

A school of thought speaks about justifying the need to shun British legacies – a sign of slavery and follow the trend of renaming Shimla. It would also ask for change in rhyme and rhythm and lyrics of all those pahadi songs that are resounding on the Shimla Ridge maidan, echoing over the city and through the hills of Himachal.

I have fond memories of the youthful days and our honeymooning with my beloved bride Vishav Kirti in hotel Fountain Blue.

My son Manu Maharaaj was  asked in an interview ‘What is famous about Shimla ?’ ‘Shimla mirich’ was his spontaneous reply. God has bestowed up on him success in life.

A place is distinguished by its people, markets, governments, and institutions, transport as much as it is by its landscape and scenery (including streets and roads), buildings, and boundaries.

I can not forget the blissful evenings at Davicos*,  in the cheerful company of my nieces Madhu and Manju, asking farmaish of ‘Come September’ tune, with live band in attendance, doling out drinks to the band masters till the last call of the bar. Loading my tipsy friend Hazrat, out on a hand pulled rickshaw ; back our home in Dogra Lodge, was a startling experience.

*(Unfortunately burnt out in fire)