The BJP, credit be given to it, is the cat which has jumped off many hot tin roofs but has always landed on its feet.

If Messers Rahul Gandhi, Arvind Kejriwal, Akhilesh Yadav, Prakash Karat and MS Mayawati and Mamta Banerji all find themselves in jail by this time next year (perhaps sooner) if the BJP wins these elections they will have only themselves to blame. The writing has been on the wall for at least three years: the only way to defeat the ruling party was to combine forces, sink their differences, and present a united front (by whatever name called, Sashi Tharoor could have been consulted on the matter). Political parties today in any case are devoid of any genuine ideologies. The BJP’s single point ideology is to cling on to power and pelf, even if it means supping with beef eaters in the north-east, tying up with a “soft separatist” outfit like the PDP in Kashmir, supporting the rights of women on the issue of Triple Talaq but sabotaging them in Sabarimala, beating up Dalits in Gujarat but washing their feet in Allahabad. The BJP, credit be given to it, is the cat which has jumped off many hot tin roofs but has always landed on its feet.

Our above mentioned stalwarts, on the other hand, have perfected the art of landing on their faces. Their single point ideology should have been just as specific and relentless: remove the BJP from power. This was in their own interest as well as that of the country; as the party’s manifesto confirms, if it comes back it will continue to render the country apart with the Citizenship Bill, Articles 370 and 35A in Kashmir, criminalisation of triple talaq, extension of the NRC to the whole country, and the Ram Mandir (other mandirs will inevitably follow, rest assured). There is a very real possibility of its amending the Constitution (it will acquire a majority in the Rajya Sabha by 2022) to remove its secular underpinning and convert the nation to a Hindu Rashtra, ensuring decades of conflict and a rampaging communalism. At a personal level the opposition leadership will be decimated by the ruthless and selective use of investigative agencies. The thousand year Reich will have begun. Are these people so blind that they cannot see it?

Every opinion poll so far, as well as common sense, indicates that the NDA will decline by about 40-45 seats to about 275 but will still have enough in the bag to ensure that Mr. Modi ascends his Hindu samrat throne again. It would have been different if these selfish, small minded opposition leaders had pulled together in just five states: UP, West Bengal, Delhi, Rajasthan and Madhya Pradesh. This could have given them an additional 40-50 seats, further reducing the NDA/BJP’s tally by a similar number, denying them that crucial first invitation from the President to form a government. 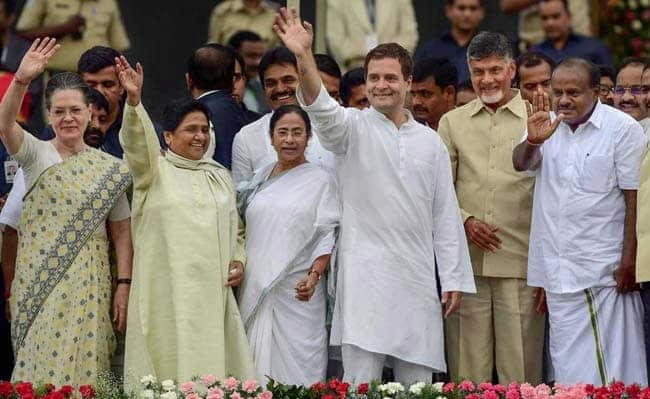 The Congress is the biggest culprit: by refusing the 7 seats it was offered in UP and the 2 in Delhi and contesting separately, it has bailed out the NDA: with the AAP it could have swept all 7 Delhi seats with a margin of at least 10% of the vote share, and in UP the Mahagathbandan could have reduced the NDA to 20-25 seats, a loss of almost 50 seats that it could not possibly recoup elsewhere. Kejriwal too is to blame by imposing conditions for a Delhi alliance( such as seats for the AAP in Haryana and a commitment to statehood for Delhi).  In Bengal, Madhya Pradesh and Rajasthan the delusional Prime Ministerial ambitions of two ladies will take them straight to Tihar in due course but, more importantly for the country, it has deprived the opposition of at least another 20-25 seats. Even that eternal fence sitter and opportunist Mr. Navin Patnaik of Odisha, and that other PM -in- waiting, KCR of Telengana, would have had to think twice before lending support to an NDA well short of a majority. Now its a no-brainer.

Pride goes before a fall. Each and every one of the worthies singled out by me for honourable mention has kept his personal interest and ambition before that of the country. They are all wanna-be Prime Ministers and hence want their own parties to maximise their own seats, at the cost of their “allies”. This is not the time to maximise their individual seats but one to minimise the BJP’s. Some of them want to position themselves for 2024. But as Martin Luther King Jr. said: Nothing in all this world is more dangerous than sincere ignorance or conscientious stupidity. Both have been displayed in abundance: the ignorance of not knowing that, if they lose now, there WILL be no 2024 for most of them, and the stupidity of succumbing to their inflated egos in the false belief that they have got Mr. Modi on the run.

A predator is most dangerous when it is cornered and on the run. This has been amply demonstrated by the manner in which various BJP leaders have cocked a snook at the Election Commission and its anaemic Model Code: train and air boarding passes have Mr. Modi’s photo on them, cops in Noida distribute food with NAMO written on the packets, tea is served on some trains with- you guessed it- the Prime Minister’s unctuous face printed on the cups, NAMO TV continues to publicize his achievements shamelessly in spite of an ECI ban, the armed forces are still being used to appeal for votes notwithstanding a specific prohibition by the ECI, Doordarshan and Tata Sky too give two hoots for the Model Code. Even govt. departments and agencies now have the temerity to show the finger to the ECI. Which is not at all surprising since this once proud body has now covered itself with ordure, the latest piece of excrement being the U turn it has made on the Electoral bonds- it now says it is no longer opposed to them! Its resistance to any increase in the number of VVPAT- EVM matching is an indication of not just pusillanimity but perhaps of complicity. It took the Supreme Court to restore some sanity in the matter.

And if any further proof was needed to convince our MahaMoorkhBandhan leaders of the extent to which a ruthless Mr. Modi would go to ensure a win, it has been there for all to see over the last five weeks- selective and relentless raids by IT and ED on opposition leaders in Andhra Pradesh, Karnataka, Madhya Pradesh, Maharashtra, Goa. 11 leaders targeted, 83 places raided, “hundreds of crores” allegedly seized. Not a single BJP or allied party leader has been raided. Given the track record of these agencies over the last five years, any convictions are highly doubtful. But then conviction was never the aim- the objective was to provide the BJP with more campaigning material, and the party now has more ammunition than does the Indian army.

Can these pampered, egotistical, ill advised chieftains not see that there will only be more of the same if Mr. Modi returns to power? Do they need any more evidence?- then how about this from across the western border: even Imran Khan now believes the chowkidar from Gujarat will win and is looking forward to working with him!

In 2014 the BJP won with just 32% of the national vote. It will not improve on this in 2019. Which means that if a party rejected by almost 70% of the electorate comes back to power it will be due to these opposition politicians; they would have betrayed the country- that they too shall pay for their blunder will be no consolation for the rest of us. There is perhaps still time for a course correction, for last minute, seat-by-seat understandings. If not, then a pox on all their houses ! (which in any case would be attached by the ED in double quick time). The opposition has done its best to ensure the BJP’s return to power. It is now up to Johnny Voter.