Globally the views about medical marijuana are changing and many countries, including many states in USA, have changed their laws to permit cultivation of cannabis for medical purposes, but in the western Himalayan state of Himachal Pradesh in India, considered a hot spot for cultivation of the contraband psychoactive resin product ‘charas’, it is a Catch-22 situation.

Some of the worlds finest hash (charas) strains are grown in the state. And the government is pushing back hard to contain the illegal trade in it.

Catching up with the rest of the world, business startup’s, lawmakers and farmers, particularly from Kullu-Manali valley which is considered the heart of quality cannabis cultivation in Himachal, are demanding that the state government lift the ban on cultivation of the contraband crop and legalize it for farming activity.

Spearheading the demand for a policy to permit cannabis cultivation is Maheshwar Singh, a scion of the Kullu royal family. “Views about medicinal uses of marijuana are changing globally,” he says, “its about time India too revisited the law.”

“Before it was banned, in Kullu-Manali valley,” says Singh, “growing of cannabis was a cottage industry as it’s strong fiber was used to make ‘pula’s, (hemp shoes), ropes and bags. The seed formed part of a stable diet.

Maheshwar Singh is a former BJP state president and a veteran parliamentarian. “I had even first raised the matter in the Lok Sabha,” he said.

Kullu MLA Sunder Singh Thakur went public on with the matter recently. At a media conference the legislator said, “a policy change about legal cannabis cultivation for therapeutic purposes would boost tourism and turn the state into a wellness hub.”

Rising incidence of drug abuse, particularly among the youth, has got the chief minister Jairam Thakur to take a tough stand against the problem. He has asked the police to clip the supply lines and book the peddlers.

Till October, active police teams had seized 416 Kgs of contraband charas, which is not only 36% more than what was caught in 2017, but is the highest catch in the last 8 years.

As the drive is beginning to yield results, advocates for a policy change about cannabis cultivation for medicinal and industrial usages has forced the chief minister to retract on this issue.

“We are having the matter about permitting cannabis cultivation legally examined,” said Jairam Thakur.

With claims about cannabis oil having medicinal and therapeutic properties mounting globally, World Health Organisation at its pre-review November 2017 report held Cannabidiol (CBD), a naturally occurring cannabinoid found in in cannabis plants, to have demonstrated as an effective treatment for epilepsy in several clinical trials. 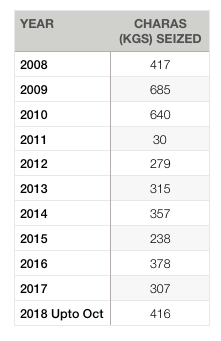 The WHO also held that there was preliminary evidence that CBD may have useful treatment for a number of other medical conditions. It also mentions that there were several unsanctioned CBD medical products with oils, supplements, gums and high concentration extracts available online for treatment of many ailments.

Countries like Germany, Canada, Israel and many states in USA have even modified their narcotic control laws to accommodate CBD as a medicinal product.

However, it is the larger proportion of tetrahydrocanabinol (THC) in comparison to CBD found in some cannabis plant strains that is the problem as it can have a psychoactive reaction in the brain. It was in pursuance of the USA backed 1961 treaty for Single Convention on Narcotics that India banned cannabis cultivation in 1985.

“It was signed under pressure by India because cannabis products are very much a part of the country’s culture and the Ayurveda treatment,” says Maheshwar Singh. “However, the drug abuse aspect of it needs to be kept in check,” he added.

However, Uttarakhand has become the first state in the country to launch a cannabis cultivation pilot project. In July last year, Indian Industrial Hemp Association, a non-profit organisation, was allowed to commercially cultivate cannabis on 1000 hectares of Pauri-Garhwal region for its hemp fibre crop.

Sensing a business opportunity when contraband contraband laws are being challenged, several Startup companies like the Mumbai based Bombay Hemp Co, Bangalore based Namrata Hemp Co are waiting in the wings start legal cultivation of cannabis.

Despite the best of efforts to contain the illegal trade, some hash (charas) from the exotic valleys of Kullu-Manali finds their way into the international market. A list of prize winning hash in the coffee shops of Amsterdam has Manali Cream, Kali Mist, Malana Cream, Warlock, Sunburst, Shanti Baba and Baba’s Holy Balls on their menus. All these brands are said to be sourced from Himachal.

With one gram of this hash priced between 13 to 18 Euro’s, mere 1 Kg of the high grade hash is worth Rs 10 to 14 lakhs in the European market. Just the 4062 Kgs of Charas seized in the last 10 years would be more than Rs 400 to 570 crores in the international market.

With the crop being a goldmine, especially for its drug properties and the cannabis plant found growing  abundantly in the wild, besides being illegally cultivated in some of the poorest parts of the state, the government is caught up in a bind whether to permit its cultivation and generate much needed farm employment or enforce the ban more strictly and contain the illegal drug trade.