Kullu: A delegation of journalists from Mallapuram, Kerala were highly impressed by the Kullvi traditional woollen attire during their visit here on Thursday.

The 36 journalists from Kerala are on a study tour here and met with Kullu media members to know about the rich culture of valley. A formal meeting between them (reporters of Kullu and Kerala) was organised at cooperative society’s conference hall Sarvari. Where they were warmly welcomed by former state minister Satya Prakash Thakur as per Himachali custom by offering Himachali cap and shawls.

This delegation had an opportunity to know about the cooperative system and it’s benefits for people connected with various co-operative societies. Satya Prakash Thakur took all journalist to the campus of Bhuticco industry (world famous for manufacturing Kullvi clothes including shawls, pattu and caps etc.) to let them know about handloom woollen industry’s products in details. All were immensely influenced by richness of Kullvi culture especially beautiful and colourful patterns of traditional cap , shawl and pattu (a woollen blanket woven on handloom). Thakur also told them that today many people of distrct are earning a handsome income through working in handloom sector. 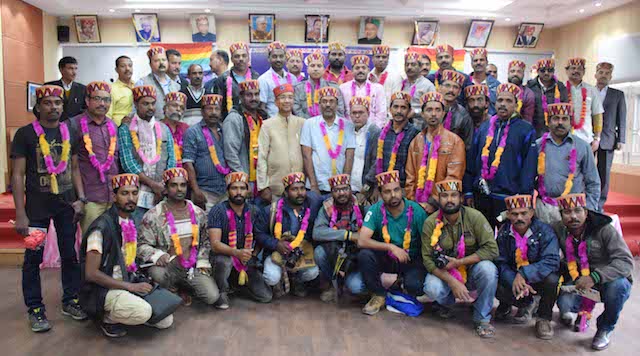 This state is abundantly gifted with beauty wether it is nature, weather, honest hearted people or culture. Beautiful woollen clothes are main attraction of district are enough to flaunt the rich heritage of area.”

Dhanesh Gautam, president of press club of Kullu also echoed the same views and said, ”Though the state government has started taking some positive steps for journalists such as recently a budget of 1 crore was announced for the construction of press club buildings across the state but much more is needed to be done in this regard. There should be a provision of pension for senior and accredited journalists in state.”