Kullu: Holi, the festival of colours, was celebrated with great zeal and fervour in the township with the evening ceremonial burning of  ‘Faag’ (a local word used for the Hindi word Holika Dahan) near Raghunath temple, the presiding deity of Kullu at Raghunathpur.

Though every year this festival is celebrated in accordance with local customs but this year the occasion was special because of the presence of Sage Dhruv,  deity.

Navaneet Bhardwaj, a Raghunathpur resident said to Hill Post, ”Everyone knows that most of our festivals are held in the presence of Lord Raghunath ji and Holi is one of the festivals celebrated so. But this time arrival of Dhruv Rishi (sage) deity after 7 decades has added to the importance of Holi  celebrations. It’s because of the union of two deities on this auspicious occasion that the crowd is larger than normal times,” said Bhardwaj. 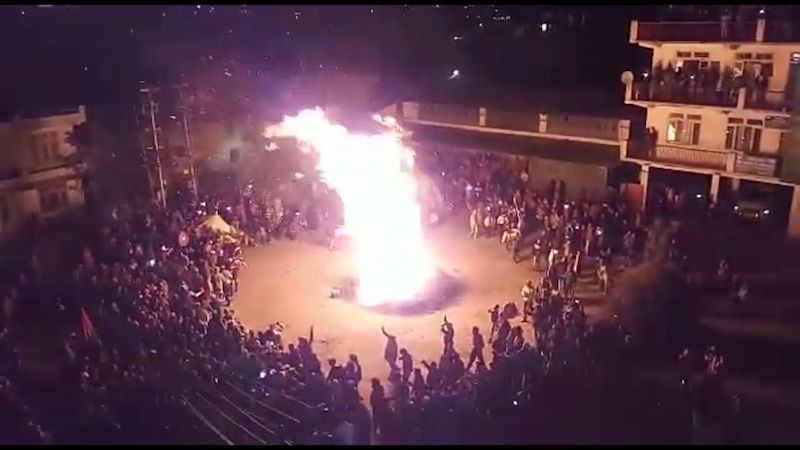 Holi festival of colours is one of the most favourite and much awaited festival in India celebrated by people much fervour. But Holi celebrations at Kullu is unique in itself as the festival ends with the Holika Dahan ceremony whereas Holi in rest of the country while the festival gets started after Holika Dahan across the country. But here before performing Faag burning ritual, people play with colours through the day.

‘Faag’  burning is performed in front of Royal mansion situated at Raghunathpur (also known as Sultanpur) near Lord Raghunath temple every year.

Another important thing that makes the festival unique is starting Holi in Raghunath temple from Basant Panchami which starts around 40 days before Holi. From that very day some of the selected members of Mahant community use to offer colours in presiding deity’s temple in front of His idol until the actual Holi falls.

This year the festival was closed with Faag burning custom at 8 pm on 1st March. The slight difference was the presence of Dhruv Rishi which actually enhanced the celebrations.

Maheshwar Singh, chief deity of Lord Raghunath greeting for festival appealed public to maintain the same devotion and interest towards such wonderful and age old rituals regarding festival celebrations.