Rhetoric, mega ideas and grandstanding alone cannot make India an attractive country for investment or a world leader for, as Shakespeare said: one can smile and smile and still be a villain. 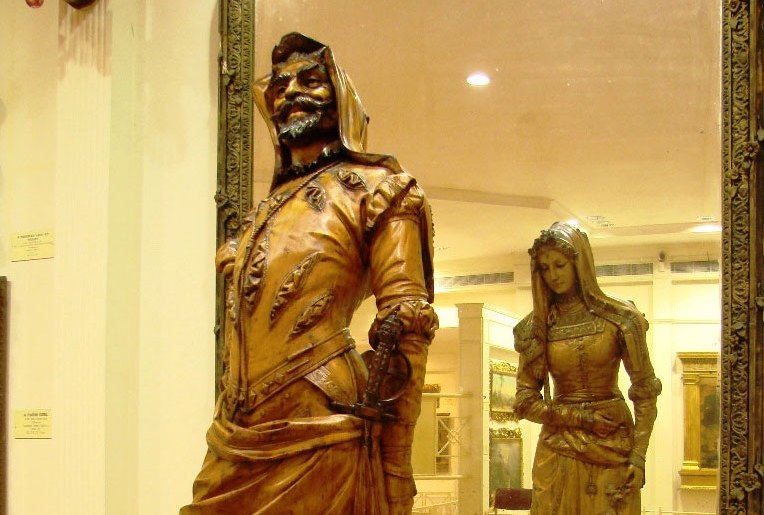 There is a statue in the Salar Jung Museum in Hyderabad which is a faithful mirror image of our Prime Minister’s rhetoric in Davos recently. It is the amazing two-faced statue which has the cruel looking Mephistopheles on one side and the beautiful visage of Margaretta on the other. The latter was on display in Davos, the former is the one most Indians are familiar with back home.

Mr. Modi touched all the right buttons in his speeches to the uber wealthy and powerful in this alpine Gymkhana club: the imperative of globalisation, concerted action on climate change, cross border trade, India’s position as the fastest growing economy in the world, the solicitation for FDI, the political stability that India offers to global investors, the bold tax reforms. Following after President Xi’s act last year at Davos, it would have been impressive but for the fact that certain other developments at the same time made his words ring a bit hollow and less than credible. At the very least they gave the definite impression that the Prime Minister was being selective in his presentations, that he was perhaps masking a darker underside to his narrative.

The balloon was punctured by two reports released the same week- first by the WEF ( World Economic Forum)’s own Inclusive Development Index exposing India as one of the world’s most unequal countries – it placed India at 62 out of 77 countries, below our “poor” neighbours Pakistan, Sri Lanka, Nepal and Bangladesh. This shocking revelation was further confirmed by another international agency – Oxfam reported that 73% of the wealth generated in India last year was cornered by just 1% of its population! This same 1% has appropriated all the additional income generated by economic growth between 1980 and 2014. This is the real and ugly underside of a ruthless pursuit of a pure capitalist driven GDP growth strategy and economic reforms that ignore the ground realities. Policies that cater only to the Sensex, billionaires and big industry but leave in their wake millions unemployed, SMEs ruined and farmers devastated cannot be sustainable even in the mid term. GDP in itself is being globally discredited as the sole indicator of economic progress, and the “trickle down” theory does not work autonomously. If there is no simultaneous investment in social welfare schemes (which has been declining since this govt. came to power) GDP gains cannot be inclusive: the Index of Inequality is as important as the Sensex.

A second area where Mr. Modi’s claims appeared less than convincing was the Environment. The global EPI (Environmental Performance Index) released by the World Economic Forum on the 23rd January revealed that India was the fourth worst country in terms of environmental performance, ranked at 177 among 180 countries; even worse, we had slipped 36 places in the last one year alone. This is not at all surprising given the govt’s track record over the last three years: all environmental regulations have been systematically demolished and the Ministry of Environment and Forests has become the Ministry of “Ease of Doing Business”, projects are being sanctioned on a large scale in highly eco-sensitive zones such as national parks and Tiger Reserves, highways such as the Char Dham one in Uttarakhand being rammed through tens of thousands of trees, rivers are being linked without any EIA studies (1.80 million trees will be felled for the Ken-Betwa linking project alone), a huge chunk of the Western Ghats has been excluded from the ESZ category to accommodate the building and mining lobby. The govt. suffers from the twin illusions that (a) the climate change problem is limited only to replacing fossil fuels with renewables, and (b) that technology alone can provide all the solutions. It is wrong on both counts. As Mr. Al Gore pointed out on a subsequent panel discussion at Davos, the fuel issue is only part of the problem: the larger one is protecting our natural spaces and assets – rivers, mountains, forests, deserts and the millions who depend on them for livelihoods – from degradation, encroachment and ruthless exploitation. And this requires political will, not technology. Mr. Modi’s govt. has to realise this and reverse the dangerous course it has adopted in the interest of GDP growth, as usual!

The third question which the delegates at Davos might have pondered over, even while our Prime Minister was holding forth, was whether India was a country governed by the rule of law or the rule of the mobs? The question was inevitable, given the violence unleashed by the Rajput Karni Sena and associated hooligans over the Padmavat screenings. It took the punch out of the Prime Minister’s speech. The world would have particularly noticed that governments belonging to Mr. Modi’s own ruling party in at least four states defied the Supreme Court in going ahead with the ban in some form or the other, sided with the Sena hoodlums, took no preventive steps to pre-empt violence and were in fact complicit in their illegal and unconstitutional actions. India certainly did not look like a very safe place in which to invest, the ability of both central and state governments to enforce compliance with the law of the land appeared questionable, even the Supreme Court’s effectiveness and legitimacy came under a cloud. All reason enough for even a tourist to think twice before coming to India, let alone someone with a few billion dollars to invest. These developments would not have gone unnoticed at Davos.

Mr. Jaitley’s subsequent budget has raised more questions than provided answers: the promised MSP increase for the Rabi crop is nowhere in place and the new National Health Protection Scheme is only a rehashed version of the 2016 Rashtriya Swasthya Bima Yojana which has been a non-starter: participation in it is less than 30% with as many as seven states opting out of it. The budget for the promised 1.50 lakh “wellness centres” is nowhere in sight. The NHPS will certainly be a bonanza for the Insurance companies (as the crop insurance scheme has been) but the 500 million “beneficiaries” may not benefit all that much.

Rhetoric, mega ideas and grandstanding alone cannot make India an attractive country for investment or a world leader for, as Shakespeare said: one can smile and smile and still be a villain. If the face of Mephistopheles has to be removed from that statue the government will have to do a radical rethinking of the values and principles behind its policies and stop thinking of merely the next election. A “pakoda” cannot be a symbol of genuine progress.