The Week magazine has always been pro Congress. Its latest issue dated 03 December 2017 is devoted to the perceived transformation and resurgence of Rahul Gandhi (RG) as a politician and leader of substance. Media and politics have always shared beds in India with honesty and objectivity often becoming casualties in this unholy alliance. The latest issue of The Week just proves this point.

Consider this. Here is a 47 year old man, who possibly had access to the best political grooming in the country and yet he is what he is. He entered active politics in 2004 when he stood for elections to the national parliament from Amethi – a Gandhi bastion from where a Gandhi could never lose. He has been a Member of Parliament (MP) for over 13 years now. Meanwhile he has also progressed in the party hierarchy to become a Vice President primarily because of his name and the ever present political sycophancy within the party. His performance in parliament over the years has been nothing short of pathetic with no recognisable contribution even when his party was in power. He has maintained a stoic silence on most major or controversial issues – be it within his party or outside. Today even after such a long career in politics at top level he does not have the wisdom and grace to acknowledge the transformation of the Indian society where a common man has risen to the highest elected office in Indian democracy. Instead he revels in ridiculing and taking pot shots at the humble origins of the Prime Minister. Surely nothing can be more base or crass than this. One may not like Mr Modi in his individual capacity but his singular achievement cannot be belittled or ignored.  This in nutshell is RG who aspires to be the Prime Minister of India! 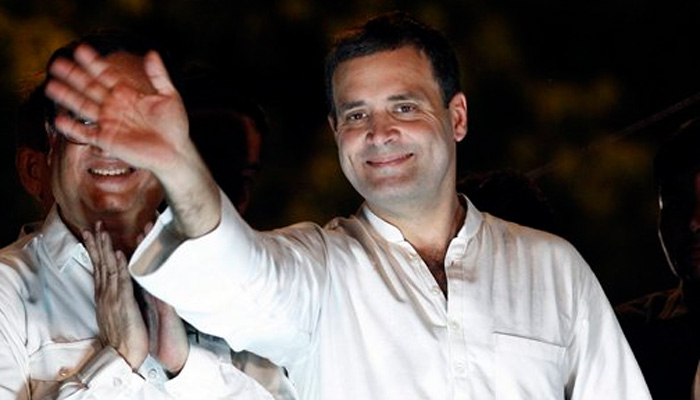 The Week magazine makes interesting reading not because of any positive transformation of RG over the years but rather for the proverbial King’s New Clothes attitude of party leaders who fail to call a spade a spade. His last visit to USA at the behest of Mr Sam Pitroda is being expounded as the turning point in Rahul’s career and his progression to a leader of serious acumen. His whole visit was about ranting against Mr Modi, his policies and spreading a false message about the rise of right wing Hindu forces under BJP rule. Without a doubt he is entitled to his opinion but does that give him the liberty to spread half truths that are derogatory to nation’s image abroad? When any politician, including a leader from the opposition, goes abroad, he goes there as an ambassador of the nation – and ambassadors are charged with looking after their nation’s interests and not to run it down. If running down ones nation in foreign lands is transformation – then a nation is perhaps better off without such transformed leaders.

Mr Shashi Tharoor, Sachin Pilot and Milind Deora are some of the more prominent names who have contributed to this special issue of The Week. They have gone overboard in eulogising RG and are euphoric over his transformation, particularly after his last US tour. Their assessment is mainly based on the increased frequency of witty one–liners, sarcastic jibes, some extempore interventions in Lok Sabha, photo – ops in Dalit homes and greater focus on public approachability for which RG is in the news of late. They feel that by all this RG has reinvented himself and is today a more confident, sure footed and meaningful politician who can take on the likes of Mr Modi effectively. But what they miss out, possibly deliberately, is to quantify or assess the impact that all this is having on the Indian voter in an unbiased manner. Is transformation limited to witty one liners and jibes – many of which are given on a platter to Mr Gandhi by his media team? While RG has been very vociferous on the problems faced by farmers, small businesses, dalits and common man in the last three years – has he ever offered any worthwhile solutions? Has he introspected on why a Dalit continues to languish at the bottom of the development pyramid despite Congress ruling the nation for 60 of the total 70 years since 1947? Does he have any answers why his own constituency Amethi continues to be one of the more backward areas of the nation despite being a Gandhi backyard for decades? Does he have any explanation why the Congress party makes a mockery of internal organisational elections? Why is it that hardly anyone from his party leadership can claim to have risen after a long and arduous journey starting from a foot soldier? Does he sincerely believe that he is the best candidate for the top position in the party?

Nearly all RG’s speeches and arguments are based on the issues of demonetisation, introduction of GST, polarisation of the Indian society, failure of Make in India, lack of job creation and problems faced by farmers. All his attacks on Mr Modi centre on these issues. Frankly demonetisation is done and dusted. Without a doubt there were short term problems for some sections of the society but it would be foolish to assume that most are still living with the same.  The fact that it has motivated many to migrate to mainstream economy too cannot be overlooked and sooner or later others too will follow suit. GST has certainly come with many teething problems but to government’s credit it has been fairly proactive in resolving issues that have come up so far. To cut short the argument it may be sufficient to say that Congress would never have displayed the political will to introduce this game changing legislation despite the fact that it was a prerequisite for India of the future.

Polarisation of Indian society has been an ongoing process since independence due to reservation and minority appeasement policies of successive Congress governments. This resulted in the majority population being sidelined and suppression of Hindu voice for too long. What is seen today as an attempt at polarisation or rise of right wing Hinduism is nothing but a few more Hindu voices that are demanding their rightful place in the Indian society. Their methodology can be debated but not their intent. Unfortunately opposition parties, minority community leaders, pseudo liberals and social activists deliberately term this as a polarisation drive since they are afraid of losing their privileged positions and curtailment of their selfish agendas. Lastly Make in India and job creation are related subjects and it would be impossible for a government to make a major difference in these in a matter of two or three years when no proper foundations were laid for the same in last two decades by earlier governments. RG saying today that he and his party will solve farmers’ and youth’s problems in six months is only political rhetoric aimed at votes. Does he have any answers why successive Congress governments could not do it for six decades what he now promises to do in six months?

Elections in India cannot be won by witty one liners or jibes or by visits to USA. Whatever crowds may have gathered in USA to listen to the Gandhi scion must have come more out of curiosity born from less than favourable reputation that precedes RG where ever he goes. Surely very few would have come based on an urge to listen to a knowledgeable and committed future Indian leader of substance. For a lot of Indian Diaspora in USA an event like this is invariably an excuse to get together and feel connected with home. In all probability this was partly true for the crowds that thronged Mr Modi’s rallies also. But the difference lies in the fact that while Mr Modi had already proved himself by guiding his party to victory in India, Rahul is still trying to find his feet in Indian politics. If after being in thick of politics for a decade and half, RG had to go to USA to discover or to transform himself then that speaks volumes about his abilities – or rather lack of abilities. It is also believed that Congress has hired the services of Cambridge Analytica (CA), a London based company that specialises in mapping voter behaviour based on their digital footprints by studying their psychological profiles. This is then used to guide a politician to say what the public in a selected society or region expects to hear. This is akin to transforming a politician into a robot to mouth what is fed to him. Perhaps this suits RG because left to himself he only specialises in scoring self goals.

One wonders what RG eulogisers will say after results of Himachal Pradesh and Gujarat elections are declared by end of December 2017. It goes without saying no blame will be attributable to RG. It does appear that the famous story of Emperor’s New Clothes by Hans Christ1an Andersen is being enacted and re-enacted in Congress party with Rahul being the Emperor that no one wants to displease. The earlier that young child who blew the lid on the Emperor’s New Clothes surfaces, the better it will be for the party.  But then the question is will a young one of that character ever surface within the Congress?