Shimla: Nand Lal Sharma has been appointed Chairman & Managing Director of public sector SJVN Limited by Government of India. Prior to this Sharma was holding the post of Director (Personnel) since 22nd March 2011.  He succeeds RN Misra, who retired on 30th November, 2017. 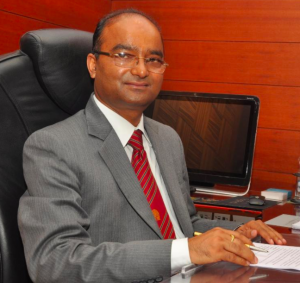 Sharma studied at Government Schools in District Bilaspur and Una, is a B.Sc. (Agriculture) from Dr. Y S Parmar University of Horticulture and Forestry, Solan, where he was  Gold Medalist in 1985 . He  did his M.Sc. (Agricultural Economics) from H.P. Agricultural University, Palampur with Honours Certificate in 1987 and completed his MBA from Faculty of Economics, University of Slovenia (Europe).

He has vast experience of  28 years  in various personnel and  administration functions. Under  his leadership, Change Management and Strategic HR in SJVN has been exhibited through the implementation of various innovative HR strategies in SJVN including revisiting the vision, mission and objective of SJVN. He has played a crucial role in the best performance of the company and its re-modeling of business plan.  As per his vision, the effective implementation of Balanced Scorecard to achieve organizational targets has resulted in Excellent MOU rating for the past five years.