Dharamshala: Vice-Chancellor of Himachal Agriculture University Prof Ashok Kumar Sarial declared that the university had been able to unravel horsegram genome sequence paving the way for developing genomic tools which can aid genomics-assisted breeding in this potential crop.

While announcing the release of draft genome sequence of horsegram (locally known as Kulthi) variety HPK4 (Baizu), in Palampur Prof Sarial on Wednesday said that this was the first report of its kind in his university where a team of scientists has been able to complete the whole genome sequencing of any crop plant species.

He said that the programme was funded by the Department of Science & Technology, Govt. of India and Japan Society for the Promotion of Science, Govt of Japan for two years and appreciated the hard work of the scientists Dr. Rakesh Kumar Chahota and Dr. TR Sharma, Professors in the Department of Agricultural Biotechnology and Dr. Sachiko Isobe, Head, Laboratory of Plant Genomics, Kazusa DNA Research Institute, Chiba, Japan for accomplishing the task as this is a crop with no genomic information previously available. 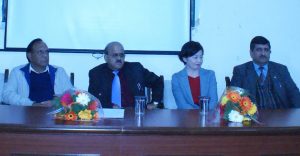 The Vice-Chancellor said, “unravelling of horsegram genome sequence shall pave the way for developing genomic tools which can aid genomics-assisted breeding in this underutilized potential pulse crop and identify key genes responsible for economic traits.”

Vice-Chancellor asked the scientists to take this work further through translational research using the information emanating from this study.He asked the students to take advantage of various Indo-Japan Exchange programmes and imbibe Japanese in their excellent work and contribute to the nation building by hard work and scientific innovations.

Dr.RS Jamwal, Director of Research and Dr. H.K.Chaudhary highlighted the importance of this research work and told that horse gram was an indigenous legume of North-Western Himalayan region having many nutraceutical properties. It is highly suitable for rain fed and marginal agriculture and has a potential to cover the risk of dry land agriculture. Due to its survival capability under drought-like conditions, it has been designated as the ‘Crop of Future’.

Horsegram seed is a rich source of phosphorus, iron, and vitamins and contains many medicinal and therapeutic benefits. It is also suggested as an Ayurvedic medicine to treat edema, piles, and renal stones.

Dr. Rakesh Chahota highlighted the importance of this study for the improvement and development of horse gram as a commercial crop.

Dr. Sachiko Isobe, Principal Investigator from Japan gave the detailed account of genome sequencing of this legume crop and briefed the audience about the identification of 36, 000 genes in this crop species which can be precisely utilized in future breeding programmes.