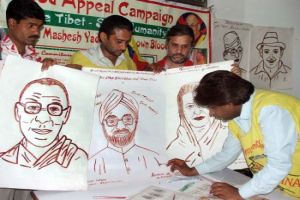 Moved by â€™s brutality and â€™s woes, Dr. Mahesh Yadav, a world peace and free activist also known as the â€˜blood campaignerâ€™ is going on with a blood campaign for a free since 4th November, 1996. On the eve of Holi, he blood painted the face of the Chinese President in a poster and marked another protest against the killing of innocent Tibetans in .

He plans to continue with his peaceful way of protest with an aim to put pressure on to free and let peace remain. He has also written a blood appeal to the President and the Prime minister of , the President of USA, Secretary General of UNO, European Parliament and world leaders and institutions to take a just stand in the matter and not shun it.