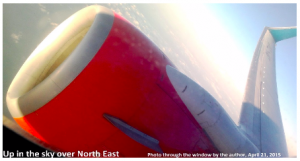 Sky is the limit for Dr. Mukul Sangma as far as the progress of his state goes. Development of road infrastructure and air connectivity is Meghalaya’s priority.

For enabling operation of larger aircraft in Umroi, the only airport of Meghalaya, additional land has been acquired for expansion of runway & handed over to the Airport Authority of India. Another small airport is planned near Tura. There is also a helicopter service connecting Shillong to Guwahati and Tura.

Urbanization is taking place rapidly. Shillong is a specimen of typical hill architecture where half-timbered structures have been rather swamped by lots of drab modern concrete; efforts are on towards slum free city and towns. 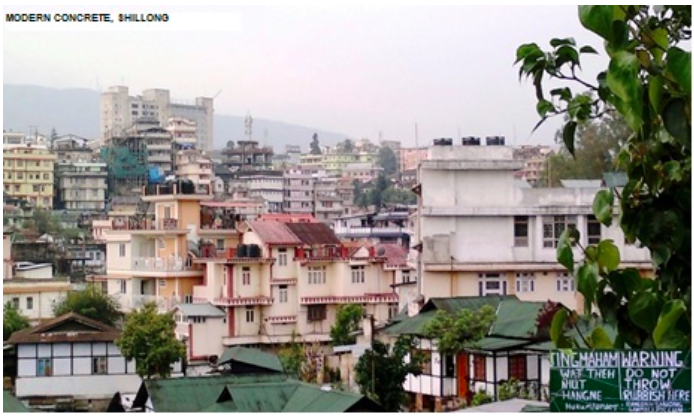 “We have missed out on human capital investment which should have been the top priority of every government to ensure rapid development in the society through enlightened, productive and responsible youths”, he says. 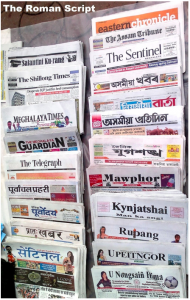 Actions are afoot right from a skill development programme for masons being conducted at Polytechnic, Shillong to encouraging the budding authors to bring out their literary works. . Of late, unemployed youths are steadily looking forward to form cooperative societies and undertake nontraditional activities in sectors like IT, Tourism and Energy. At the same time, the Government has launched a new scheme for extending financial assistance to infirms and widows and pension to differently abled persons. Moreover, the acceleration in the development of the socio-economic set-up of Meghalaya, the society has evolved enormously. “Social mobilization is the key to success of every developmental programme”,

The history of formal education in Meghalaya has been a recent one commencing with the formulation of a Khasi Alphabet in 1842 similarly for the Garo Hills areas, a Garo Alphabet was evolved in 1902. The first college in fact was established in Shillong only in 1924 by the Christian Brothers of Ireland. “At present that is the only Government College”, says Mrs. Mukul.

Early morning while we look at the arranged heap of the newspapers with the vendor on the street, Mr. Jibonsing explains that the script is Roman for khasi and Garo languages. 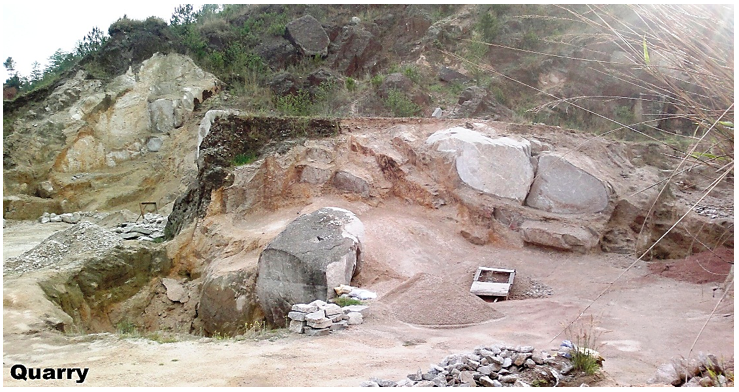 There is ‘Umbrella Meghalaya State Forest Development Agency’ in order to coordinate the afforestation programmes effectively, preservation & conservation of critical catchment and eco-sensitive areas. This will also help in addressing the problem of climate change. 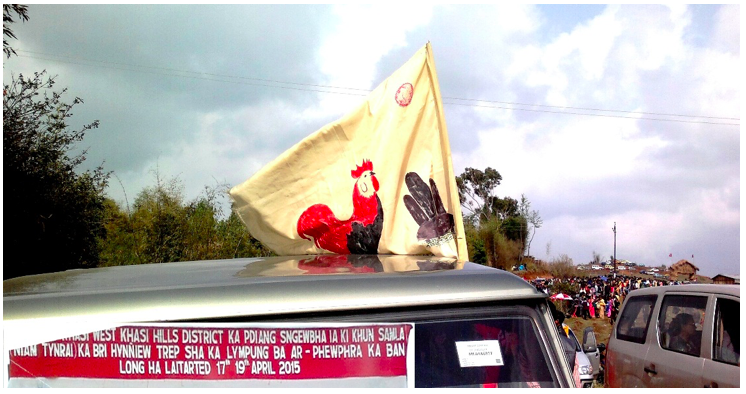 In a bid to bring Northeastern India closer to the rest of the country, a festival titled “Songs and Dances of the North-East” was recently hosted in New Delhi by the Meghalaya government and sponsored by the North Eastern Council. “An International Centre for Performing Arts and Culture is being set up at Mawkasiang, about 11 km from Shillong,” which will have infrastructure of the international standards to host events of performing arts, cultural fiestas and musical fests. The major scheme of the Arts and Culture Department is the Intensive Arts and Culture Development Programme (IACDP) with the objective of promoting indigenous folk and tribal arts and culture and vanishing art forms in the field of music, dance and drama.

Tour to Cherrapunji was interesting. From Shillong the road to Cherrapunji through the East Khasi Hills winds through dense pine and oak forests, full of ferns and orchids. ‘The shape of orchids varies from simple, ordinary type to the extraordinary, including some remarkable blossoms that may look like insects, birds, parts of the human body, etc.’ We were later explained by Md. Jawahar Ali of Assam UNA who came all the way to  Gauhati Air Port  with the parting gifts from his North Eastern Nursery. 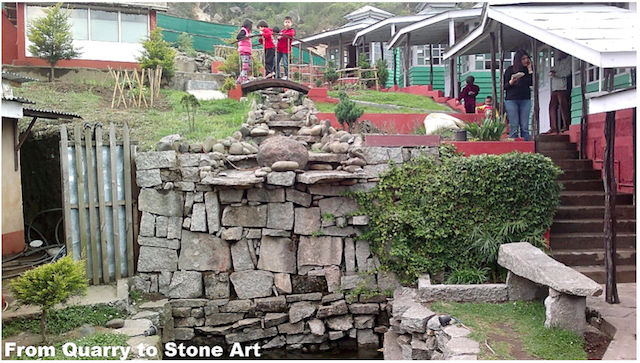 On the way, a little ahead on the diversion from the road to Cherrapunji, was going on a Festival where Hindus of various clans (Parishads) congregate once in five years on the appointed venue. Banners with ‘Cock Symbol’ were a glare over the crowd. The land reverberated with the sound of perfect rhythm, beautiful songs and traditional instruments. Dances connected with the festival were held in open. Dressing up and wearing ornaments forms important component of not only dance but daily life as well, tells Pankaj Deka, Secretary General, Meghalya UNA. He also says ‘Meghalaya is the homeland mainly of the Khasis, the Jaintias and the Garos who have a matrilineal society. Descent is traced through the mother, but the father plays an important role in the material and mental life of the family.’

Under the Cultural Exchange Programme there have been performances of cultural troupe of Himachal & Meghalya in the past, I am reminded.

Large areas in Meghalaya fall under ecologically fragile zone. All along the stretch leading to Chirrapunji, excavations are going on.  Mining that involves cutting down and leveling of hill tops and slopes may not only change the natural landscape but will also pose a serious threat to the environment and ecology. ‘Environment Management Plan’ provides for controlling the environmental damage, restoration and reclamation of mined areas & that vigorous efforts are on to conserve bio-diversity and ecology as well as augmenting livelihood sources of the rural population’, I am told.

However, in order not to impede legitimate socio economic development of such areas, excavation of masonry stones and ordinary clay, coal etc. for bona fide personal requirements of the inhabitants as also artisans who prepare earthen pots on a cottage industry basis; of the area are exempted. 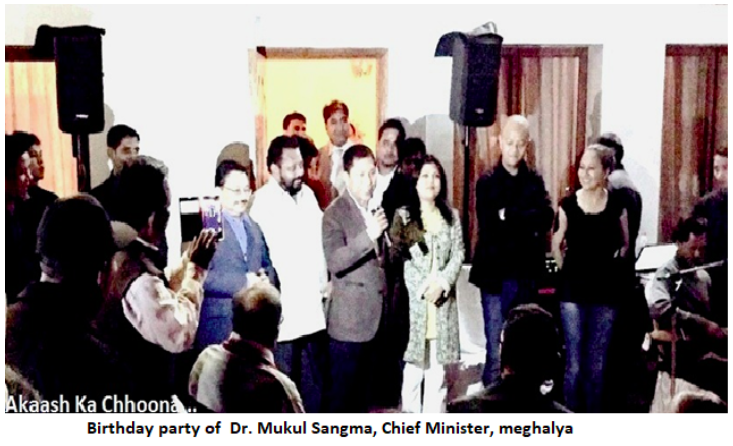 Bamboo symbolizes strength so it means to Meghalya. ‘Bamboo is an important resource in our socio-economic and cultural context. It is fast growing, widespread, renewable, versatile and environment-enhancing resource’ Mr.Pankaj Deka adds. At Cherrapunji while viewing Falls, we have a look at the articles of art and craft as souvenirs. Sticks of cinnamon, turmeric bulbs, black pepper, areca nut, tezpatta,  etc are sold for a song; delicious ‘orange- flower honey’ is another special commodity. “Meghalaya’s turmeric, particularly the variety that is grown in Shangpung in the Jaintia Hills, is considered the best in the world and its curcumine content is very high, I have recently exported a truck load”, tells Pankaj. 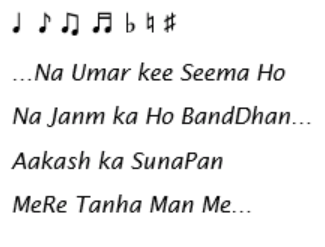 During my morning walk, the next day, minutes away from Shillong’s bazaar, I was in Earle Holiday home where, I learn, the campaign had started, to many local ears as heresy; ‘how to overthrow that tradition’. A group named Syngkhong Rympei Thymmai (SRT, which when translated means ‘a new hearth’). Calling their stir a men’s liberation movement, their objective is to convert the centuries’ old matrilineal system of Khasi succession into a patrilineal one.

Today, it is the SRT that is leading its agenda and is resisted not only by Khasi traditionalists, but also by some scholars, arguing that the matrilineal system is not detrimental to the status of men; & that although women are custodians of property and the family line is traced through them, they wield little actual power. Earlier, in 1961, a debate held in a hall in Cherrapunji bazaar turned exceptionally heated, a group of women accosted ILM (Iktiar Longbriew Manbriew: ‘The authority to live a proper life’) activists as they were leaving the hall. Some of them bore knives. 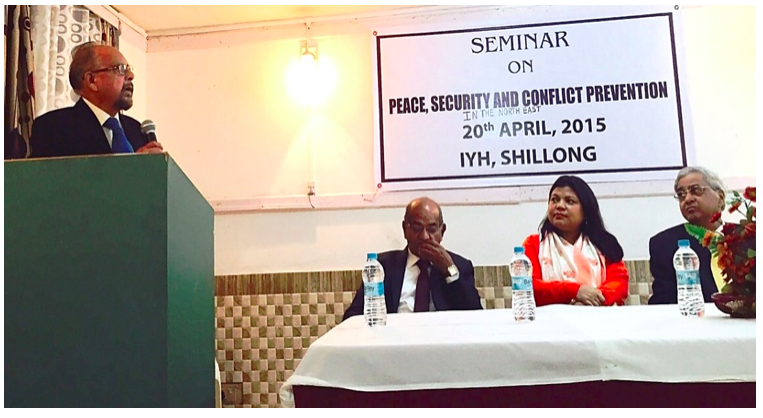 David Roy’s observation of the Meghalyan matrilineal society that ‘a man is the defender of the woman, but the woman is the keeper of his trust’, is synonymous with Mrs. and Mr. Mukul Sangma. During the IFUNA conference, while in Shillong, she remained our host and companion, extending warm hospitality in absence of her husband who got stuck up elsewhere because of sudden drop in air connectivity. Mrs. Dikkanchi Shirra also graced the conference on “Peace, Security and Conflict Prevention in the North East” as the Chief Guest. The evening party on Mukul’s birthday was a treat and the ambience, superb.

‘There is plenty & variety to eat.However, the staple food of the people is rice; foods they prepare are similar to rest of the North East region says Mr. Jibonsing, The Asst,Director of sports, Meghalya, while taking me around eateries, the other morning. On the entrance of a temple, was displayed among other things a basket full of turmeric bulbs, I was reminded of our Cherrapunji trip , Mr.Thrumen Sangma, from Electricity deptt, of Meghalya bought me a sample to carry home.