Dharamshala: Speaker Brij Behari Lal Butail  of Congress having retired from  electoral politics has set up an keen contest for the Palampur seat where his son Ashish Butail, a new comer on a Congress ticket is up against Indu Goswami, the BJP Mahila Morcha president.

Spoilsport to this contest is Praveen Sharma, a former BJP MLA who defeated BBL Butail in 2007, but was denied the ticket by the party, despite senior party leader Shanta Kumar endorsing his candidature. Sharma has entered the fray as an independent.

Denying Praveen Sharma another chance BJP decided to field its state president of Mahila Morcha Ms Indu Goswami, who claimed “ It is only me, who requested the national leadership of BJP to give at least 10 Assembly seats to women in the current Assembly elections and  I am grateful to the national leadership of party that it has now given 6 Assembly seats to women this time.”

Indu Goswami is said  to be close to Prime Minister Narendra Modi as she has worked with him during the days when Modi was party  in charge of Himachal.

While the Congress chose to put its bet on the tried and tested politically established Butail family by fielding the Speaker’s son, the BJP chose is experimenting with a new face — Indu Goswami. Goswami also has the tag of an outsider as she hails from the adjoining Baijnath constituency, which is reserved for a Scheduled Caste candidate.

In the Last elections of 2012 Sudhir Sharma, son of Sant Ram Sharma, a Congress leader from Baijnath  shifted to Dharamshala as Baijnath reserved for a Scheduled Caste candidate. He did defeat local BJP hero and Gaddi leader Kishan Kapoor .

Gowswami having close links with the Prime Minister, it is being watched whether Modi will address a rally at Palampur in her support. Presence of Praveen Sharma as an Independent could dampen Goswami’s prospects. He is close to Shanta Kumar and a lot will depend on the former CM’s stance in Palampur, his hometown.

Ashish (39) has been entrusted with the responsibility of carrying on the political legacy of his family. His father is a widely respected leader with impeccable integrity, but the issue of the Congress promoting dynastic politics has miffed the party workers. Moreover, the Congress candidate could face opposition from Gokul Butail, his cousin who is the IT Adviser to the Chief Minister Virbhadra Singh, and had also applied for ticket but was denied.

Below is the list of winners and runners-up in the Palampur assembly elections conducted so far: 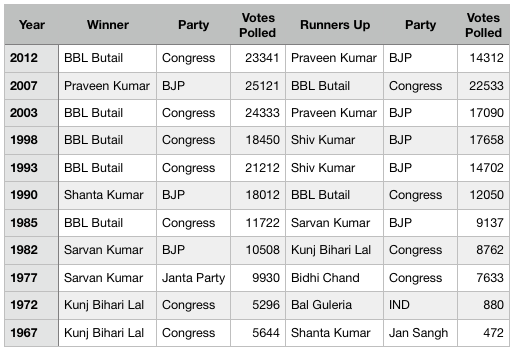