There is a supreme irony and incongruity in the fact that the most docile, humble and giving of animals- the cow- has in India become the symbol of hate and intolerance on one side and of fear and intimidation on the other. I do not want to get into politics this week- frankly, I’m sick of it as no doubt you too are, dear reader- but the extreme positions adopted on this meek animal speaks volumes of the crudeness and ignorance that has entered public discourse in these trying times. The Middle Path espoused by Buddha is no longer an option, it appears; instead, the words of a spoofed-up Confucius make more sense: ” Man who walk in middle of road get run over !”

The BJP will have us believe that the cow is a threatened species: nothing can be further from the truth. The last cattle census puts their population at 180 million, and growing at a healthy 6% annually. More cows die of starvation in gaushalas, cattle pounds and on the streets (mainly by ingesting plastic) than are smuggled abroad- another bug-bear claim by the govt. Most of the big abattoirs and automated meat packing companies are owned by Hindus. And yet an impression is being sought to be spread that the cow is in danger (from a certain community, by implication) and all true Hindus must come to its succour. And so comedy becomes farce. The VHP has demanded a Cow Ministry at the center. Madhya Pradesh has introduced an Ambulance service for cows. The Union govt., having biometricised (not the same as circumcised) every living (and dead) Indian, and has launched a pilot project for an Aadhar type ID for cows. This is endemic lunacy on a sub continental scale.

The other side of the divide is equally bonkers and ridicules for each and every dimension of the raging cow debate: opposing gaushalas as a waste of public funds and ridiculing the age-old beliefs in the value of the cow’s by-products. On the 10th of August this year hundreds of scientists across the country took out a “March for Science” urging the govt. to stop the propagation of “obscurantist and unscientific” ideas. They were particularly incensed at the govt. providing funds to the CSIR for “Panchgavya” – research to establish scientifically the beneficial properties of cow products, including its urine and dung. Why this cloistered mind set ? Tradition and ancient literature should not be scoffed at under the guise of science. I have been personally using a number of cow based products of the Patanjali range for some time now: GONYLE (a phenoil substitute made out of cow urine), MOSTICK (a herbal mosquito repellent) and an agarbatti (dhoop) made out of cow dung. I find them far superior to the standard branded stuff in the market, especially because they are completely free of any harmful chemicals. My maid, in fact, refuses to use any phenoil except Gonyle because, she says, it doesn’t irritate the skin on her hands like the chemical based phenoils do!

I am convinced that the cow is an economic power-house if only we approached its potential rationally and not for electoral purposes with hare brained schemes. I recollect that in 2008-09 I had, on the instructions of the then Chief Minister, visited a number of gaushalas and “sansthas” in UP to study at first hand the many uses of cow products. I was so impressed with the potential that I had submitted a detailed report to him on my return, recommending that we also start pilot projects on similar lines in HP. Establishing “gaushalas” or “gausadans” as economic (not political) units would serve a double purpose- provide a hospice for ailing and/or abandoned cows and produce Panchgavya products as an alternative to the harmful, chemical based stuff that we are exhorted to consume by TV ads. everyday. Over time these units can become financially self sufficient. Why must we perpetually wait for a Baba Ramdev to come up with new and novel economic models ? Unfortunately, I never heard anything about my proposal thereafter, even though the gentleman was a BJP Chief Minister- but I guess cow politics was not in fashion then!

With a long weekend here, I don’t want to end on a dismal note about the long suffering bovine; so, in order to cheer up the reader, I’m sharing below a vision of the future sent to me by an old school pal ( yes, some of them are still alive and kicking!): No, his name is not George Orwell. 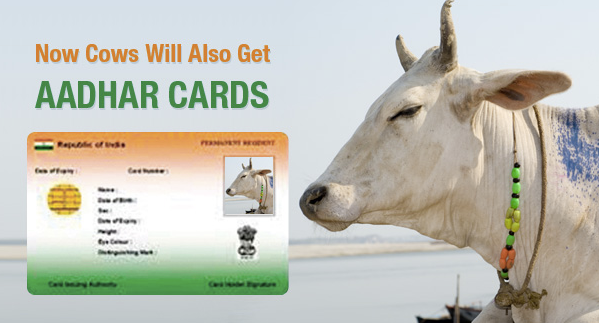 Phone rings……..
Municipal Corporation Delhi (MCD): Haalo?
Ram: Haan hello, there is a dead cow lying outside our house — can you please come and remove it?
MCD: Are you sure it’s a cow?
Ram: What?
MCD: Are you sure it’s a cow – not a horse, or goat?
Ram: Well, looks like a cow, has two horns, an udder…
MCD: Forget all that. Does it have a Cowdhaar bar code on its ear?
Ram: A what?
MCD: A Cowdhaar bar code. Just as your Aadhaar card has biometric information, every registered cow is now required to have a bar code attached to its ear that contains all relevant details.
Ram: ‘Wait, let me check — no I can’t see any bar code.
MCD: An unregistered cow — that’s going to be a problem.
Ram: Is there something I can do — I don’t want it lying outside the house?
MCD: You need to get a ‘No Objection Certificate’ from the local Gau Rakshak Dal leader, duly attested by the panchayat head or district magistrate as well as the local police chief.
Ram: Why do I need that?
MCD: You don’t, Sahib, but I do. See, if I take away a cow that does not have a valid Cowdhaar code, then someone later can claim it was taken illegally. And the Gau Rakshaks will not spare me.
Ram: I don’t even know there was a local Gau Rakshak Dal — how do I get hold of them?
MCD: Dial 1800 Gau Mata — they will assist you.
Ram: Okay, then you will come to pick up the cow?
MCD: Sure, as long as you have the death certificate.
Ram: For a cow? Who will give me a death certificate from a cow?
MCD: Any licensed Gau-ne-cow-logist, with a Hindu priest as a witness.
Ram: What’s a Gau-ne-cow-logist?
MCD: A doctor who specialises in bovine medicine — it’s the latest field of study in our medical schools. With over 180 million potential patients, whose lives are all very valuable to society, there is a lot of money to be made!
Ram: Ok, so NoC, followed by death certificate — then you pick up the cow?
MCD: We need a release form from the district animal welfare unit — basically that the cow is not someone else’s property and that you have the right to ask me to take it away.
Ram: But it’s dead!!
MCD: And that makes it even more important — if it were a live cow, would you even be calling me?
Ram: No, but this is ridiculous — how long will it take to get the release form?
MCD: It depends, some animal welfare officers require you to place the ad for 14 days, others for an entire month.
Ram: An ad??? What kind of ad?
MCD: Basically like a missing person’s ad — you place it in two local papers, one English and one vernacular — asking if anyone has claim to the cow. Take a picture of the cow and submit it along with any identification marks.
Ram: But in 14 days, the carcass would rot completely — what’s the point of your coming then?
MCD: The point is that we need to follow the rules and regulations so that everyone’s interest is protected — especially that of the cow!
Ram: This is ludicrous. You know what, I’m just going to get a few people and pick it up myself and move it.
MCD: I would strongly advise you against doing that.
Ram: Why — who’s going to stop me?
MCD: Your local Gau Rakshak Dal, for one — all calls to this number are being recorded. So the fact that you have a dead cow at your house is already known to the various authorities, and they will expect you to contact them for the relevant forms. And fees.
Ram: Fees?
MCD: Of course — do you think the NoC, death certificate etc. come for free? It will cost you 5-15,000 rupees by the time you’re done.
Ram: That’s extortion!
MCD: No, just the new e-cow-nomics!