Remnants of British Era are still so prominent in our lives, that we refuse to give up the feudal hangover and being an English medium becomes an measure of our knowledge. The enormity of English cannot be denied in our lives today.

Yes, English is just not a language but it is so diligently embraced and imbibed as the high flown language that it has attained the tag of being the official medium of communication in our social lives.

Despite of being aware of the fact that majority of the Indians converse in their mother tongue, we still emphasise the significance of being in an English medium that even children in their tender years are constantly pressurized to speak fluently in the foreign language.

Like all earnest parents who desire their kids to become fuller human beings through English medium education, my parents too, emphasised the significance of the subject quite early in my life. 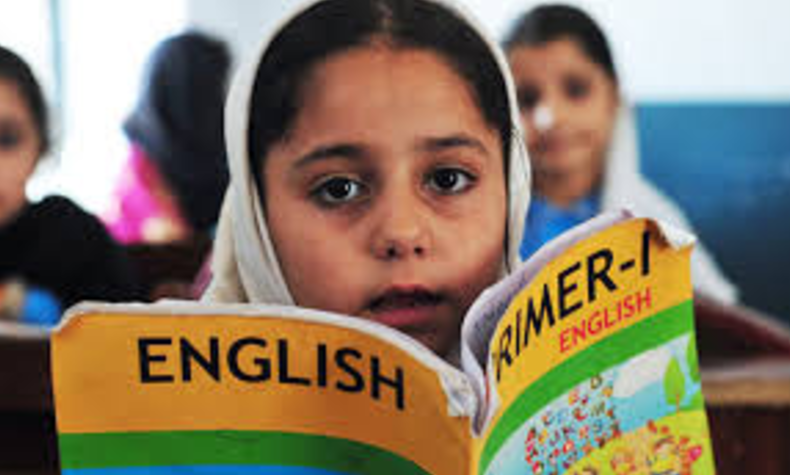 Dad being a Fauji was well conversant in the official medium, but the Punjabi medium had left an everlasting effect on his vocabulary. The teachers of government school taught him subjects and topics in such a way that they became his life lessons with a strong base . What the Hindi medium school taught him, even the military academy could not undo that.

The foundation of the Hindi medium education was so strong that even the convent educated or students from private schools could not compete with him, except for his spoken english or the pronunciation part.

There were many awkward moments for him, with flashes of insecurities creeping in, at times.

Though he could put any foreigner to shame through his knowledge about the english grammar and formation of sentences, but when it came to conversations it was limited to monosyllables.

Over the years he picked up the nuances of conversation in the english language but some things still fail to change him. For instance, his love for food takes him to various food joints and restaurants, but when he asks for the ‘Menu’ card, it becomes the ‘Meenu’ card though the initial embarrassment has now been taken over by laughter’s, over such lunch dates. But dad is not ready to drop the extra ‘e’ from the word, while calling it out loud and clear to the waiter, each time he places his order, and no, there are no astrological reasons behind it, the reason is purely his local lessons .

It takes him some time, when he watches a Hollywood flick to comprehend the English dialogues, though subtitles come as some relief for him.

On the other hand, I cannot read the signboards in punjabi while travelling and always look up to his assistance., which he proudly reads out. Well this adds on like a feather to his cap, apart from knowing Hindi and english.

I still remember, how desperately my parents wanted me to join a convent school, despite of being aware that the nuns at the convent before admitting me, would put me and them, under scanner along with gruelling and grilling session of questions , basically testing our knowledge  about our spoken English .

The moment the nun at the convent asked me to recite an English poem, I stubbornly refused to do so and only embarrassed my parents in the process. The nun appeared to be an absolute despot to demure me.

Further on I added to their woes by constantly asking about the things kept on the table of the Principal in the language coming under my comfort zone.

How lowly I appeared to my parents at that time for speaking in our own mother tongue that they must have considered about disowning me at that very moment.

It was only subsequently that I realised English was mandatory  and Hindi was an optional subject along with its poor cousins Sanskrit and Urdu for the education imparted by the prestigious school.

The demand of the universal language has graduated from job interviews to school going kindergarten kids. Large hoardings of english medium schools and coaching classes are not only limited to grownups but are now on the radar for tiny tots also.

These days there is a mad rush amongst parents to enrol their children in English schools and some are so eager they want to ensure an enrolment even before the child is born. Panic grips the parents at the very thought of not getting admission a suitable school for their kids.

Grooming classes with fluent english speaking are in the offering for the primary kids as well as these classes bloom and mushroom in every nook and corner.

One funny word I have been hearing or rather bearing throughout my life is the way many people rip apart the majestical ‘Lion’. This is not confined to kids only but I have confronted many adults using the word in famous Ajeet style from the film “Zanjeer” , by pronouncing it as ‘Looin’.

Britishers introduced the English on the Indian soil to produce Babu’s so as to have a regular supply of manpower for clerical jobs, not knowing that it would soon become an indispensable parts of our lives to the extent that it has become the language of aspiration and an indicator of upward social mobility.

From BPOs to sales persons in the air-conditioned malls, the pizza delivery guys or the girls at the saloons, all are eager to climb the ladder of success, with the usage of the language.

Learning or speaking a foreign language is nothing to condemn about, but let it not be a barrier or further sub-divide the classes or masses. Pushing oneself into a lesser known territory is an act of great will, but downgrading a person on his or her abilities of speaking in English is no measure of judging people.

Let’s not make language a barrier in judging people, whether one speaks impeccable English or Hindi, both are languages, and a person speaking cannot be put in the category of being a feral or being inept at handling things or performing a task.

Let’s change this feudal mindset where we get impressed by the english speakers and empathise or deride the others, because language is no criteria for adjudging someone’s intelligence quotient.

Let teach our kids to be equally at ease with vernaculars. Let them be oblivious of the human language divide we have created, by erasing the superficialities and going deeper for a strong foundation.